ST. PETERSBURG, Fla. - For the second week in a row, protestors in St. Petersburg staged a "sleep-in" on the steps of City Hall ahead of a crucial vote on rent control – but this time, the protest brought out both St. Pete police officers and Pinellas County deputies.

Deputies lined the lawn of a nearby county courthouse to keep protesters off the grass where they'd staged last week's overnight demonstration. Overnight, the protesters moved to the steps of City Hall, and set up a few tents on the sidewalk. However, as storms rolled through and to avoid further conflict, most left – but promised to return before the afternoon City Council meeting.

They were previously told they need to have their tents moved by 7 a.m. Thursday or they could face more citations and fines. They initially planned to stay until the meeting, which is scheduled for 1:30 p.m.

St. Petersburg Police Chief Anthony Holloway was on scene Wednesday night to issue warnings, followed by a citation over tents protesters set up on the sidewalk in front of City Hall. 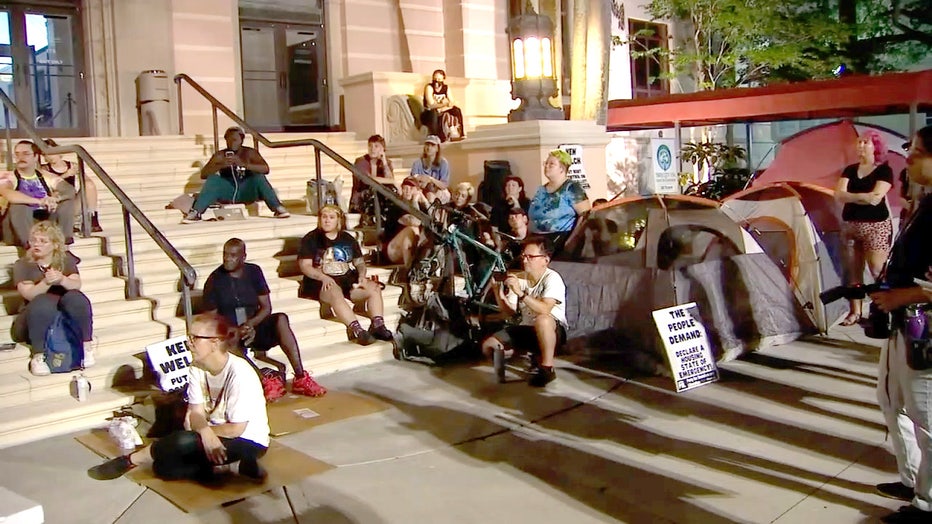 St. Pete protesters took their message to the steps of City Hall, hoping City Council members will decide to place a rent-control measure on the November ballot. Tents were placed in front of the building.

Reverend Andy Oliver with the Allendale United Methodist Church volunteered to take the $93 citation. Police warned Oliver he could be cited a second time or arrested if he did not remove the tents after eight hours.

"$93 is well spent and if I have to get arrested, I will," said Oliver. "We need our City Council to have the same amount of urgency to solve this problem."

Protestors said they are trying to drive home the point that if something doesn’t change regarding rent, they could be outside sleeping in tents permanently. Local city leaders said they’re doing all they can, legally, to help. There are concerns if they move forward with a rent-control ballot measure, that it not only could spur lawsuits, but those against the measure said it could incentivize landlords to drive up rent before the vote and scare off developers from building more affordable housing. 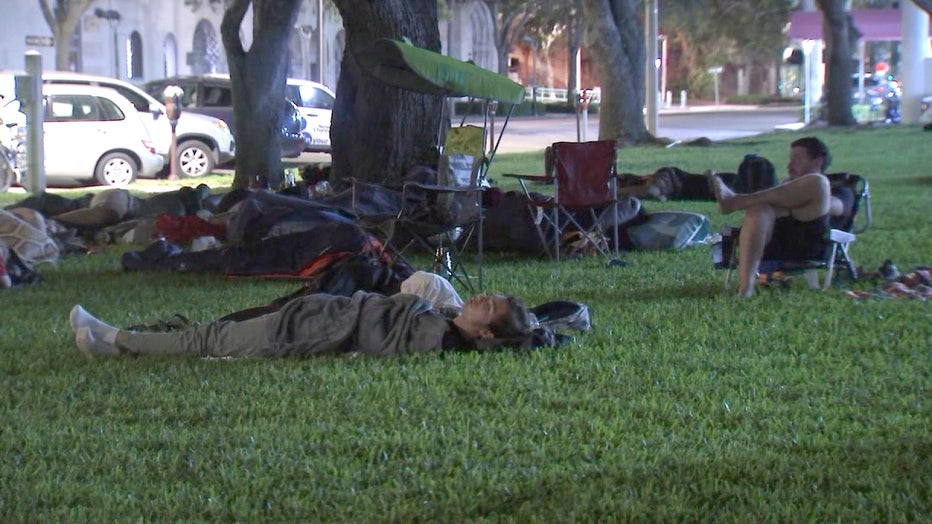 In their first protest during the first week of August, demonstrators slept in the grassy area across from City Hall.

On Thursday afternoon, St. Pete City Council will hold an emergency meeting to discuss adding a rent stabilization ordinance to the November ballot.

According to the text of the ordinance, some landlords would be unable to increase a tenant's rent by more than the annual average percentage increase of the Consumer Price Index for the previous year, or about 9%.

If approved, the rent cap would go into effect for one year.

"This is sort of a stopgap measure. On average, rent increases in normal times are between one and 2%. We've seen a 30-35% increase over the last two years. This is just untenable," said St. Pete Tenants Union representative Jack Wallace. "People can't afford it and people are becoming homeless because of it."

The City of St. Petersburg continues the process of picking a developer to reshape the land Tropicana Field currently sits on.

Earlier this year, council members on the Housing, Land Use, and Transportation committee voted against declaring a housing emergency.

Wallace is hopeful, that this time, council members will at least put it on the November ballot, so voters can decide.

While St. Pete council members voted 4-3 in favor of drafting resolution language last week, Thursday's emergency meeting will likely prove far more contentious. City legal advisors warn any ordinance passed by voters will likely lead to costly legal challenges that will freeze the measure before its able to help anyone.

Mayor Ken Welch has also voiced opposition to the potential ballot measure, saying it would exacerbate the current housing crisis.

"The urgency of the issue doesn’t justify doing something that would make the situation worse. That’s why I oppose rent control and that’s why the Tampa City Council turned it down," said Welch.

Since 1977, Florida law has prohibited local governments from passing their own rent control measures, unless voters approve a housing emergency declaration. The law includes several types of housing that are exempt from any type of rent control measure, including an exception for "luxury" apartments, which the law defines as anything with a monthly rent over $250.

A proposal to declare a housing state of emergency and allow Tampa voters to decide whether to set a cap on rent increases has failed.

"Luxury housing from the 1970s at $250 is today, with inflation, what, $1,200? That’s not a realistic number," said Tampa City Councilman Guido Maniscalco.

While tenants are hard-pressed to find rentals under $1,200 in today's current market, Welch believes even fewer affordable homes will exist if councilors move forward with adding rent control to the November ballot.

"There's an incentive to raise the rent," said Welch. "It’s a huge loophole."

It's one of the biggest criticisms of the November ballot measure Orange County has proposed. Opponents argue the ordinance will only make the housing crisis worse by incentivizing landlords to drive up rents before the vote and scaring off developers from building the low- and middle-income housing Florida desperately needs.

Thursday's emergency meeting will be open to the public and begins at 1:30 p.m.