Good Day takes a ride on a Zamboni

On days of Lightning home games, the only street-legal Zamboni picks up fans around downtown Tampa and drops them off at Amalie. On this day, their only stop is at FOX 13.

TAMPA, Fla. - When the Lightning team rolls back into town for Game 3, fans could take the opportunity to hop on a Zamboni to head to Amalie Arena.

You may have already seen it around downtown Tampa before a regular-season game – it's called the Tampa Bay Ice Box.

The brains behind it, Mark Farrell, didn’t just take a Zamboni from the ice and headed out on the road. It’s two different vehicles, combined as one.

"This actually goes on the road. It’s completely street-legal. We can take it anywhere around the U.S. if we want to," he explained during a visit on Good Day Tampa Bay. "We tried to license a Zamboni by itself but the state wouldn’t do it so we came up with the idea of taking a van, slicing off the back and placing a full Zamboni on back of that."

Because of this, he says it is the only Zamboni on the road in the entire country.

And it belongs to Bolts fan. 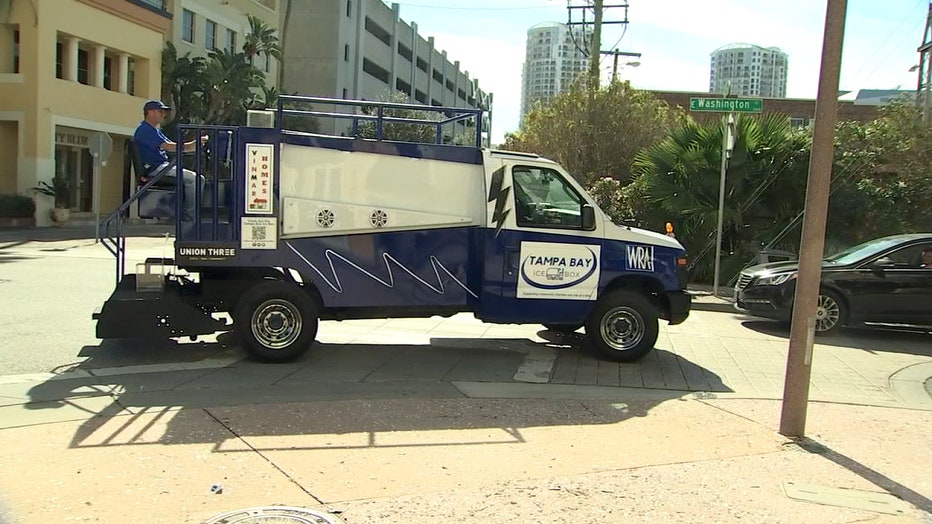 The Tampa Bay Ice Box picks up fans about an hour and a half before a home game, starting at the Pour House at Grand Central on Kennedy Boulevard. They make their way along Morgan Street. If they’re full, they drop off the fans at Amalie Arena.

If not, they head over to Franklin Street. Then, they repeat the route.

"Every time, we get about 14 people we go to the arena," Farrell explained. "We get about five runs in before the game starts. We got great music that plays. We got a horn that blows. We take them all to the game for free. We ask them as they get off to support the three charities that we support with this project."

Lightning fans can take a Zamboni to and from Lightning games for a good cause.