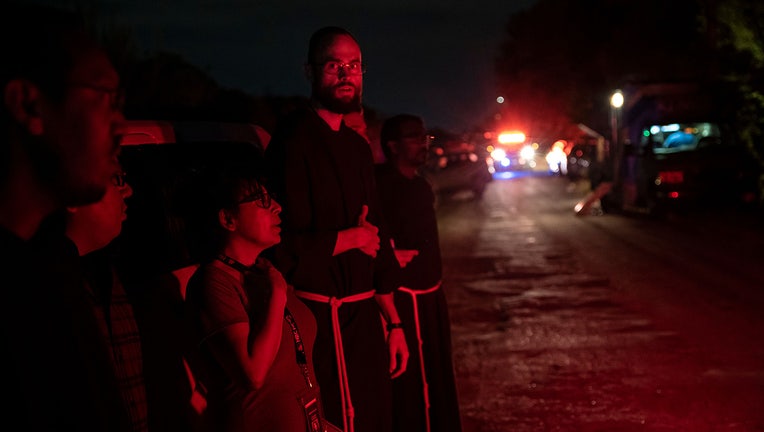 Local priests from the San Antonio Archdiocese stand near the scene where a tractor-trailer was discovered with migrants inside outside San Antonio, Texas on June 27, 2022. (Photo by SERGIO FLORES/AFP via Getty Images)

Fifty people have died after being abandoned in a tractor-trailer on a remote back road in the sweltering Texas heat. It's the latest tragedy to claim the lives of migrants smuggled across the border from Mexico to the U.S.

The home countries of all of the migrants were not immediately known, but officials say some were from Mexico, Guatemala and Honduras.

Here's a look at other similar tragedies over the last several years.

— June 27, 2022: 50 suspected immigrants were found dead in a sweltering trailer on a remote back road in southwestern San Antonio.

— October 23, 2019: 39 Vietnamese migrants were found dead in a truck trailer in Essex, England. Four men were jailed for manslaughter.

— July 23, 2017: Eight immigrants were found dead in a sweltering trailer at a San Antonio Walmart parking lot. Two others died later in hospitals. The driver was sentenced to life in prison.

— Feb. 20, 2017: 13 African migrants suffocated inside a shipping container while being transported between two towns in Libya. A total of 69 migrants, most from Mali, were packed into the container, according to the local Red Crescent branch.

— Aug. 27, 2015: Austrian police discovered an abandoned truck containing the bodies of 71 migrants, including eight children, from Iraq, Syria and Afghanistan. The truck, found along a highway, had crossed into Austria from Hungary.

— April 4, 2009: 35 Afghan migrants suffocated inside a shipping container in southwestern Pakistan. Authorities said that more than 100 people were packed inside the container.

— April 9, 2008: 54 Burmese migrants suffocated in the back of an airtight refrigerated truck in Ranong, Thailand.

— May 14, 2003: 19 migrants died inside a sweltering tractor-trailer while they traveled from South Texas to Houston.

— June 18, 2000: 58 Chinese immigrants were found dead inside a truck in the English port town of Dover. The Dutch truck had transported the immigrants across the English Channel from Belgium. Two people survived.

Dozens of migrants found in tractor-trailer in Texas

Those in the trailer were part of a presumed migrant smuggling attempt into the United States, and the investigation is being led by U.S. Homeland Security Investigations. Three people were taken into custody.