TAMPA, Fla. - In black and white, a poll by the Tampa Bay Partnership shows stark differences in how Blacks and whites view race relations.

The study of 450 people in Hillsborough, Pinellas, Pasco and Hernando counties shows 89 percent of Blacks believe racism exists in their community versus 59 percent of whites.

There is a similar gulf in whether new civil rights laws are needed, or whether the legacy of slavery is still having an impact.

Big majorities of Blacks want Confederate statues down, to redirect police funding to education and community services, and to provide reparations for slavery.

Less than 40 percent of whites want those things.

The Tampa Bay Partnership did the study to identify how businesses can work to close the gap.

"This is not something that will be fixed overnight, but I will say it is not an excuse to take our time," said Rick Homans, the CEO of the partnership. "There is a great sense of urgency that there is a moment now." 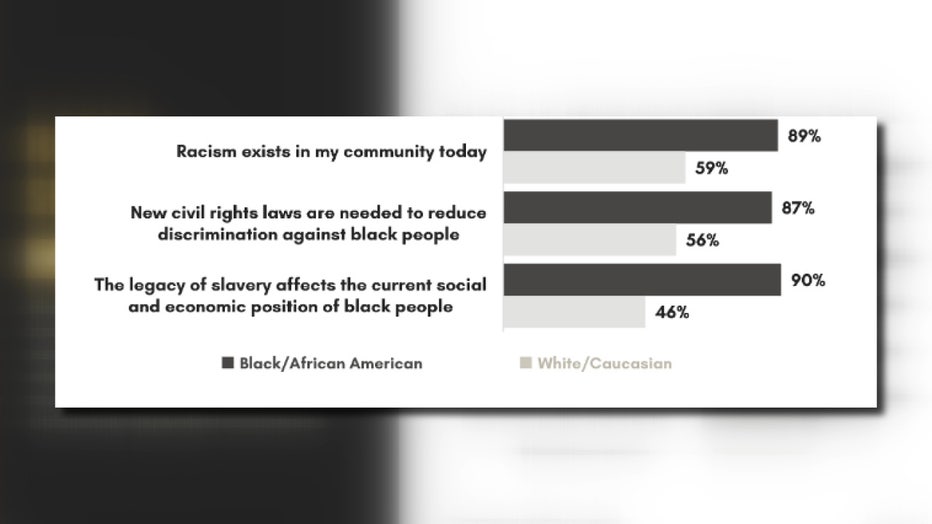 On police encounters that result in deaths of African Americans, 85 percent of blacks see them as signs of a broader problem, while 54 percent of whites do.

When they see an officer, 60 percent of blacks feel less safe, compared to 21 percent of whites. Only 7 percent of Blacks surveyed feel more safe.

Even Les Miller, the chair of the Hillsborough County Commission, is not immune from being treated as a potential suspect on the road.

"I just had it happen less than a year and a half ago," he said of unfairly getting pulled over by law enforcement. "My son is a police officer. He has to talk to his two sons about how to handle themselves if they are pulled over by the police."

If there's one antidote Miller would suggest, it's this: