Home prices across the United States have jumped another 19 percent, which is good news for sellers, but may be pricing some buyers out of the market.

TAMPA, Fla. - The Tampa and Miami areas continued in February to have among the nation’s largest increases in home prices when compared to a year earlier, according to a report released Tuesday.

The Tampa area saw a 32.6 percent year-over-year gain in home prices, barely trailing the Phoenix area for the largest jump in the country. Phoenix was at 32.9 percent, according to the S&P CoreLogic Case-Shiller U.S. National Home Price NSA Index. The Miami area was third-highest at 29.7 percent. The three markets also have topped the nation in price increases in other recent months.

The year-over-year gain in February for 20 metropolitan markets in the index was 19.8 percent.

RELATED: Tampa among top U.S. cities where most people are moving

The Tampa and Miami areas were the only regions of Florida included in the index.

Craig J. Lazzara, managing director at S&P DJI, said in a prepared statement that the 19.8 percent increase and other measurements "reflect an acceleration of price growth relative to January’s level."

But he also indicated the surge in prices might slow.

"The macroeconomic environment is evolving rapidly and may not support extraordinary home price growth for much longer," he said. "The post-COVID resumption of general economic activity has stoked inflation, and the Federal Reserve has begun to increase interest rates in response. We may soon begin to see the impact of increasing mortgage rates on home prices." 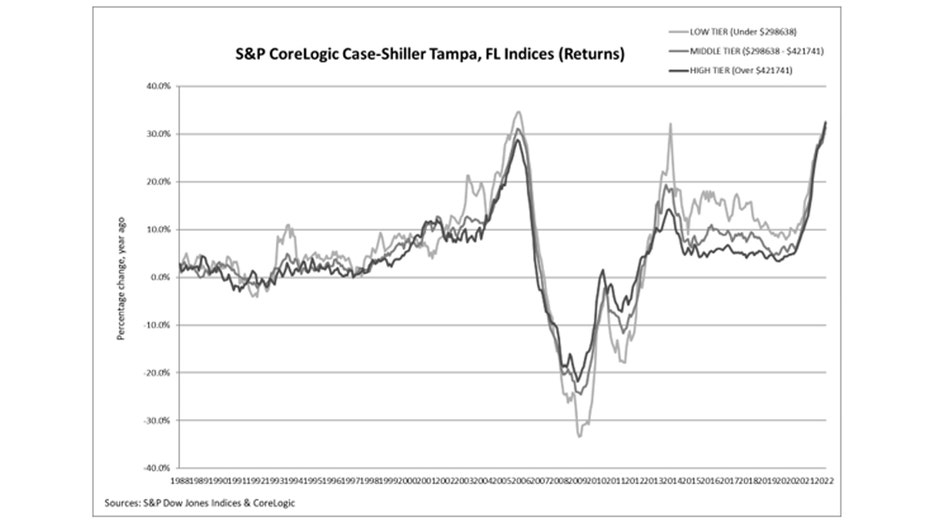 Here are the year-over-year increases for 20 metropolitan areas: