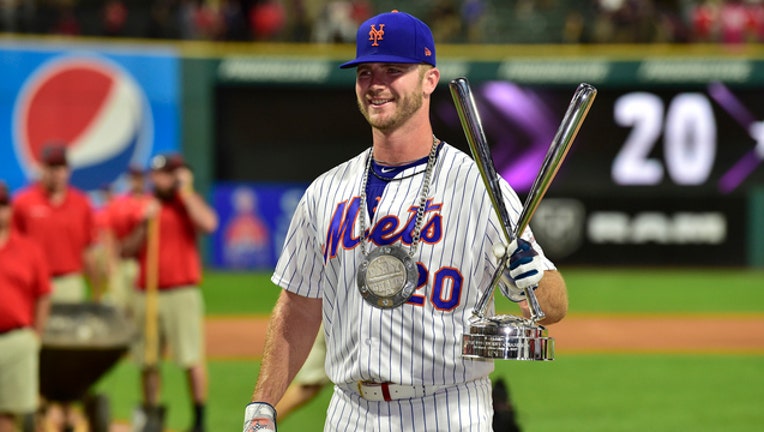 "We were watching in disbelief," said his mother, Michelle Alonso. "And then, when it happened, elation."

She did an interview with FOX 13 News from her hotel in Cleveland, as she prepared to watch her son compete in Tuesday's All Star Game.

"I don't think I was breathing," she said. "I think my body was convulsing."

Instead of a Major League batting practice thrower, he chose his own cousin, Derek Morgan, to pitch.

As usual for him, his biggest moments with family. It was that way when he first stepped onto a field in 1998 when he was about to start Little League in South Tampa.

"Ya'll see a 24-year-old Big Leaguer, I see that Little Leaguer who loves to play ball and run around the mud and want to do it again."

Winning the Home Run Derby brought a prize of $1 million.

But it's not all for him. He is dividing ten percent between the "Wounded Warrior Project" and "Tunnel to Towers," charities for first responders and the military.

"That is so him, that is not a surprise," said Michelle Alonso. "He is a giver. He is somebody who lives his life, his heart is full of gratitude."

He is on every youngster's Field of Dreams, and indeed, the star of the show.

"He believed that he could (do it) so it just brings the rest of us along with him," said Michelle Alonso. "We are going to win this altogether or have a great time trying."