WASHINGTON (AP) - Florida business owner Robert Palmer cheered on the violence at the U.S. Capitol on Jan. 6 before he joined the fray. Screaming obscenities, he hurled a wooden plank and a fire extinguisher at police officers trying to ward off the mob.

Nearly a year later, Palmer fought back tears when he faced the federal judge who sentenced him to more than five years in prison. He said he was "horrified, absolutely devastated" by what he had done.

"I'm just so ashamed that I was a part of that," Palmer told U.S. District Judge Tanya Chutkan on Dec. 17 before she gave him the longest prison term for any rioter so far.

Judges are hearing tearful expressions of remorse — and a litany of excuses — from rioters paying a price for joining the Jan. 6 insurrection, even as others try to play down the deadly attack on a seat of American democracy.

The Justice Department's investigation of the riot has now entered the punishment phase. So far, 71 people have been sentenced for riot-related crimes. They include a company CEO, an architect, a retired Air Force lieutenant colonel, a gym owner, a former Houston police officer and a University of Kentucky student. Many rioters have said they lost jobs and friends after their mob of Donald Trump loyalists disrupted the certification of Joe Biden’s presidential victory.

Fifty-six of the 71 pleaded guilty to a misdemeanor count of parading, demonstrating or picketing in a Capitol building. Most of them were sentenced to home confinement or jail terms measured in weeks or months, according to an Associated Press tally of every sentencing. But rioters who assaulted police officers have gotten years behind bars.

With hundreds of people charged, the Justice Department has taken heat for not coming down harder on some rioters, and it has failed to charge anyone with sedition or treason despite hints early on in the investigation. But lower-level cases tend to be easier to prosecute and typically get resolved before more complex ones.

At least 165 people have pleaded guilty so far, mostly to crimes punishable by a maximum sentence of six months. There are dozens of cases involving more serious offenses still moving through the system. More than 220 people have been charged with assaulting or impeding law enforcement officers at the Capitol, according to the Justice Department. Since November, three of them have been sentenced to prison terms ranging from more than three years to just over five years.

The District of Columbia federal court is overloaded with Jan. 6 cases. More than 700 people have been charged so far and the FBI is still looking for more. Among the most serious charges are against far-right extremist group members accused of plotting attacks to obstruct Congress from certifying the 2020 presidential election. Their cases haven’t yet gone to trial.

The rioters' refrains before the judges are often the same: They were caught up in the moment or just following the crowd into the Capitol. They didn’t see any violence or vandalism. They thought police were letting them enter the building. They insist they went there to peacefully protest. 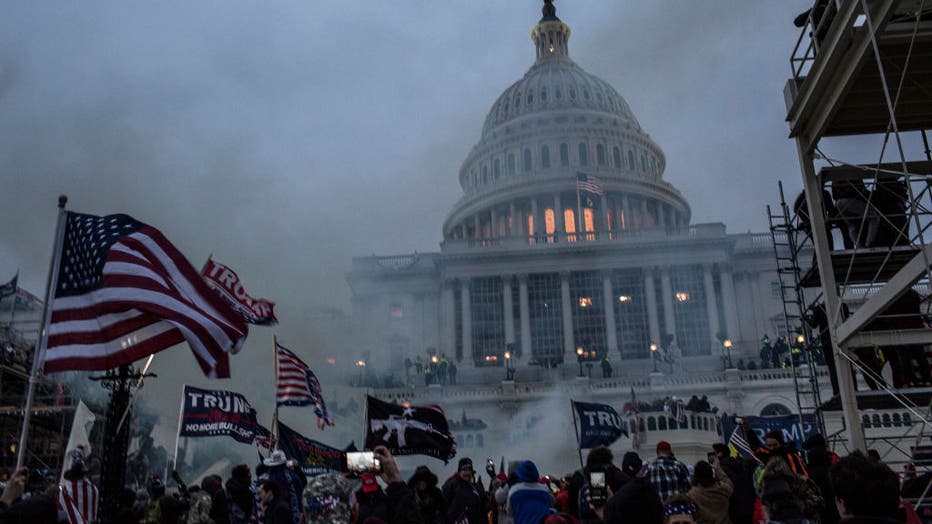 Security forces respond with tear gas after the US President Donald Trump's supporters breached the US Capitol security. (Photo by Probal Rashid/LightRocket via Getty Images)

Their excuses often implode in the face of overwhelming evidence. Thousands of hours of videos from surveillance cameras, mobile phones and police body cameras captured them reveling in the mayhem. Many boasted about their crimes on social media in the days after the deadly attack.

Judge Amy Berman Jackson said then-President Trump’s incendiary speech on Jan. 6 "stoked the flames of fear and discontent." But she told Russell James Peterson, a rioter from Pennsylvania, that he "walked there on his own two feet" and must bear responsibility for his own actions.

"No one was swept away to the Capitol. No one was carried. The rioters were adults," Jackson said before sentencing Peterson to 30 days' imprisonment.

A seemingly genuine display of contrition before or during a sentencing hearing can help a rioter avoid a jail cell. The judges often cite remorse as a key factor in deciding sentences.

But Chutkan told Palmer that she couldn’t tell if his remorse was genuine.

"I can’t look into your heart or your mind," the judge said. "The way you conduct your life after this case is going to speak volumes about whether you are truly remorseful."

Anna Morgan-Lloyd, the first rioter to be sentenced, told Senior Judge Royce Lamberth in June that she was ashamed of the "savage display of violence" at the Capitol. A day later, however, the Indiana woman told Fox News host Laura Ingraham that people were "very polite" during the riot, that she saw "relaxed" police officers chatting with rioters and that she didn’t believe the Jan. 6 attack was an insurrection.

Her inconsistency didn’t escape Lamberth's notice. In a footnote to an order in another case, the judge said his "hopes have been recently dashed" when Morgan-Lloyd’s Fox interview "directly conflicted with the contrite statements that she made" to him.

Jacob Chansley, the so-called "QAnon Shaman" was sentenced to 41 months in prison for his role in the Jan. 6 riot at the U.S. Capitol. Federal Judge Royce Lamberth told Chansley during a sentencing hearing on Wednesday that he believed the 34-year-old was now "on the right track," but that the crime was so serious it warranted the sentence. Chansley gave a lengthy speech during the hearing, saying he was "wrong for entering the Capitol," and admitting he had no excuse. LiveNOW from FOX's Daytona Everett spoke with Fox 10 Phoenix's Irene Snyder about the sentencing. Snyder also spoke with Chansley's mother, Martha, for reaction.

Dona Sue Bissey ’s case is one of only six in which prosecutors agreed to recommend probation without home detention. But instead, Chutkan sentenced her to 14 days in jail. The judge questioned whether Bissey, 53, of Indiana, truly was remorseful because she bragged about her participation in the riot.

"There must be consequences for taking part, even a small part, in a mass attempt to stop the certification of the presidential election and prevent the transfer of power," said Chutkan, who was nominated by President Barack Obama.

All eight of the Jan. 6 defendants sentenced by Chutkan have received jail or prison terms. In all but one of those cases, the sentence that she handed down was stricter than prosecutors' recommendation.

She said it was "almost schizophrenic in some ways" for prosecutors to recommend a three-month jail sentence for a Tennessee man, Jack Jesse Griffith, in a court filing that referred to rioters as "those who trespassed."

"No wonder parts of the public in the United States are confused about whether what happened on January 6th at the Capitol was simply a petty offense of trespassing with some disorderliness or shocking criminal conduct that represented a grave threat to our democratic norms," Howell said during Griffith's Oct. 28 sentencing, according to a transcript.

The judge who sentenced Boyd Camper to 60 days' imprisonment for a misdemeanor offense said the Montana man’s presence in the mob "helped create the momentum for violence" and provided safety for violent rioters even though he personally didn’t attack law enforcement officers.

Some judges have rejected prosecutors’ recommendations for prison sentences. Judge Trevor McFadden, a Trump nominee, said it is "almost unheard of" for first-time offenders to get jail time for nonviolent misdemeanors. Howell questioned why a short jail term for riot defendant Glen Wes Lee Croy, without a longer term of court supervision, would be the best way to ensure that the Colorado man "stays on a law-abiding path."

Many other prominent cases remain unresolved. Dozens of people linked to extremist groups have been charged with conspiring to carry out coordinated attacks on the Capitol, including more than 20 defendants tied to the anti-government Oath Keepers and at least 16 connected to the far-right Proud Boys.

At least five people associated with the Oath Keepers have pleaded guilty. At least one Proud Boys member has pleaded guilty and agreed to cooperate with prosecutors. None of them has been sentenced yet.

Approximately 20 trials are scheduled in 2022. Meanwhile, judges are plowing through daily dockets of guilty pleas and sentencings.

Anthony Mariotto, a Florida man who was sentenced to three years of probation and ordered to pay a $5,000 fine, said he "got caught up in the moment" but knows he broke the law by entering the Capitol.

"I was hoping that they would just pause the election," Mariotto said during his December sentencing. "I wish Joe Biden, President Biden, would have won by billions of votes. None of this would have happened."