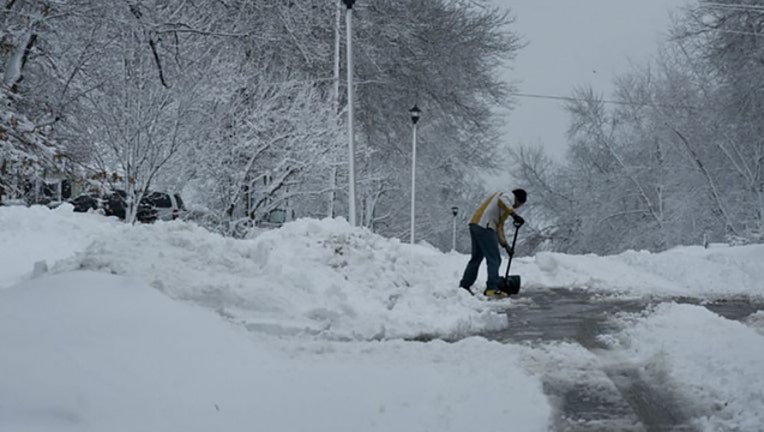 Winter storm warnings and watches stretched from Wyoming and Montana through western Nebraska and into the Dakotas and Minnesota. The storm was expected to blast the region with strong winds and dump at least 10 inches of snow in areas. Blizzardlike conditions could persist through Friday, forecasters said.

Blowing and drifting snow was making travel hazardous, with wind gusts approaching 40 mph in some areas.

The National Weather Service in Bismarck, North Dakota, said a "potentially historic October winter storm" was in the making.

North Dakota Agricultural Commissioner Doug Goehring said the snow on top of a wet autum was causing "a great deal of anxiety" for farmers and ranchers. He urged those in emotional distress to reach out for help.

People in some communities had to put aside their rakes for snow shovels.

"The ground is warm underneath, so soon as you scoop it the sidewalks are clear," said Drew Petersen, who owns a drugstore in Chadron, where more than 5 inches had fallen.

Petersen said his out-of-town employees made it to work, but they said the roads were snow-covered and slushy.

Forecasters predicted a foot (31 centimeters) of snow or more would fall in parts of the Dakotas through Friday and nearly that amount would fall in Nebraska.

In Fargo, North Dakota, the homecoming parade was cancelled a day ahead of time at North Dakota State University, where its top-ranked Football Championship Subdivision team was set to play Saturday inside the warm confines of the Fargodome. Police in North Dakota's capital city of Bismarck responded to at least 35 traffic crashes on Thursday.

Snow fell in Colorado's mountains through Thursday afternoon, which was a welcome sight for skiers and snowboarders waiting for resorts to open for the season. It turned into an ugly commute for drivers in Denver, where about 100 crashes were reported during rush hour and where police warned people on twitter to "keep your wits about you."

Temperatures that reached the upper 70s in Denver on Wednesday afternoon had plummeted into the 20s on Thursday. National Weather Service forecasters predicted 1 to 3 inches of snow in the Denver area Thursday and warned that freezing temperatures would persist along the Interstate 25 corridor and the Eastern Plains through Friday.

The storm had dropped 8 inches of snow on the west side of Rapid City, South Dakota, according to weather service forecasters, and up to 2 more inches were expected before the storm headed northeast.

Winter storms arriving just three weeks into fall aren't unusual, but they can blow into howling blizzards. Hintz recalled an October 2013 storm in which hundreds of cattle perished. Snow reached 55 inches deep in the South Dakota community of Lead.

The storm left 32,000 customers without power in Washington state Wednesday.