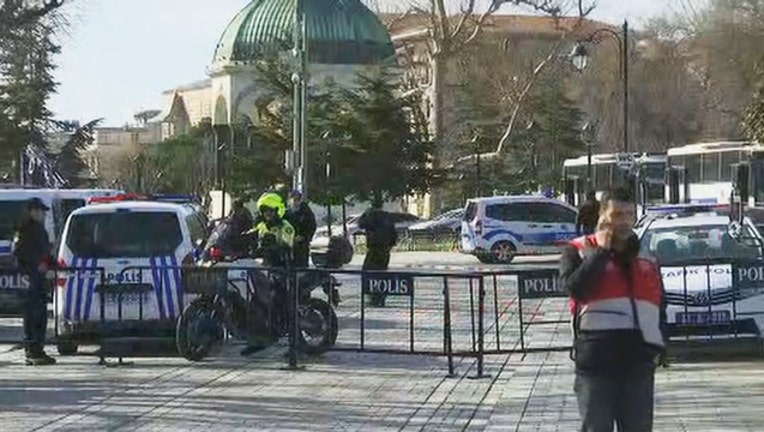 ISTANBUL (AP) — The latest on the explosion in historic center of Istanbul. All times local:

A senior Turkish government official says at least nine of the victims of Tuesday's suicide bombing in Istanbul's historic district are German nationals.

The official spoke on condition of anonymity because of Turkish rules that bar officials from speaking to journalists without authorization.

The official did not have information on the other victim. It is unclear whether the death toll includes the bomber.

German Foreign Minister Frank-Walter Steinmeier has told reporters in Berlin that he cannot rule out that Germans are among the dead in a suicide bombing in Istanbul. He said that the German government is in contact with Turkish authorities and condemned the attack as a "barbaric act of terrorism."

Chancellor Angela Merkel, speaking at a different news conference, said, "we are very concerned that German citizens could be and probably will be among the victims."

Denmark has joined Germany in warning its citizens to avoid crowds outside tourist attractions in Turkey.

The Danish Foreign Ministry updated its website following Tuesday's deadly explosion in a historic district of Istanbul that is popular with tourists, killing at least 10 people and wounding 15 others.

The travel advisory said Danes should "until further notice" avoid public places and other places where a lot of people are gathered.

Kurtulmus said most of the 10 people who died in the blast are foreigners. It was unclear whether the number included the alleged bomber.

Kurtulmus was speaking to reporters in Ankara following a high-level security meeting hastily called to discuss the attack. Kurtulmus and other ministers were traveling to Istanbul to oversee the investigation

The European Union says it stands with Turkey in the fight "against all forms of terrorism" after the explosion in the heart of Istanbul.

EU foreign policy chief Federica Mogherini said Tuesday that both sides "must step up our efforts to counter extremist violence" and noted that this had been set as a priority at a November EU-Turkey summit in Brussels.

The Istanbul governor's office said the explosion killed at least 10 people and injured 15 others. President Recep Tayyip Erdogan blamed it on a suicide bomber with links to Syria.

Turkish President Recep Tayyip Erdogan says a Syria-linked suicide bomber is believed to be behind a blast in Istanbul that killed 10 people, and wounded some 15 others.

Erdogan said in televised remarks on Tuesday that both Turks and foreigners are among the dead. He did not provide details.

Turkey's Dogan news agency says at least six Germans, one Norwegian and one Peruvian are among the injured in an explosion in an area of Istanbul popular with tourists.

A spokeswoman for the Norwegian Foreign Ministry in Oslo said the office is working with the embassy in Turkey to check media reports of Norwegian citizens among the wounded. Seoul's Foreign Ministry also told reporters via text message that one South Korean had a slight finger injury after the blast.

The Istanbul governor's office said the explosion killed at least 10 people and injured 15 others.

Germany has warned its citizens to avoid crowds outside tourist attractions in Istanbul.

The warning follows a deadly explosion Tuesday in a historic district of the Turkish city that is popular with tourists.

Germany's Foreign Ministry warned on its website that further violent clashes and "terrorist attacks" are expected across Turkey.

It also urged travelers to stay away from demonstrations and gatherings, particularly in large cities

The Istanbul governor's office says the explosion at the city's historic Sultanahmet district has killed least 10 people. A statement says 15 other people were injured in Tuesday's blast. The cause of the explosion is under investigation, but state-run TRT television says it was likely caused by a suicide bomber.

The private Dogan news agency says at least two people were hospitalized following an explosion in the historic center of Istanbul.

State-run TRT television says the blast was likely caused by a suicide bomber, but authorities have not commented on the cause.

Private NTV television said the explosion was close to a park that is home to a landmark obelisk. The state-run Anadolu Agency says several police and medics were sent to the area.