Warming climate is causing most baby turtles to be born female

A July report from the University of Exeter on the status of turtle nesting on the island of Boa Vista in the Republic of Cape Verde, where approximately one-sixth of the world’s loggerhead turtles nest, found that 84 percent of the turtle populations being born there are now female.

BOA VISTA, Cape Verde - Warming temperatures resulting from climate change are having a dramatic and potentially devastating effect on sea turtle populations — as temperatures rise, so does the temperature of the sandy beaches where turtles lay their eggs, and this means that an overwhelming majority of turtles are now born female.

A July report from the University of Exeter on the status of turtle nesting on the island of Boa Vista in the Republic of Cape Verde — where approximately one-sixth of the world’s loggerhead turtles nest — found that 84 percent of the turtle populations being born there are now female.

The report estimates that “in future climate change scenarios (by 2100), irrespective of beach, island or sand colour, sex ratios reach over 99 percent female, and 3 islands (Fogo, Sau Nicolau, Santiago) would cease to produce males, with greater than 90 percent of nests incubating at lethally high temperatures.”

The study further predicts that “under a low-emissions scenario, without phenological adaptation, there would only be an estimated 0.14 percent males produced across the whole population, while under mid- and high-emissions scenarios, male production may cease on most islands.”

It’s a trend that’s been appearing in turtle populations across the globe in recent years.

Researchers working on Raine Island, Australia — which is the biggest and most important green sea turtle nesting ground in the Pacific Ocean — published a report in January 2018 that provided startling data.

Because sand temperatures had increased so dramatically on the island, female hatchlings outnumbered males 116-to-1. 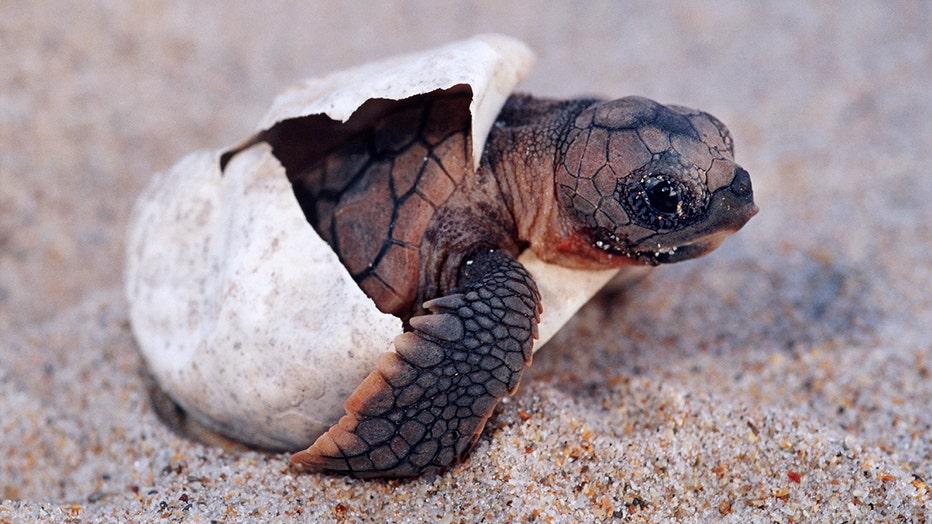 Loggerhead turtle, Caretta caretta, is endangered, in part due to new populations being born largely female as a result of climate change.

On the beaches of Playa Grande on Costa Rica’s Pacific coast, 70 to 90 percent of all turtles born are female, according to the Sea Turtle Conservancy.

The sex of baby turtles is determined by the temperature of the sand in which the eggs are laid, and the window of difference between the temperature that results in females babies versus male is relatively small.

A researcher named Adolfo Marco who has worked on Boa Vista told the Washington post that “males here could vanish in two or three decades. There will be no reproduction.”

Many conservation efforts have sprung up in important turtle nesting grounds around the world, and in places like Cape Verde where tourism is a huge part of the economy, education efforts are crucial.

But some efforts are far more interventionist at this critical juncture for sea turtles.

“At Junquillal Beach on the Pacific coast, where it is often too hot for eggs to hatch at all, scientists have begun moving eggs to nurseries – essentially holes dug to a certain depth on cooler areas of the beach,” the Sea Turtle Conservancy explains. “When the hatchlings emerge, rangers chaperone them from the nest to the water, protecting them against human and animal predators alike.”

Similar efforts are being carried out on Boa Vista.

The conservation group BIOS.CV has been leading large efforts in the study and conservation of marine turtles in Cape Verde for the past 14 years and has taken to creating and using egg nurseries for new populations on Boa Vista.