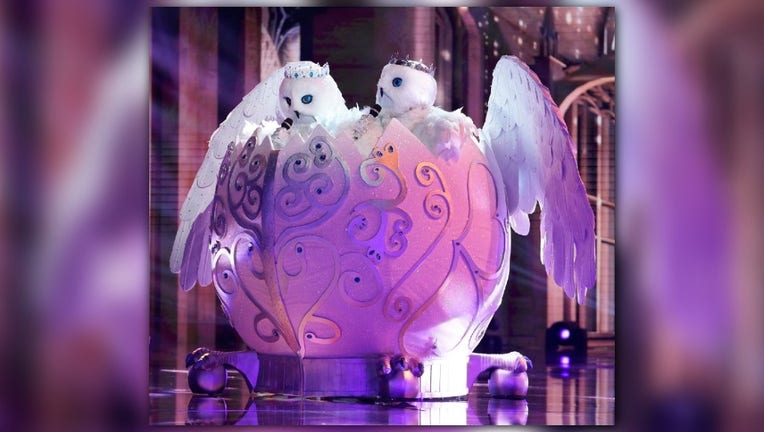 The Snow Owls in the The Group A Play Offs - Famous Masked Words episode of THE MASKED SINGER airing Wednesday, Oct. 7 (8:00-9:00 PM ET/PT) on FOX. (Photo by FOX via Getty Images)

LOS ANGELES - Guessing the identity of one costumed celebrity is usually a daunting enough task for the panel on “The Masked Singer,” but this week, they had to guess two.

Even so, Nicole Scherzinger was up to the task when she correctly guessed the Snow Owls were singers Clint Black and Lisa Hartman.

The couple competed in the Group A finals for a place in the Super 6. They took the stage with "The Prayer" by Andrea Bocelli and Celine Dion.

Even so, the panel dubbed The Sun’s rendition of Janis Joplin's "Piece of My Heart" as the best of the evening, relegating Snow Owls and Popcorn to an elimination round.

The duo tried to stave off elimination with more Celine Dion, this time opting for “Because You Love Me.” But Popcorn cemented her place in the Super 6 with Bryan Adams’ song “(Everything I Do) I Do It for You.”

Despite their elimination, Scherzinger told the couple she was glad they came on the show because they were “unbelievable.”

“Y’all need to release something,” Scherzinger joked. The decorated singers have collaborated on many songs over the last few decades.

While Scherzinger’s guesses were spot on, other panelists were not even close.

Niecy Nash thought it could be Harry Hamlin and Lisa Rinna.

The Group B finals air next Wednesday at 8 p.m. ET on FOX.

This station is owned by the Fox Corporation. This story was reported from Atlanta.