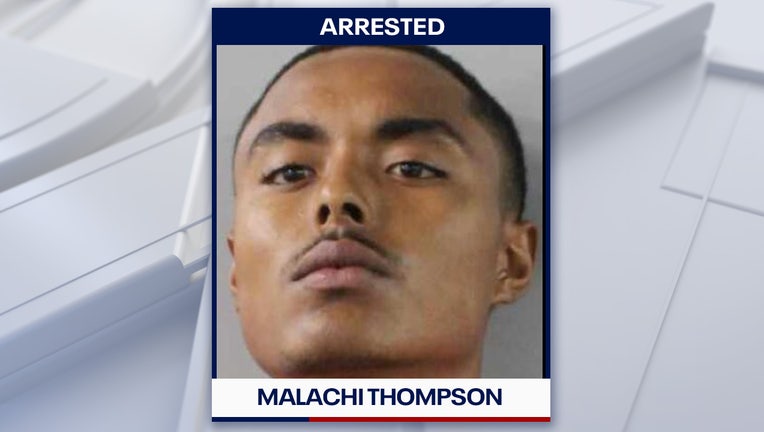 LAKELAND, Fla. - After a rash of car burglaries in Lakeland, Polk County detectives say they found their suspects: three brothers, ages 14, 15 and 18.

The 18-year-old was identified as Malachi Thompson of Bartow. The three brothers face a total of 304 charges. According to the sheriff's office, the trio burglarized multiple vehicles in unincorporated Lakeland. Three firearms and other items were stolen.

Deputies said they responded to the Highland City area early Friday morning after receiving reports of vehicle burglaries. The three suspects were found hiding in a large plant in a resident's backyard. K9 deputies and the sheriff's office aviation unit helped track them down.

Officials said the 15-year-old struggled with the responding deputies, broke free and tried to jump over a fence, but he was taken into custody. The other two suspects jumped over a fence and ran into another backyard, where deputies were able to apprehend them.

Detectives said the 14-year-old admitted that he and his brothers met in Wauchula to plan the burglaries. He said he chose to be the lookout "because he was already on probation for doing the same thing."

Thompson was also on probation at the time of the crime spree, detectives said. Thompson had a prior vehicle burglary charge while the 14-year-old was on probation for grand theft. Officials described them as "prolific juvenile offenders."

"These two out-of-control juveniles are another prime example of the Department of Juvenile Justice not holding serious juvenile criminals accountable, resulting in more crime and more victims," Sheriff Grady Judd said in a statement. "When juveniles are not held appropriately accountable by DJJ, the juveniles believe they can continue to do what they like—their criminal conduct escalates in both number and severity. This makes our communities, citizens, and businesses less safe."

"We need the community's help. Lock your stuff up, take your guns in the house at night," Judd said. "After all, if the gun's in the car and somebody breaks into your house, it's not doing you any good in the car. You can't protect yourself in the house with your gun in the car."

In a news release, the Polk County Sheriff's Office released details on the brothers' criminal histories.

The 14-year-old's criminal history includes 13 previous charges for seven vehicle burglaries and six thefts in Hardee County in 2020. Those were merged into a single count of grand theft, officials said. He was sentenced to probation but back in August of this year, officials said he was listed as an absconder and a juvenile pick-up order was issued for his arrest.

"Why isn’t this prolific juvenile being taken seriously by DJJ? Who is keeping tabs on him?" Grady questioned in his statement. "What kind of ‘community-based care’ or program is he involved with? Is this care provider or program being held accountable?"

The 15-year-old's criminal history includes a charge of larceny grand theft. Officials said he completed a court-ordered diversion program. He was also charged with failure to appear in court and was reported as a missing runaway in August.