The problems for Ford and General Motors continue to pile as access to the Ambassador Bridge in Michigan has forced both companies to shutter plants while managing the fallout of a protest over vaccine mandates at the US-Canada border.

DETROIT - The truck blockade by Canadians protesting the country’s COVID-19 restrictions is tightening the screws on the auto industry, forcing Ford, Toyota and General Motors to shut down plants or otherwise curtail production on both sides of the U.S.-Canada border.

The bumper-to-bumper demonstration entered its fourth day Thursday at the Ambassador Bridge connecting Windsor, Ontario, to Detroit, disrupting the flow of auto parts and other products back and forth across the border.

The bridge is the busiest U.S.-Canadian border crossing, carrying 25% of all trade between the two countries.

RELATED: 'I understand why, but it makes it harder on us': Canadian trucker talks lost time, money

Ford said its Windsor, Ontario, engine plant reopened Thursday after being shut down on Wednesday because of a lack of parts. But the factory and the company’s assembly plant in Oakville, Ontario, near Toronto, are operating at reduced capacity, the automaker said.

"This interruption on the Detroit-Windsor bridge hurts customers, auto workers, suppliers, communities and companies on both sides of the border," Ford said in a statement. "We hope this situation is resolved quickly because it could have widespread impact on all automakers in the U.S. and Canada."

On the U.S. side, GM canceled the second shift on Wednesday and the first shift Thursday at its midsize SUV factory outside Lansing, Michigan.

Toyota said it will not be able to manufacture anything at three Canadian plants for the rest of this week because of parts shortages. In a statement, the automaker blamed supply chain disruptions, weather and pandemic-related problems, but the shutdowns came just days after the blockade began Monday. 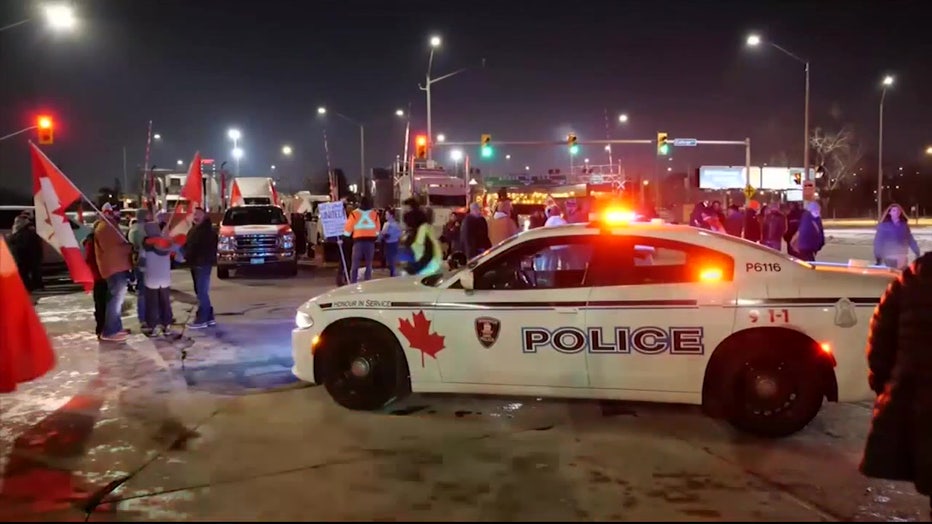 Stellantis, formerly Fiat Chrysler, said all of its North American factories were running Thursday, but shortages because of the blockade forced it to shorten shifts at several plants.

Hundreds of demonstrators in trucks have also paralyzed the streets of downtown Ottawa for almost two weeks, and dozens more have been blocking the border crossing at Coutts, Alberta, railing against COVID-19 restrictions and Prime Minister Justin Trudeau.

The Freedom Truck Convoy has been promoted and cheered on by many Fox News personalities and attracted support from the likes of former President Donald Trump and Texas Sen. Ted Cruz.

Windsor Mayor Drew Dilkens said Wednesday that police had not removed protesters there for fear of inflaming the situation. But he added: "We’re not going to let this happen for a prolonged period of time."

RELATED: GoFundMe for Canada’s ‘Freedom Convoy’ cut off, refunds to be issued

As of Wednesday, the demonstration involved 50 to 74 vehicles and about 100 protesters, police said.

To avoid the blockade and get into Canada, truckers in the Detroit area have had to drive 70 miles north to Port Huron, Michigan, and cross the Blue Water Bridge, where there was a 4½-hour delay leaving the U.S.

While protesters have been calling for Trudeau’s removal, most of the restrictive measures around the country have been put in place by provincial governments. Those include requirements that people show proof-of-vaccination "passports" to enter restaurants, gyms, movie theaters and sporting events.

Many provinces announced plans this week to remove or relax those restrictions after the surge in omicron cases crested in the country.

Pandemic restrictions have been far stricter in Canada than in the U.S., but Canadians have largely supported them. Canada’s COVID-19 death rate is one-third that of the U.S.