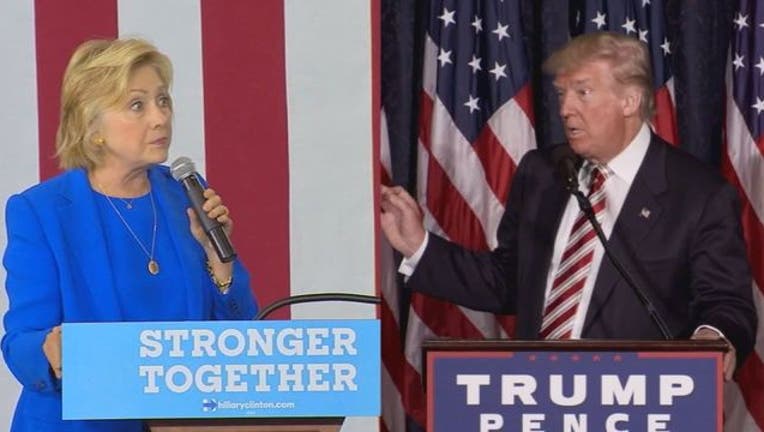 TALLAHASSEE (NSF) - Get ready, Florida voters. You're about to see even more of Donald Trump and Hillary Clinton.

After Monday night's ballyhooed presidential debate, Trump and Clinton will quickly try to grab momentum in Florida. The Clinton campaign didn't wait for the debate to start, dispatching vice-presidential candidate Tim Kaine to the critical state ahead of time to try to lock down votes.

Trump is scheduled to jet into Florida on Tuesday for a 7 p.m. appearance at Melbourne International Airport. Trump probably doesn't have to worry much about winning Melbourne and surrounding Brevard County, solidly Republican territory where GOP voters outnumber registered Democrats by about 40,000.

But Trump and Clinton both need party loyalists to turn out in the Nov. 8 election.

That likely explains Clinton's plan to campaign Friday in Broward County, the place where Democrat candidates always go to try to amass votes. Broward was also friendly territory for Clinton during her fierce presidential primary against Vermont Sen. Bernie Sanders, with Clinton scooping up about 72 percent of the vote in the county.

Also during her campaign swing Friday, Clinton is scheduled to go a little ways up Interstate 95 to St. Lucie County. While St. Lucie is a mid-sized county, registered Democrats outnumber Republicans, and the county went heavily for Clinton in the presidential primary.

While Clinton works Southeast Florida, her husband, former President Bill Clinton, will campaign Friday and Saturday across the top of the state. While full details had not been released Monday morning, Bill Clinton is expected to make stops in Panama City, Tallahassee and Jacksonville.

Tallahassee, home to a large number of government workers and two state universities, is a Democratic stronghold. Also, while Jacksonville typically goes for Republicans in statewide races, it has a large number of African-American voters --- a group that Hillary Clinton is looking to turn out.

Meanwhile, Kaine, a Virginia senator, tried to rally support for Clinton in advance of the debate. He appeared Sunday in Miami and was scheduled to campaign Monday in Lakeland and Orlando, including attending a debate-watching party at Church Street Station in downtown Orlando. He also is expected to make an appearance at 9:15 a.m. Tuesday in Orlando.

Florida's 29 electoral votes are among the biggest prizes in the presidential election, making up more than 10 percent of the 270 electoral votes needed for victory. Recent polls have showed Trump and Clinton in a virtual dead heat in the state, with a Suffolk University poll last week giving Trump a one-point edge --- a statistical tie.