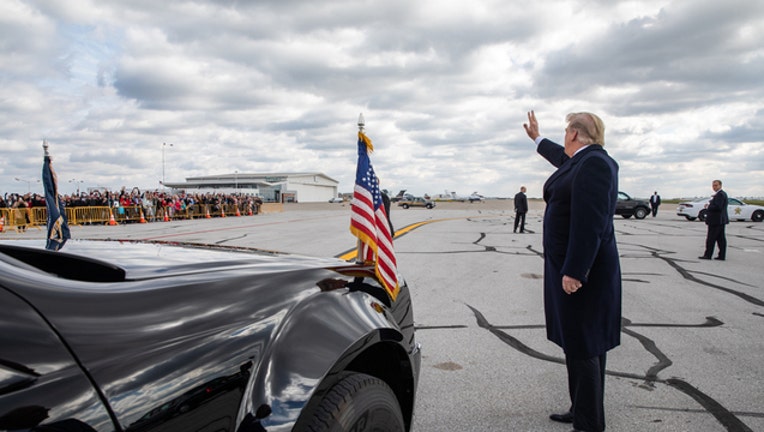 WASHINGTON (AP) — Thousands of U.S. troops to stop an "invasion" of migrants. Tent cities for asylum seekers. An end for the Constitution's guarantee of birthright citizenship.

With his eyes squarely on next Tuesday's elections, President Donald Trump is rushing out hardline immigration declarations, promises and actions as he tries to mobilize supporters to retain Republican control of Congress. His own campaign in 2016 concentrated on border fears, and that's his final-week focus in the midterm fight.

"This has nothing to do with elections," the president insists. But his timing is striking.

Trump says he will send more than 5,000 military troops to the Mexican border to help defend against caravans of Central American migrants who are on foot hundreds of miles away. Tent cities would not resolve the massive U.S. backlog of asylum seekers. And most legal scholars say it would take a new constitutional amendment to alter the current one granting citizenship to anyone born in America.

Still, Trump plunges ahead with daily alarms and proclamations about immigration in tweets, interviews and policy announcements in the days leading up to elections that Democrats hope will give them at least partial control of Congress.

Trump and many top aides have long seen the immigration issue as the most effective rallying cry for his base of supporters. The president had been expected to make an announcement about new actions at the border on Tuesday, but that was scrapped so he could travel instead to Pittsburgh, where 11 people were massacred in a synagogue on Saturday.

Between the shootings, the deadliest attack on Jews in U.S. history, and the mail bomb scare targeting Democrats and a media organization, the caravan of migrants slowly trudging north had faded from front pages and cable TV.

But with well-timed interviews on Fox and "Axios on HBO," Trump revived some of his hardest-line immigration ideas:

— An executive order to revoke the right to citizenship for babies born to non-U.S. citizens on American soil.

— And the prolonged detention of anyone coming across the U.S.-Mexico border, including those seeking asylum, in "tent cities" erected "all over the place."

The administration on Monday also announced plans to deploy 5,200 active duty troops — double the 2,000 who are in Syria fighting the Islamic State group — to the border to help stave off the caravans.

The main caravan, still in southern Mexico, was continuing to melt away — from the original 7,000 to about 4,000 — as a smaller group apparently hoped to join it.

Trump insists his immigration moves have nothing to do with politics, even as he rails against the caravans at campaign rallies.

Trump's citizenship proposal would inevitably spark a long-shot legal battle over whether the president can alter the long-accepted understanding that the 14th Amendment grants citizenship to any child born on U.S. soil, regardless of his parents' immigration status.

Omar Jadwat, director of the Immigrants' Rights Project at the American Civil Liberties Union in New York, said the Constitution is very clear.

"If you are born in the United States, you're a citizen," he said. He called it "outrageous that the president can think he can override constitutional guarantees by issuing an executive order,

James Ho, a conservative Trump-appointed federal appeals court judge, wrote in 2006, before his appointment, that birthright citizenship "is protected no less for children of undocumented persons than for descendants of Mayflower passengers."

Even House Speaker Paul Ryan, typically a supporter of Trump proposals, said on WVLK radio in Kentucky: "Well you obviously cannot do that. You cannot end birthright citizenship with an executive order."

But Trump says he's been assured by his lawyers that the change could be made with "just with an executive order" — an argument he has been making since his early days as a candidate, when he dubbed birthright citizenship a "magnet for illegal immigration" and pledged to end it.

"We're the only country in the world where a person comes in and has a baby, and the baby is essentially a citizen of the United States," he said in an Axios interview excerpt released Tuesday.

Not so, according to a 2010 study from the Center for Immigration Studies, a group that supports immigration restrictions, that said at least 30 countries offered birthright citizenship.

Vice President Mike Pence said the administration was "looking at action that would reconsider birthright citizenship."

The non-partisan Migration Policy Institute estimates that there are more than 4 million U.S.-born children under the age of 18 who have an unauthorized immigrant parent.

A person familiar with the internal White House debate said the topic of birthright citizenship has come up inside the West Wing at various times — and not without some detractors. However, White House lawyers expect to work with the Justice Department to develop a legal justification for the action. The person was not authorized to discuss the policy debate so spoke on condition of anonymity.

In Trump's Monday interview with Fox, he said the U.S. also plans to build tent cities to house migrants seeking asylum, who would be detained until their cases were completed. Right now, some asylum seekers, particularly families, are being released as their cases progress because there isn't enough detention space to house them.

The country is facing a massive backlog of immigration cases — some 700,000 — and there are more and more families coming across the border from Central America — groups who cannot be simply returned over the border. But experts question the legality and practicality of what would amount to indefinite detention.

The options are just two of many possibilities currently under discussion, including asylum law changes and simply barring members of the migrant caravans from entering the country using the same mechanism as the president's much-publicized travel ban for people from certain Muslim countries.

Administration officials say decisions are unlikely until after the midterm elections, in part because of the synagogue shooting and pipe-bomb scare.

But some supporters in Congress are rushing to cheer Trump on.

GOP Rep. Steve King of Iowa, who has introduced legislation to end birthright citizenship, said Trump was deftly seizing on an issue that was sure to help in the midterms.

"That ability to move on instinct without hesitation, that's why he's president," King said.