WASHINGTON - With the U.S. unemployment rate expected to his 20 percent soon, a number not seen since the great depression, millions of Americans received relief checks early in April in a bid to replace lost income due to the coronavirus closures. Unfortunately, many of the relief recipients are no longer living.

As lawmakers, as well as President Donald Trump, called on the IRS to deliver money to Americans as quickly as possible, many received a direct deposit into their accounts in April, but some may receive physical checks as late as September.

But in the rush to send desperately needed funds to those financially bereft after losing work because of social distancing orders, reports of deceased people receiving errant payments began to surface.

The Los Angeles Times reported that Mary Nakamura, a Hawaii resident who had been dead for more than a year received a stimulus check of $1,200 when her son noticed the payment made to her account on April 15.

RELATED: People behind in child support payments may not qualify for coronavirus stimulus check

While the IRS attempted to distribute money from the historic $2 trillion CARES Act passed in late March by accounting for an individual’s adjusted gross income from the 2019 year’s tax return, Nina Olson, former head of the Taxpayer Advocate Service, an internal IRS watchdog, told the Los Angeles Times that exceptions were not able to be made for the deceased.

“The IRS is following the law,” Olson told the Los Angeles Times. “The law tells the IRS to look at what the taxpayer reported on their 2019 return. ‘Look at their income and their filing status. If they are eligible based on that, make the payment.’ It doesn’t say, ‘Don’t make the payment to dead people.’”

If the IRS does not have a person’s 2019 tax return, the agency then bases income off of the 2018 return. Someone may have filed in 2018 but passed away shortly after and the government wouldn’t necessarily know.

While there is no confirmed number for how many deceased individuals received checks, dozens have reported family members who have passed away receiving stimulus money.

Rep. Thomas Massie of Kentucky tweeted a screenshot which appeared to show a text message from a personal friend who said their father, who died in 2018, received a check for $1,200.

Many other people took to social media to share a similar experience.

One person wrote asking for advice on what to do with the money they received for their deceased uncle.

In a White House Coronavirus Task Force briefing earlier this month, Trump acknowledged the issue, saying, “Sometimes people are listed, they die and they get a check. That can happen.”

“We’ll get that back,” the president added. 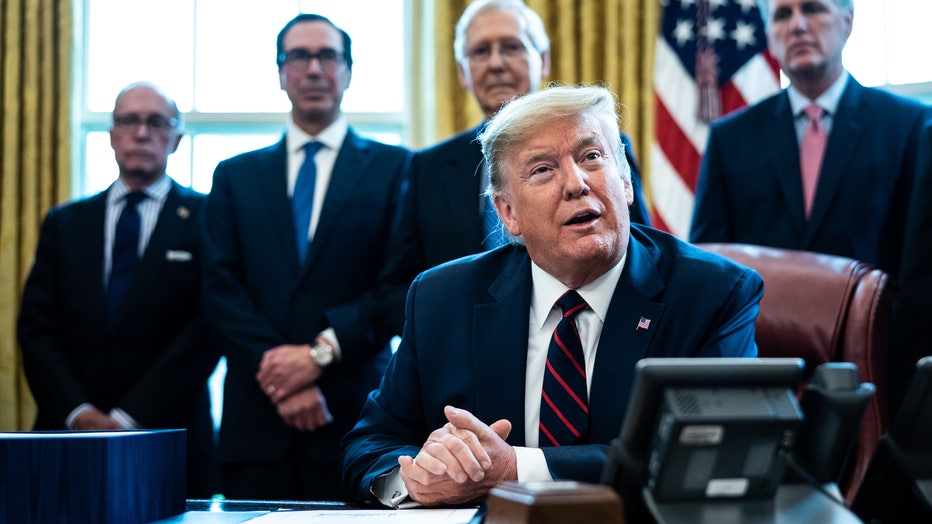 FILE - U.S. President Donald Trump speaks during a bill signing ceremony for H.R. 748, the CARES Act in the Oval Office of the White House on March 27, 2020 in Washington, DC. (Photo by Erin Schaff-Pool/Getty Images)

In an interview with the Wall Street Journal, Treasury Secretary Steven Mnuchin said that the money should be returned to the IRS.

“You’re not supposed to keep that payment,” Mnuchin said. “We’re checking the databases, but there could be a scenario where we missed something, and yes, the heirs should be returning that money.”

But Olson argued that beneficiaries of the deceased are not legally required to return the funds, adding that relatives of deceased recipients of stimulus money in 2010 kept the money.

Mistaken government payments to the dead are not a new occurrence. Nearly 72,000 deceased Social Security recipients received $250 stimulus checks during a previous hasty relief package in 2010 following the 2008 financial crisis, according to an inspector general report.