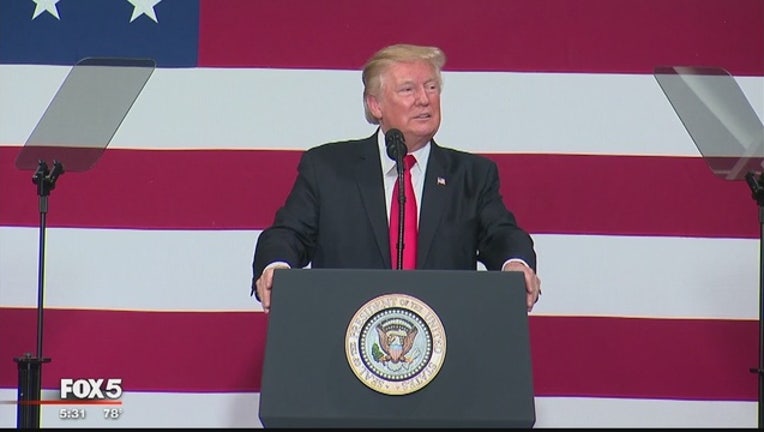 WASHINGTON (AP) - President Donald Trump will promote his plan for a sweeping rewrite of the tax code to an audience eager for the proposed change.

Trump is set to address the National Association of Manufacturers on Friday in Washington. A senior administration official says Trump will promote the tax plan as one that will help make American businesses more competitive. The official insists on anonymity to discuss the speech ahead of time.

The president and congressional Republicans this week released the outlines of a nearly $6 trillion tax cut plan that would deeply reduce taxes for corporations, simplify tax brackets and nearly double the standard deduction used by most tax filers. Many details remain to be fleshed out.

In the remarks, Trump is expected to highlight a provision that would allow businesses for the next five years to write off the full cost of new equipment in the year it's purchased.

Under the broader proposal, corporations would see their top tax rate cut from 35 percent to 20 percent. Seven personal tax brackets would be reduced to three: 12 percent, 25 percent and 35 percent. But the information released didn't include the income levels applied to the rates, making it difficult to know how a typical family's tax bill may be affected.

The plan also recommends a surcharge for the very wealthy. The standard deduction would nearly double to $12,000 for individuals and $24,000 for families, basically increasing the amount of personal income that would not be taxed. Deductions for mortgage interest and charitable giving would remain, but the plan seeks to end most other itemized deductions.

In the address, Trump will also review policy changes since he took office in January that are intended to improve the business climate, the official said. Those changes include lifting restrictions on energy production, reversing environmental rules and rolling back regulations. He'll also review economic gains of the past eight months.

Jay Timmons, president and CEO of the association, said Trump has been a "tireless advocate" for manufacturers. Timmons said U.S. manufacturers "have never been as enthusiastic or as optimistic about their future as they are this year, and that is because of the huge opportunity we have to get tax reform done."

Trump wants to sign tax legislation into law by the end of the year.