BUCHA, Ukraine - Ukrainian President Volodymyr Zelenskyy accused the Russians of gruesome atrocities in Ukraine and told the U.N. Security Council on Tuesday that those responsible should immediately be brought up on war crimes charges in front of a tribunal like the one established at Nuremberg after World War II.

Over the past few days, grisly images of what appeared to be intentional killings of civilians carried out by Russian forces in Bucha and other towns before they withdrew from the outskirts of Kyiv have caused a global outcry and led Western nations to expel scores of Moscow’s diplomats and propose further sanctions, including a ban on coal imports from Russia.

Zelenskyy, speaking via video from Ukraine to U.N. diplomats, said that civilians had been tortured, shot in the back of the head, thrown down wells, blown up with grenades in their apartments and crushed to death by tanks while in cars.

"They cut off limbs, cut their throats. Women were raped and killed in front of their children," he said. He asserted that people's tongues were pulled out "only because their aggressor did not hear what they wanted to hear from them."

Zelenskyy said that both those who carried out the killings and those who gave the orders "must be brought to justice immediately for war crimes" in front of a tribunal similar to what was used in postwar Germany.

Moscow's U.N. ambassador, Vassily Nebenzia, said that while Bucha was under Russian control, "not a single local person has suffered from any violent action." Reiterating what the Kremlin has contended for days, he said that video footage of bodies in the streets was "a crude forgery" staged by the Ukrainians.

"You only saw what they showed you," he said. "The only ones who would fall for this are Western dilettantes." 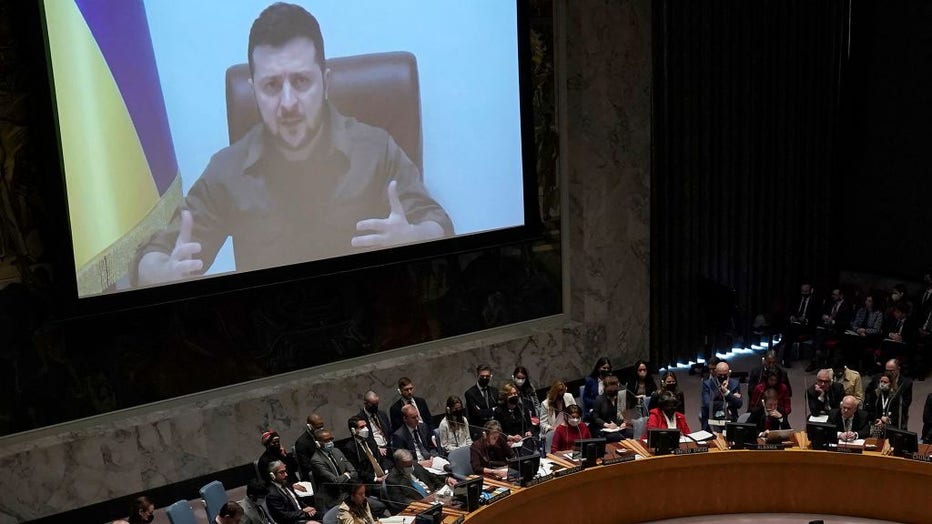 President Volodymyr Zelenskyy, of Ukraine, addresses a meeting of the United Nations Security Council in New York City on April 5, 2022. (Photo by TIMOTHY A. CLARY/AFP via Getty Images)

As Zelenskyy spoke to the diplomats, survivors of the monthlong Russian occupation took investigators to body after body of townspeople allegedly shot down by troops. Others simply surveyed the destruction.

In Borodyanka, northwest of Kyiv, 25-year-old, Dmitriy Yevtushkov searched the rubble of apartment buildings and found that only a photo album remained from his family’s home. In the besieged southern city of Mykolaiv, a passerby stopped briefly to look at the bright blossoms of a shattered flower stand lying among bloodstains, the legacy of a Russian shell that killed nine. The onlooker sketched out the sign of the cross in the air, and moved on.

Associated Press journalists in Bucha have counted dozens of corpses in civilian clothes and interviewed Ukrainians who told of witnessing atrocities. Also, high-resolution satellite imagery from Maxar Technologies showed that many of the bodies had been lying in the open for weeks, during the time that Russian forces were in the town.

The dead in Bucha included a pile of six charred bodies, as witnessed by AP journalists. It was not clear who they were or under what circumstances they died. One body was probably that of a child, said Andrii Nebytov, head of police in the Kyiv region. A gunshot wound to the head was visible on one.

The chief prosecutor for the International Criminal Court at The Hague opened an investigation a month ago into possible war crimes in Ukraine.

Zelenskyy stressed that Bucha was only one place and that there are more with similar horrors — a warning echoed by NATO Secretary-General Jens Stoltenberg.

Stoltenberg, meanwhile, warned that in pulling back from the capital, Russian President Vladimir Putin's military is regrouping its forces in order to deploy them to eastern and southern Ukraine for a "crucial phase of the war." Russia's stated goal currently is control of the Donbas, the largely Russian-speaking industrial region in the east that includes the shattered port city of Mariupol.

"Moscow is not giving up its ambitions in Ukraine," Stoltenberg said.

While both Ukrainian and Russian representatives sent optimistic signals following their latest round of talks a week ago, Russian Foreign Minister Sergey Lavrov said Moscow won’t accept a Ukrainian demand that a prospective peace deal include an immediate pullout of troops followed by a Ukrainian referendum on the agreement.

In televised remarks Tuesday, Lavrov said a new deal would have to be negotiated if the vote failed, and "we don’t want to play such cat and mouse." 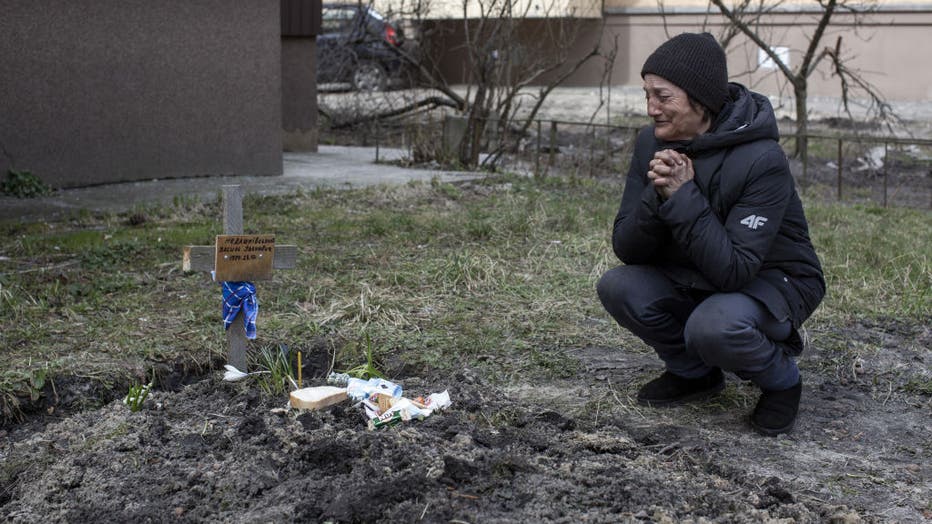 BUCHA, KYIV PROVINCE, UKRAINE, APRIL 04: Tanya Nedashkivska, 57, grieves next to the tomb of her husband buried on the backyard of her house in Bucha, Ukraine, April 4th, 2022. Tanya alleges her husband was tortured and executed by Russian soldiers i

Ukrainian officials said that the bodies of at least 410 civilians have been found in towns around Kyiv that were recaptured from Russian forces and that a "torture chamber" was discovered in Bucha.

Zelenskyy told the Security Council there was "not a single crime" that Russian troops hadn’t committed in Bucha.

"The Russian military searched for and purposefully killed anyone who served our country. They shot and killed women outside their houses when they just tried to call someone who is alive. They killed entire families, adults and children, and they tried to burn the bodies," he said. They used tanks to crush civilians "just for their pleasure," he said.

On Tuesday, police and other investigators walked the silent streets of Bucha. Survivors who hid in their homes during the Russian occupation of the town, many of them past middle age, wandered past charred tanks and jagged window panes with plastic bags of food and other humanitarian aid. Red Cross workers checked in on intact homes.

Many of the dead seen by AP journalists appeared to have been shot at close range, and some had their hands bound or their flesh burned.

The AP and the PBS series "Frontline" have jointly verified at least 90 incidents during the war that appear to violate international law. The War Crimes Watch Ukraine project is looking into apparent targeted attacks as well as indiscriminate ones.

U.S. Secretary of State Antony Blinken said the images from Bucha revealed "not the random act of a rogue unit" but "a deliberate campaign to kill, to torture, to rape, to commit atrocities." He said the reports of atrocities were "more than credible."

"Only non-humans are capable of this," said Angelica Chernomor, a refugee from Kyiv who crossed into Poland with her two children and saw the photos from Bucha. "Even if people live under a totalitarian regime, they must retain feelings, dignity, but they do not." 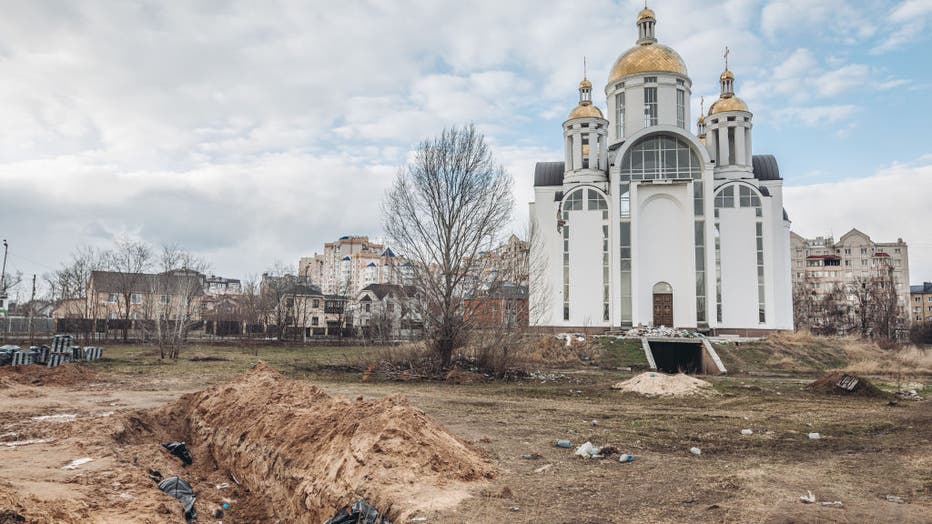 KYIV, UKRAINE - APRIL 4: (EDITOR'S NOTE: Image depicts death) A grave with corpses, victims of the clashes in the church of Bucha, Ukraine on April 4, 2022. (Photo by Diego Herrera Carcedo/Anadolu Agency via Getty Images)

Chernomor is among the more than 4 million Ukrainians who have fled the country in the wake of the Feb. 24 invasion.

Russia has rejected similar accusations of atrocities in the past by accusing its enemies of forging photos and video and using so-called crisis actors.

Kremlin spokesman Dmitry Peskov called the expulsions a "short-sighted" measure that would complicate communication and warned they would be met with "reciprocal steps."

The U.S., in coordination with the European Union and Group of Seven nations, will roll out more sanctions against Russia on Wednesday, including a ban on all new investment in the country, a senior administration official said, speaking on condition to discuss the upcoming announcement.

Also, the EU's executive branch proposed a ban on coal imports from Russia, in what would be the first time the 27-nation bloc has sanctioned the country’s lucrative energy industry over the war. The coal imports amount to an estimated 4 billion euros ($4.4 billion) per year.

Just hours before the latest proposal was announced, Ukrainian Foreign Minister Dmytro Kuleba said that to prevent "new Buchas," the West must impose the "mother of all sanctions" — on Russian oil and gas.

RELATED: US seizes yacht owned by oligarch with close ties to Putin

"A few months of tightening your belts are worth thousands of saved lives," he said.

But Western nations are divided over how far to go. While some are calling for a boycott of Russian oil and gas, Germany and others fear that such a move could plunge the continent into a severe economic crisis.

Lederer reported from the United Nations. Yuras Karmanau in Lviv, Ukraine, and Associated Press journalists around the world contributed to this report.