Dr. Robert Redfield, head of the Centers for Disease Control and Prevention, discussed the state of the coronavirus pandemic in the U.S. heading into the holidays.

GENEVA - While most of the world is looking to officially put 2020 behind them, the United Nations is gearing up for 2021 to be one of the most catastrophic years from a humanitarian perspective.

“The picture we are presenting is the bleakest and darkest perspective on humanitarian needs in the period ahead that we have ever set out. That is a reflection of the fact that the COVID pandemic has wreaked carnage across the whole of the most fragile and vulnerable countries on the planet,” Lowcock said.

“For the first time since the 1990s, extreme poverty is going to increase, life expectancy will fall, the annual death toll from HIV, tuberculosis and malaria is set to double,” he said. “We fear a near doubling in the number of people facing starvation.”

Lowcock explained that while some of the world’s wealthiest countries have invested trillions of dollars into economic relief plans from the COVID-19 crisis, “the same is not true in the poorest countries.”

RELATED: Hundreds ill, 1 dead due to mystery illness in India

Lowcock spoke during the annual Global Humanitarian Overview in which the U.N. Office for the Coordination of Humanitarian Affairs, or OCHA, appealed for $35 billion for its humanitarian needs.

Lowcock said in a U.N. briefing in New York on the overview that he thinks the U.N. appeal will probably raise a record $20 billion by the end of the year -- $2 billion more than last year. But he said the gap between needs and funding is growing and the U.N. is looking to “new players” coming on the scene in 2021, including U.S. President-elect Joe Biden’s new administration.

Speaking to the 193-member U.N. General Assembly last week, World Food Programme (WFP) chief David Beasley warned “2021 is literally going to be catastrophic based on what we’re seeing at this stage of the game,” Reuters reported.

Beasley added that for a dozen countries, famine is “knocking on the door.”

He said 2021 is expected to be “the worst humanitarian crisis year since the beginning of the United Nations” 75 years ago and “we’re not going to be able to fund everything... so we have to prioritize, as I say, the icebergs in front of the Titanic.” 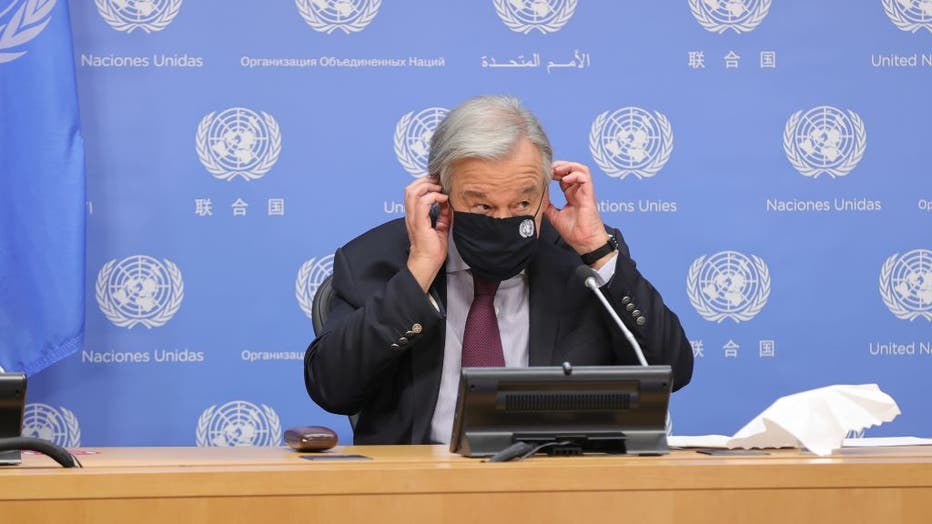 The U.N. humanitarian office says needs for assistance have ballooned to unprecedented levels this year because of COVID-19, projecting that a staggering 235 million people will require help in 2021.

OCHA expects a 40% increase in the number of people in need of such assistance in 2021 compared to 2020 — a sign that pain, suffering and torment brought by the coronavirus outbreak and other problems could get worse even if hopes of a vaccine are rising.

Next year, for countries in dire need of assistance, U.N. officials say its economic impact that’s having the greatest effect on humanitarian needs.

“These all hit the poorest people in the poorest countries hardest of all,” Lowcock said. “For the poorest, the hangover from the pandemic will be long and hard.”

On Dec. 3, the U.N. chief warned Thursday that the social and economic impact of COVID-19 “is enormous and growing” and said it’s foolish to believe a vaccine can undo damage from the global pandemic that will last for years or even decades.

“Nearly a year into the pandemic, we face a human tragedy, and a public health, humanitarian and development emergency,” Guterres said.

The U.N. chief pointed to rising poverty, the looming threat of famine, and the prospect of “the biggest global recession in eight decades,” saying these impacts aren’t due to the coronavirus alone but are the result of long-term inequalities and injustices exposed by the pandemic that must be addressed.

The novel coronavirus is blamed for more than 280,000 deaths and over 14.8 million confirmed infections in the U.S., with the crisis widely expected to worsen in the coming weeks because of Americans' disregard of warnings to stay home and avoid others over Thanksgiving.

Globally, there have been more than 1.5 million deaths and over 67 million confirmed cases of the virus.