Day 6 of the World Cup includes a big match-up between the U.S. and England. FOX 29 Philadelphia's Hank Flynn spoke with LiveNOW from FOX's Josh Breslow as preparations are underway at watch parties nationwide.

DOHA, Qatar - The United States frustrated England in a 0-0 draw on Friday for its second consecutive tie in the World Cup.

The result might not match the U.S.’ famous 1-0 win from the 1950 tournament, but it was the latest occasion in which the Americans have defied the odds against the Three Lions.

England is still waiting for its first win in three World Cup matches against the U.S. after a 1-1 draw in South Africa in 2010.

The U.S. came close to recording a second victory over England at a World Cup after creating several scoring chances, including a first-half shot by Christian Pulisic that smashed the crossbar.

Weston McKennie also fired over from just eight yards out.

England knew victory would guarantee progress to the knockout stages, but a draw still keeps it at the top of Group B with four points. The U.S. is third with two points and needs a win against Iran on Tuesday to advance.

The first time the United States faced England at the World Cup, the hastily assembled American squad was a ragtag group that included a mailman, a grave digger, a dishwasher and a school teacher.

Few of the players had ever met before they headed to Brazil in 1950 to face powerhouse England, and the 1-0 upset victory by the United States is often likened to the 1980 "Miracle on Ice" win over the Soviet Union at the Lake Placid Olympics as being among the biggest moments in American sports history. 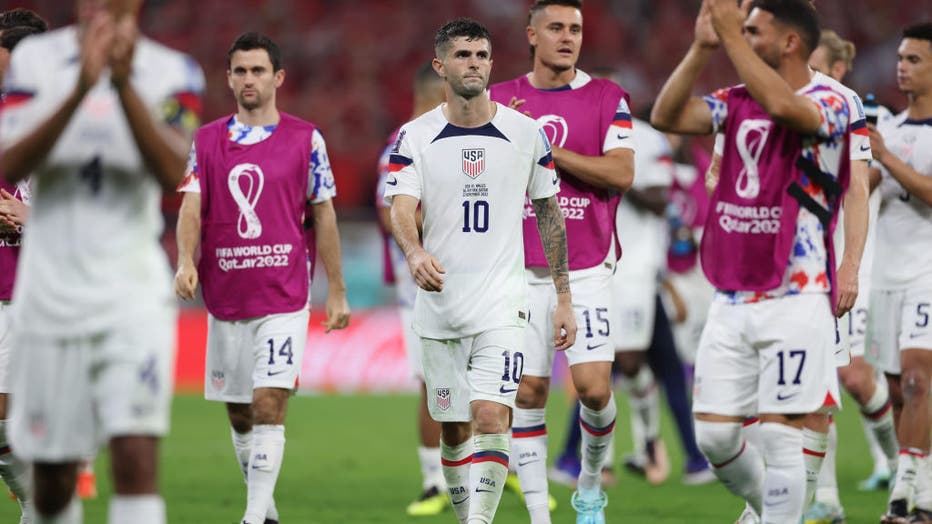 But that 1950 victory for the Americans was a rare win against England, which has won eight of its 11 meetings against the United States. The upside? None of those victories were World Cup matches and the second meeting between the teams on soccer's biggest stage ended in a 1-1 draw in 2010.

Ecuador striker Énner Valencia scored a World Cup-best third goal in a 1-1 draw against the Netherlands that eliminated host nation Qatar from its home tournament.

The draw gave both the Dutch and Ecuador one point apiece to move them to four points in Group A. It left Qatar with zero points after losing 3-1 to Senegal hours earlier. Cody Gakpo fired the Dutch into a sixth-minute lead with a rising shot from the edge of the penalty area. It was the fastest goal scored so far in Qatar. Ecuador leveled in the 49th when Énner Valencia passed the ball into an empty net after a shot was parried. 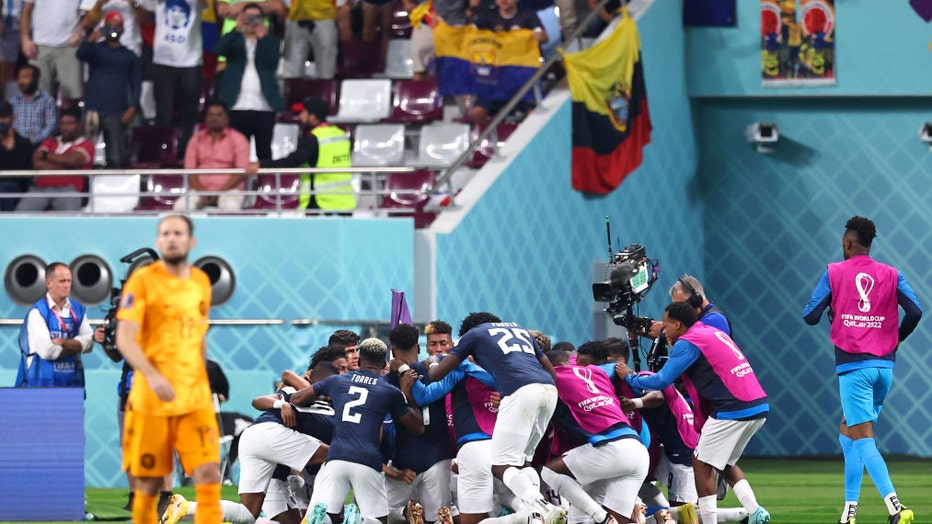 Enner Valencia of Ecuador celebrates after scoring a goal to make it 1-1 during the FIFA World Cup Qatar 2022 Group A match between Netherlands and Ecuador on November 25, 2022 in Doha, Qatar. (Robbie Jay Barratt - AMA/Getty Images)

Senegal sent host Qatar to another loss at the World Cup on Friday, winning 3-1 after a defensive error gifted the African champion the lead. Striker Boulaye Dia drilled in that first goal after Qatar defender Boualem Khoukhi tried to make a clearance and landed on his backside.

Famara Diedhiou made it 2-0 at the start of the second half Friday with a header from a corner. Substitute Mohammed Muntari scored Qatar's goal to make it 2-1. But Qatar's fightback lasted just minutes before Bamba Dieng put Sengal two goals clear again. 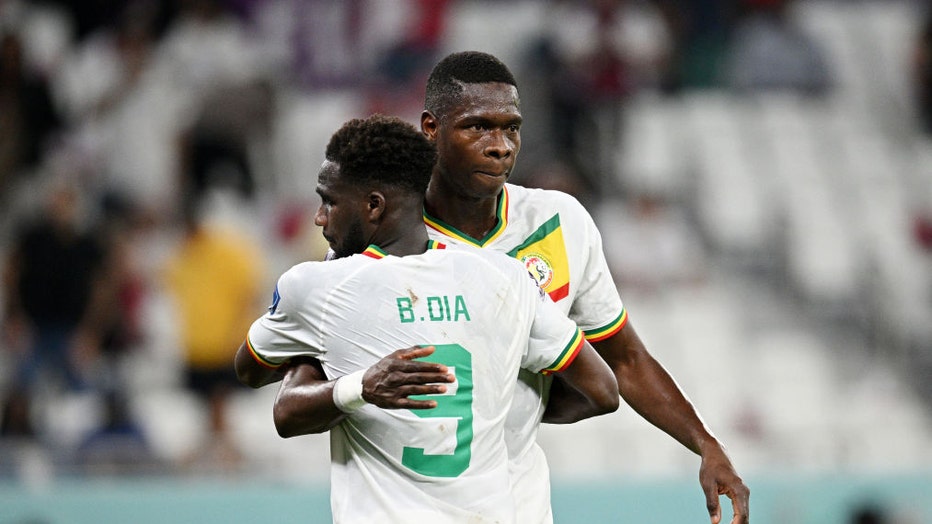 Boulaye Dia (L) and Pape Abou Cisse of Senegal celebrate after the 3-1 win during the FIFA World Cup Qatar 2022 Group A match between Qatar and Senegal on November 25, 2022 in Doha, Qatar. (Stuart Franklin/Getty Images)

Rouzbeh Cheshmi scored in the eighth minute of stoppage time to break a scoreless stalemate and Iran went on to defeat Wales 2-0 at the World Cup on Friday. Cheshmi’s strike from outside the box was just beyond the diving reach of Wales backup goalkeeper Danny Ward, who was pressed into duty when starter Wayne Hennessey was sent off with a red card in the 86th minute.

Ramin Rezaeian added a second goal moments later and Iran wildly celebrated while some of the Welsh players dropped in disbelief to the field. Outside Ahmad bin Ali Stadium, the ongoing protests in Iran spilled over to the World Cup with pro-government fans harassing anti-government national team supporters. 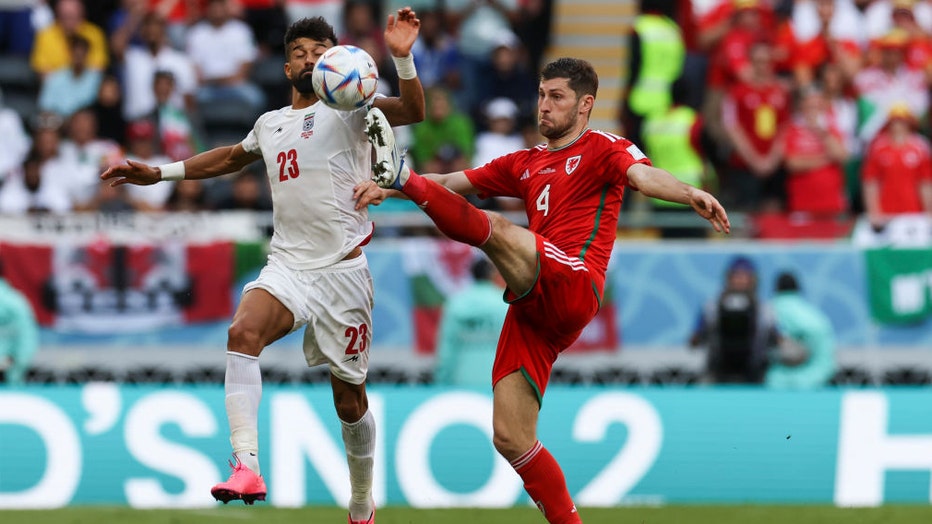 Ben Davies of Wales vies with Ramin Rezaeian of Iran during FIFA World Cup Group B match between Wales and Iran on November 25, 2022 in Doha, Qatar. (Ian MacNicol/Getty Images)

LINK: Get updates and more World Cup coverage at foxsports.com.