TAMPA, Fla. - A frantic CVS store manager called 911 back on May 30 as looters tore through a roll-up security door.

“We are getting break-ins at the CVS on 30th and Fowler! Riots!“  the panicked manager said.

In surveillance video just released by Tampa police, you see two unidentified CVS employees, trapped inside the store, anxiously trying to find an escape before looters break in.

Moments later, they do, and the grab-and-go rush is on. Some looters head down the aisles; others jump the counter looking for the cash registers. One looter is seen on video trying push over store shelves.

By this time, the manager and the employee are sneaking out the back. “We’re coming outside now,“ the manager tells a 911 dispatcher.

Inside, a swarm of looters are snatching as much as they can.

911 dispatcher: How many people are there?

CVS manager: There are a lot of people

911 dispatcher: Are they inside already?

CVS manager: They are.

911 dispatcher: Did they threaten you guys? Did they show any weapon?

CVS manager: No, no. They left us alone. We didn’t talk to them; they didn’t interact with us. They did whatever they were going to do. 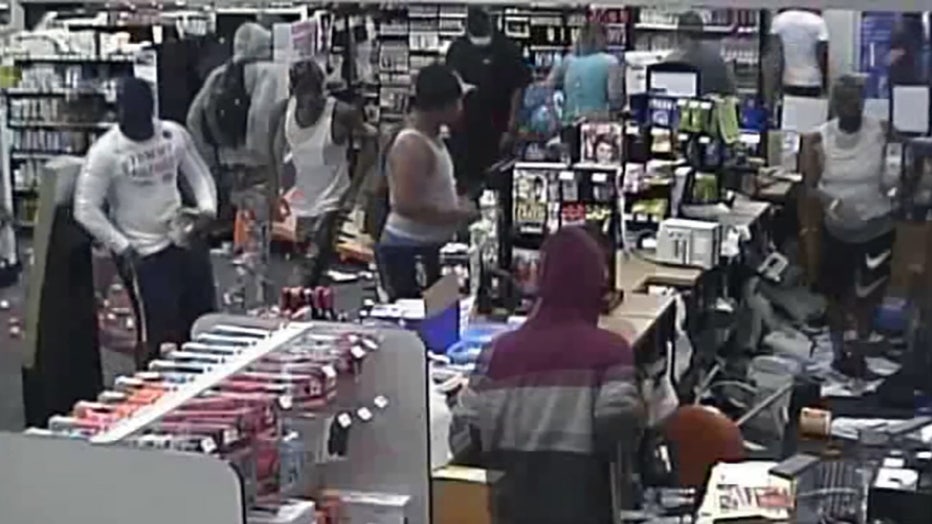 While some head for the exit with their loot, others are not done. They target the pharmacy next.

In the call, the manager can be heard trying his best to calm a scared employee, who is sobbing. “It’s OK,” he says. “I got you.”

All of this is hard to stomach for Tampa police detective Scott Savitt. He’s tracking down the looters, going through hours of footage.

Tampa police are tracking down those who looted and rioted during civil unrest.

“The hardest part is you feel helpless as an observer watching from here, wishing you could’ve been there. That’s why we are working so hard right now,” he explained.

CrimeStoppers is offering a reward for information leading to arrests.

RELATED: Deputies need help identifying hundreds of Walmart looters who stole more than $100,000 worth of items