ST. PETERSBURG, Fla. - The original owner of the Tampa Bay Devil Rays died Sunday. Vince Naimoli was 81 years old and suffered from a rare neurological condition. He had been in declining health for several years.

For decades, groups of investors from the Tampa Bay area tried to bring Major League Baseball here, but it didn't happen until Vince Naimoli stepped up.

"Vince sued Major League Baseball and that's what eventually lead to expansion in 1998 and the Tampa Bay Devil Rays," said John Romano, a columnist for the Tampa Bay Times.

Naimoli was from a blue-collar background in New Jersey. He was a tough guy with a sometimes confrontational style which helped him succeed in some areas, but fail in others.

"He was a bulldog," said Bob Basham, co-founder of Outback Steakhouse and one of Naimoli's general partners in the Devil Rays ownership group. "I remember Vince as a very hard-working guy. I mean he was very passionate about whatever he did. Without Vince, there wouldn't be baseball in the Tampa Bay area."

Naimoli attended nearly every game, but the skills he used to build Anchor Glass Container Company didn't always translate to the business of sports.

"In that business, you're trying to attract fans and Vince had never done that before," said Romano.

Naimoli called out companies for not buying seats and sometimes clashed with community leaders. Once, when a police officer stopped his wife in their car, Naimoli reportedly asked the officer, "Do you know who I am?"

At Ferg's Sports Bar near Tropicana Field, fans reacted to Naimoli's passing Monday. Was he a hero or a villain?

"A little of each," said fan and former city council member Bill Dudley. "I don't think he had the right temperament being a businessman."

He was known for his bluster, but also his philanthropy, including a $1 million donation to the University of South Florida's athletics program. Several sports venues and a business school program are named for the Naimoli family.

He stepped down as general partner in 2005 when the team was sold to Stuart Sternberg. The Rays invited him back to throw the first pitch for the 2015 season. He was recognized for bringing baseball to Tampa Bay. 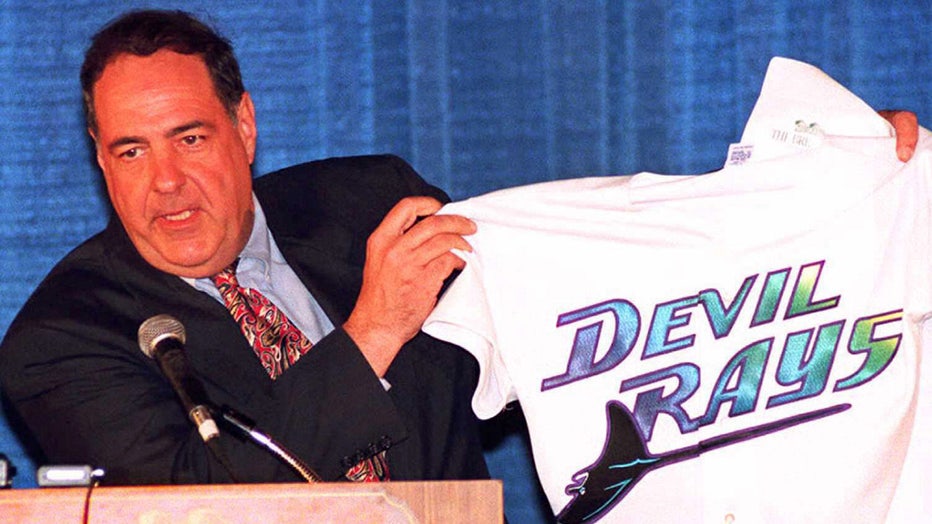 "We needed a fighter at that point and Vince was a fighter," added Romano.

A jersey patch will be worn on the players' jerseys for the remainder of the season. The Rays said there will be a pregame recognition at the next home game, which will take place Friday against the Cleveland Indians.

The Rays released the following statement:

"The Tampa Bay Rays are deeply saddened to learn of the passing of former owner and CEO, Vince Naimoli. Vince was unyielding in his pursuit of a Major League Baseball franchise for Tampa Bay, and his success in landing the then Devil Rays changed the region's sports landscape forever. In addition to his distinguished business and baseball careers, his family's philanthropic efforts in the community will be felt for generations. We are grateful for his leadership and wish his family peace during this difficult time."