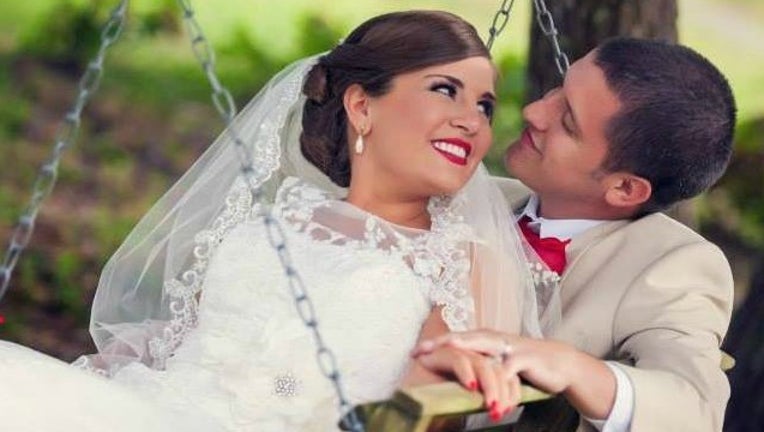 What do you do when you want to spread some incredible news? You put on your dancing shoes and sing to one of the hottest songs on the airwaves! And by dancing shoes, we mean the comfiest slippers ever.

Steffaney and Austin Bass live in Jacksonville, Florida,  and their Facebook video announcement is becoming a hit across the nation. The couple has been trying to get pregnant for a year and a half, a feat that hasn’t been easy for them.

Steffaney tells us Austin has Arnold Chiari Malformation, a condition in which brain tissue extends into the spinal canal. He also has a cyst on his brain that is being drained by a shunt, keeping the cyst from growing. This prevents pressure from building in Austin’s brain. He has undergone 19 brain surgeries over the past 10 years. He also has stress-related tics that cause a lot of pain, keeping him from working.

But Austin hasn’t been the only one facing medical issues. Given Steffaney’s history with Polycystic Ovary Syndrome (PCOS), she always had in the back of her mind there may be trouble conceiving.

She visited her OBGYN in November, with high hopes of receiving good word on a pregnancy. But Steffaney didn’t get to hear that. Instead, she was referred to a fertility specialist. While sorting out thoughts and scheduling new appointments with yet another doctor, a few weeks later, they found out they are pregnant!

We asked Steffaney the first thing she did as soon as she found out the incredible news. She said she called the fertility doctor to cancel her appointment, then she ran home to tell Austin.

However, she didn't tell him right away. She waited to get the doctor's confirmation. Then she unleashed the incredible information. Steffaney said sharing the news with Austin was the most amazing moment she has ever experienced in their relationship. After huge hugs, they knew their lives were complete.

Letting their creativity and spunk take flight, they delivered their news via Facebook, with their own version of Bruno Mars’ Uptown Funk. Cuddled up on the couch as any happy couple would be, Bass sings, “We’re pregnant hallelujah! Woooo!”  And Austin rocks some major shades while showing off the ultrasound images. Their video already has more than 35,000 views.

Steffaney says despite the setbacks and hardships they’ve endured together, Austin is “still the most positive and strongest person” she has ever met. We say it takes two to tango—Steffaney is just as strong as Austin! Their story is a good reminder that anything can happen as long as you stay patient and persevere, with a lot of love.

We would like to congratulate the couple and soon-to-be Baby Bass! We wish you all the very best!

This is their awesome video...