The Metro Richmond Zoo in Virginia announced the births of three cheetah litters, welcoming a total of 11 new cubs.

MOSELEY, Va. - A zoo in Virginia announced the births of three cheetah litters, welcoming a total of 11 new cubs to their family.

The Metro Richmond Zoo says two of the litters arrived in April, while the most recent litter arrived in late August.

Rey was the first cheetah to give birth on April 10, welcoming four cubs, one male and three females whose father is Kalu. This is Rey's second litter.

WATCH: Sea turtle hatchlings scurry across North Carolina beach on their way to the ocean

On April 26, Vaila also gave birth to four cubs sired by Duma: one male and three females. The zoo said one female cub died shortly after being born due to a cleft palate birth defect, but the remaining cubs are healthy. This is Vaila's third litter.

The most recent litter is Khari's and was also sired by Duma. This is Khari's fourth litter. The cubs' genders haven't yet been released. The zoo said they are not determined until they have their first vet checkup at one week old. 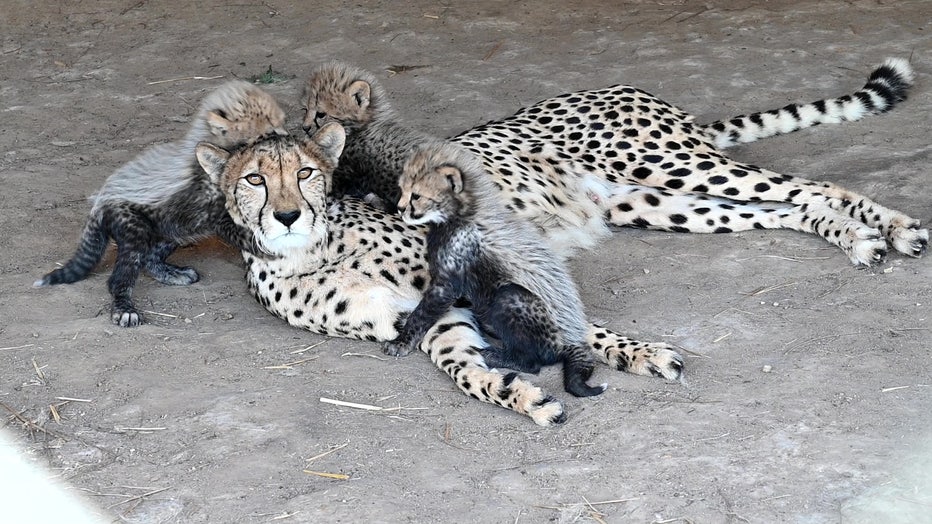 Rey with her four cubs (Metro Richmond Zoo via Storyful)

All seven cubs born in April have had several vet checkups, have been dewormed, and have received their essential vaccinations, the zoo said. According to zookeepers, the cubs are all in "great health and growing rapidly." All three moms are "experienced, caring and attentive," they added.

The cubs were all born at the Metro Richmond Zoo's Cheetah Conservation Center, a private, specialized area solely dedicated to the protection of cheetahs. It is located on zoo grounds but is not open to the public. Currently, the zoo cares for 36 cheetahs. Since 2013, 77 cheetahs have been born in the zoo's conservation center.

"The cheetah’s wild population has decreased 93% in the last 120 years, making it Africa’s most endangered big cat. To protect the future of this species, a thriving population of cheetahs in zoological parks is necessary," the Metro Richmond Zoo said. "Many of the cheetahs at the zoo have high genetic value since they are unrelated to most of the cheetahs in the United States."