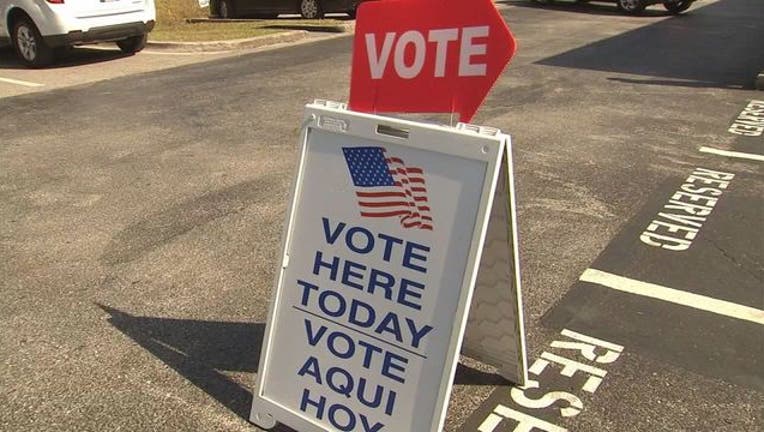 TALLAHASSEE (NSF) - By late Tuesday night, it will be better known how much sway President Donald Trump holds among Republican voters.

Meanwhile, Democrats will decide if they are marching for governor in the year of the woman, or if they want to elect the state’s first African-American governor or a wealthy, progressive businessman.

Voters in both parties also will choose nominees to replace term-limited Attorney General Pam Bondi and to succeed Putnam as agriculture commissioner.

The Republican contest for attorney general has emerged as the most divisive of the Cabinet contests. State Rep. Frank White, R-Pensacola, continues to hammer his primary opponent, former Hillsborough County Circuit Judge Ashley Moody, over her family’s part in a condominium-development lawsuit against Trump nearly a decade ago and for having once been a registered Democrat.

In a new 30-second ad by White, an announcer proclaims, “Ashley Moody was a lifelong Democrat.” The ad includes an edited part of an audio clip from a TV reporter who said, “It’s true Ashley Moody was first a registered Democrat, but it’s false she has been her whole life. She entered college as a Democrat and in her 20s became a Republican.”

However, in the ad, the audio says: “It’s true Ashley Moody was registered Democrat,” with “first a” edited out. The ad also does not include the explanation about Moody becoming a Republican.

Moody’s campaign, which has the backing of Bondi, has labeled White a “car salesman turned politician” with no prosecutorial experience. White is a freshman legislator who is an executive of a chain of family-owned auto dealerships.

The Democratic primary for attorney general also has included animosity, with Rep. Sean Shaw of Tampa filing a lawsuit arguing that his opponent, Hillsborough County lawyer Ryan Torrens, should be decertified as a candidate. Shaw has alleged Torrens improperly used a check written in his wife’s name to help cover the qualifying fee for the Cabinet race. Torrens has countersued for libel.

The tone has a been a little more tempered in the races for agriculture commissioner.

In the Republican contest, Rep. Matt Caldwell of North Fort Myers has lately campaigned in South Florida with U.S. Sen. Marco Rubio. State Sen. Denise Grimsley of Sebring has rolled out her own big-name endorsements, while former state Rep. Baxter Troutman of Winter Haven has used his personal wealth to fund ads.

A fourth Republican candidate, Plant City palm-tree farmer and retired Army Col. Mike McCalister, is running his third statewide campaign and has had little money to get his message out.

On the Democratic side of the race for agriculture commissioner, Fort Lauderdale lawyer and medical-marijuana advocate Nikki Fried has been scoring free media. Fried went public this week with a dispute about Wells Fargo dropping her campaign account because of her links to the medical-marijuana industry.

Otherwise, Fried and her primary opponents, Homestead Mayor Jeff Porter and environmental scientist Roy David Walker of Fort Lauderdale, have struggled for funding and attention compared to the other Cabinet contests.

A number of Congressional primaries are also drawing heavy attention heading into Tuesday.

The retirement of longtime Republican Congresswoman Ileana Ros-Lehtinen has attracted nine Republicans and five Democrats for the Congressional District 27 seat in Miami-Dade County.

Additional Republican retirements have created competitive primaries in other parts of the state.

Republicans are looking to replace retiring Congressman Dennis Ross in Congressional District 15 with a GOP field of five candidates who include former state Rep. Neil Combee of Auburndale and state Rep. Ross Spano of Dover.

Another race that, at least officially, must be watched Tuesday is the Republican U.S. Senate primary.

Legislatively, the biggest fights will occur in the November general election.

Going into Tuesday’s primaries, Democrats are assured of holding 27 state House seats heading in the 2019 legislative session and 15 seats in the Senate. They will also hold five seats in Congress.

Meanwhile, Republicans are assured of occupying 12 state House seats, eight seats in the Senate and none in Congress.

The numbers are based on a lack of primary opposition, candidates who will face only write-in opposition in November and members of the Senate who are not up for election this year.

Counted among the Republican gains is House District 56 in DeSoto, Hardee and part of Polk counties. The race, featuring a pair of Republican candidates, was moved to the November ballot after a write-in candidate who had closed the primary withdrew from the contest.

The remaining 81 House races, 17 Senate contests and 22 congressional races are being contested, mostly between Republicans and Democrats. In some cases, independents or third-party candidates are also on the slate.