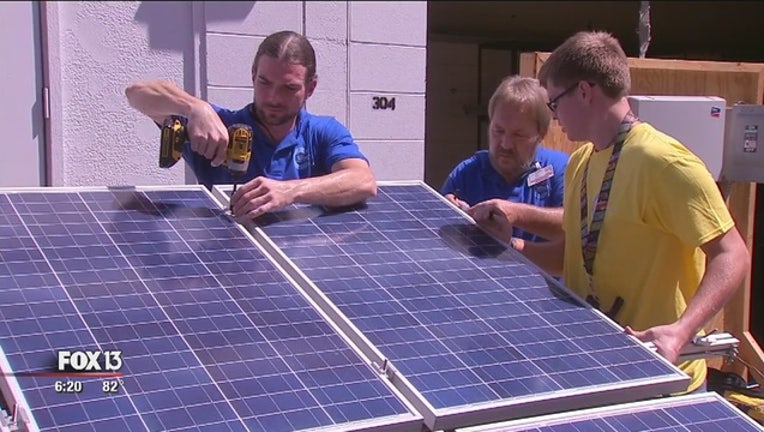 Opponents who argued the amendment would hinder the development of alternative energy in Florida, celebrated the defeat of the measure, known as Amendment 1, as most counties continued posting results. As of 9:30 p.m., the amendment had received support of about 51 percent of voters --- far below the 60 percent threshold, according to the state Division of Elections website.

Tory Perfetti, chairman of the opposition group Floridians for Solar Choice and director of Conservatives for Energy Freedom, called the vote a "victory for energy freedom."

"We defeated one of the most egregious and underhanded attempts at voter manipulation in this state's history," Perfetti said in a prepared statement.

Powered by the utility money, Consumers for Smart Solar spent at least $25.47 million to get the measure on the ballot and to advertise and campaign for the amendment, which it said would protect consumers.

But critics contended the measure could lead to "discriminatory charges" against rooftop solar users, as the ballot language said that people who haven't installed solar on their property "are not required to subsidize the costs of backup power and electric grid access to those who do."

Contending the measure was purposely deceptive, the Florida Solar Energy Industries Association and the group Floridians for Solar Choice failed last week to get the state's Supreme Court to strike down the initiative.

The groups had pinned their argument on a tape that included comments by Sal Nuzzo, vice president of policy at the James Madison Institute. On the tape, first reported by the Miami Herald, Nuzzo described how to use a "little bit of political jiu-jitsu" in promoting solar to win support for desired changes in policy.

The court had approved the ballot language for the amendment 4-3 in March.

Consumers for Smart Solar called the lawsuit "frivolous" and a "political stunt" intended to drum up last minute media attention for their anti-Amendment 1 campaign.

The Consumers for Smart Solar amendment was introduced last year after Floridians for Solar Choice launched a petition drive for its own ballot initiative that sought to ease regulations and allow businesses to generate and sell up to two megawatts of solar power to customers on the same or neighboring properties.

After failing to collect the needed signatures to get on this year's ballot, Floridians for Solar Choice is eyeing the 2018 election for its proposal.

"The millions of dollars in slick ad buys and glossy mailers did not win the day as opponents of Amendment 1 successfully harnessed social and earned media to educate Floridians about the true intent of this deceptive proposal while tapping a vast network of organizations, solar businesses and supporters who remain committed to growing --- not restricting --- Florida's solar industry," Floridians for Solar Choice said in a release Tuesday.

The spending on the amendment approached the $28.65 million the trial lawyer-backed Floridians for Patient Protection effort spent in 2004 pushing ballot initiatives opposed by the Florida Medical Association.

Consumers for Smart Solar pointed to high advertising costs, bolstered by Florida's place as a key battleground state in the presidential election, for driving its spending.

© 2016 The News Service of Florida. All rights reserved. Posting or forwarding this material without permission is prohibited. You can view the Terms of Use on our website.