TAMPA, Fla. - The countdown ticks lower and the excitement inches higher as the Super Bowl is now just two days away. Fans have begun arriving from across the country and festivities are picking up.

Whether you’re an NFL history buff, a lover of live music, or just searching for an event to enjoy, look no further than the Riverwalk this weekend. The official NFL Super Bowl Experience will be in full swing with their three NFL zones.

Julian B. Lane Park is the place where fans can run, kick and pass like a pro, see the Lombardi Trophy, and find every Super Bowl ring ever made -- but that’s also the only area that’s by reservation only and, unfortunately, if you don’t already have one you won’t be able to get in because they’ve been fully booked for a while now.

However, if you don’t have a reservation, there is plenty to check out on the other side of the river at Armature Works, Curtis Hixon Park -- the Technology Village just south of the Kennedy Bridge -- and at Sparkman Wharf. There will be food trucks, live music, DJs and places to shop for official Super Bowl merchandise.

ALL STORIES: Super Bowl in Tampa

Once the sun goes down, you’ll want to get down to the Tampa Convention Center and Sail Pavilion area where the Jose Gasparilla pirate ship will light up the skies around Tampa Bay with four fireworks and laser light shows each night. They go off hourly both tonight and Saturday starting at 6:55 p.m.

Remember, there’s a very convenient way to check it all out. The Super Bowl shuttle is making nine stops around downtown and Tampa Heights. It’ll connect you to four different parking areas, as well as all of the NFL experience zones. It operates from 11 a.m. to 11 p.m. through Feb. 6. 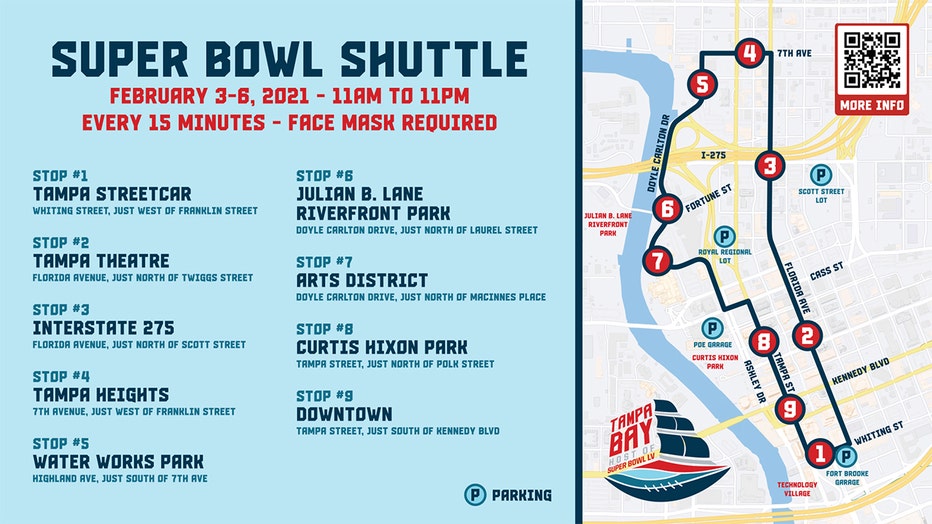 Just remember if you’re looking to get into one of those official NFL Experience zones, entry is free but you will need to download the NFL OnePass App to choose your timeslot.

Also, whether you’re inside or outside, you will need a mask. They are required outdoors in the following areas: