Little Island park opens at Pier 55 on the Hudson River.

NEW YORK - A whimsical new park that appears to float on pilings above the Hudson River opened to the public just off the Manhattan shoreline Friday, four years after a fight between media mogul Barry Diller and a billionaire real estate developer threatened to derail it.

The new park, called Little Island but nicknamed Diller Island while under construction, was built with $260 million from the foundation of Diller, the former 20th Century Fox CEO, and his wife, fashion designer Diane von Furstenberg.

The opening comes on a sunny and warm day in New York City.

It joins a string of piers along Manhattan's west side that have been redeveloped for recreational use over the last 20 years, but its unusual design sets it apart.

Little Island's flowers, trees, and performance spaces rest on 132 concrete pots that the park's creators call tulip pots. The pots are set on pilings of different heights, so that paths wind through the 2.4-acre (1-hectare) park at a gentle, rolling grade.

The park is reachable by two bridges.

The design is from Thomas Heatherwick, who also created the Hudson Yards climbing structure known as the Vessel, some 20 blocks north of Little Island. 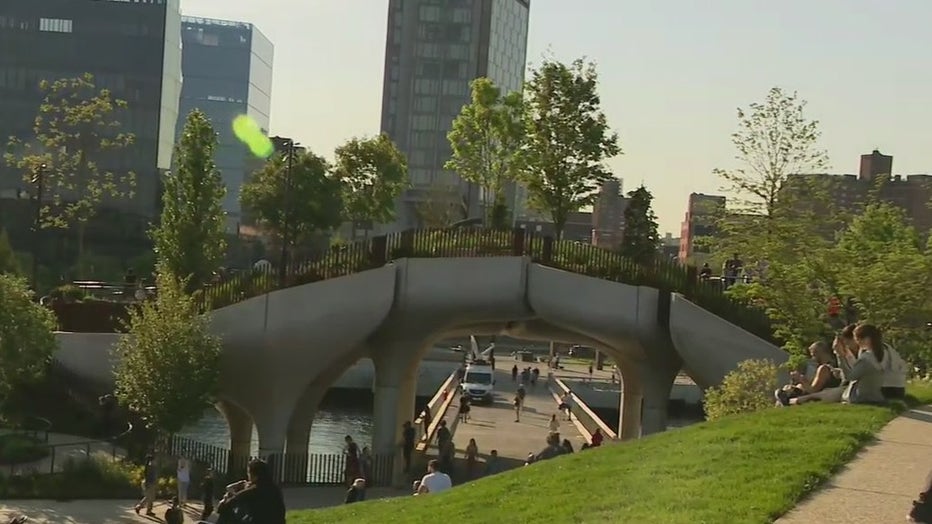 Little River at Pier 55 along the Hudson River. (FOX 5 NY)

Diller, also a major donor to the nearby High Line, has spoken of Little Island as an enchanted forest or a visit to Oz.

"All of it is an oasis of everything fun, whimsical, playful that we can conjure," he says in a video on the park's website.

Plans for the project, part of the state-run Hudson River Park, were announced in 2014, but several lawsuits were filed arguing that the park had been planned without public input and could threaten marine wildlife. Real estate developer Douglas Durst, who had been pushed out of his position as chair of the fundraising group Friends of Hudson River Park a few years before, was revealed to have bankrolled the lawsuits filed by the nonprofit City Club of New York.

Facing rising costs because of the litigation, Diller announced in September 2017 that he was pulling the plug. He agreed to revive the project the next month after Gov. Andrew Cuomo brokered a deal.

What is Little Island?

New York City's newest public park is under construction in Hudson River Park by West 13th Street. It is called Little Island and is on track to open to the public in spring 2021. Construction of the park is largely funded by the Diller-von Furstenberg Family Foundation.

"We are pleased the project helped get Hudson River Park finished," Durst, the one-time lawsuit bankroller, said through a spokesperson Wednesday.

The spokesperson said the reason Durst had supported the litigation was because the project hadn't gone through the required regulatory process.

Little Island will be open from 6 a.m. to 1 a.m. every day, but there will be timed entry from noon to 8 p.m. at least through September, executive director Trish Santini said.

Entertainment including musical performances, theater and dance will start in mid-June, she said.

Producer Scott Rudin, who stepped down from the Broadway League last month over allegations of abusive behavior, was part of the team planning the performances spaces but "doesn’t have a formal ongoing relationship with the project," Santini said.

There will be a mix of free and ticketed performances at the park's a 687-seat amphitheater. A smaller stage in an area called the Glade will host additional performances.

New Yorkers and visitors who walk on the High Line or bike along the waterfront have watched as Little Island was assembled, piece by piece.

The concrete tulips that support the park were fabricated and pieced together in upstate New York and floated down the Hudson by barge, four at a time, Santini said.

Planting started after the massive tulips, which some liken to mushrooms, were in place at the end of 2019. The park's landscaping was designed by Signe Nielsen of Mathews Nielsen Landscape Architects to evoke a leaf floating on water. It features 35 species of trees, 65 species of shrubs and 290 types of grasses, vines and perennials.

Elise Myers is a doctoral candidate and Lamont-Doherty Earth Observatory.

Little Island's human-made hills provide views of the Hudson on one side and city on the other, but the park's carefully constructed topography makes it feel like its own little world.

"I think it’s going to represent for New York a place to come to rest and restore but also ignite their imaginations and remind us all that we’re creative," Santini said. "My hope is that people come back time and time again because they realize every time they come there’s always something new and fun to do."