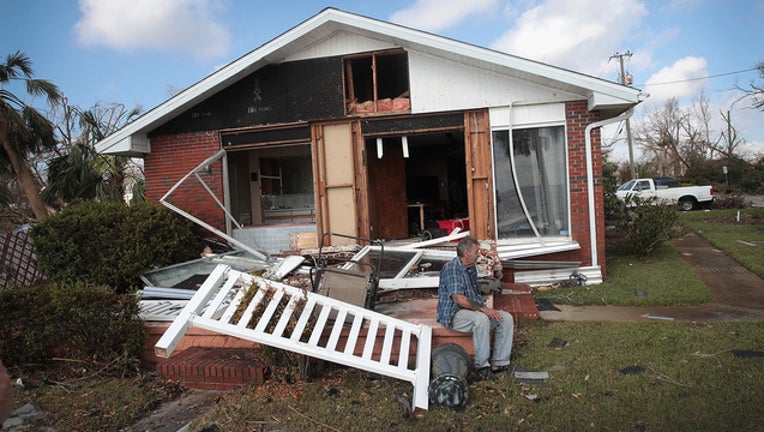 Willie Burton sits on his neighbor's back porch after it was damaged by Hurricane Michael on October 15, 2018 in Panama City, Florida. (Photo by Scott Olson/Getty Images)

TAMPA (FOX 13) - With between $2-billion and $8-billion in claims coming on thousands of destroyed homes, are Florida's home insurance rates at risk of increasing?

Jeff Chernoff, who runs an insurance company in Tampa, says there are so many outstanding claims from 2017's Hurricane Irma that payouts may be piling up.  He expects insurers to request from the state the right to charge a modest increase in the coming months.

"It is going to vary carrier to carrier," he said. "It will vary based on what their loss ratios are looking like, how much they have paid out in claims."

But the director of FSU's Storm Risk Management Center, Jack Nicholson, tells FOX 13 that losses from Irma of $10 billion were even more than what’s expected from Michael, around $8 billion.

He says the system is likely to absorb both without much trouble.

"Given Hurricane Irma last year, that loss was easily digested," said Nicholson. "As a matter of fact, new money came into the system. Rates were actually very stable and may have come down somewhat."

But he also points out that home insurers in Florida buy backup insurance -- called reinsurance -- in case of a disaster even bigger than Michael or Irma.

Our rates may hinge on whether the steady stream of worldwide disasters continues.

If those giant reinsurers have more payouts, that could be a problem.

"That is going to be a supply and demand issue based upon what the level of catastrophes are this year," said Nicholson.

As of Monday afternoon, 38,000 property casualty claims have been filed as a result of Hurricane Michael thus far, totaling $5.7 million.