Water no longer being pumped out of Piney Point

PALMETTO, Fla. - A little more than a week after fears of a contaminated water flood led to a state of emergency, officials say they’ve been able to stop dumping wastewater from the old Piney Point phosphate mine.

The state Department of Environmental Protection made the announcement Friday afternoon, and FOX 13’s Kimberly Kuizon confirmed that the flow of greenish fluid at Port Manatee had stopped.

It was last Thursday when an engineer with HRK Holdings, the current owners of the now-inactive site, warned that a leak in one of the wastewater ponds could lead to an "uncontrolled release" of water, with the potential to flood nearby homes and businesses. 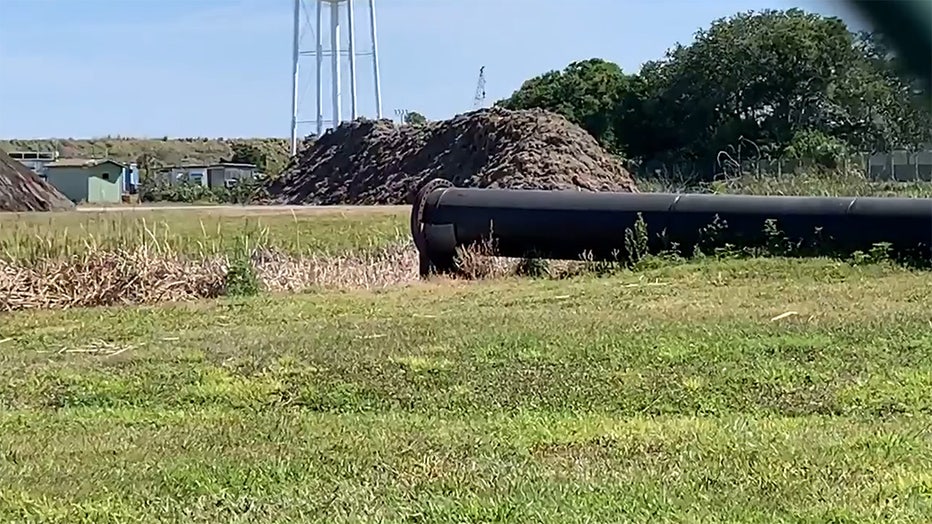 Dumping at Port Manatee had ceased as of Friday, April 9.

Faced with the possible emergency, county commissioners declared a state of emergency and issued evacuation orders while the DEP gave the go-ahead for HRK to conduct a controlled release of water into Tampa Bay at Port Manatee.

Now, with the leak contained and the wastewater levels reduced, HRK was able to stop pumping water out of the pond.

Environmental scientists plan to monitor the bay water for several months for any changes. They fear the nutrient-heavy wastewater will lead to algae blooms, which could kill off marine life and even be hazardous to humans.

"During the springtime, when it's normally a drought season, the bay isn't used to having that amount of nutrients flowing into the bay," said Peter Clark, the president of Tampa Bay Watch.

"Sea grass just doesn't provide habitat for fish and wildlife, but they are also a food source for other organisms like manatees as well," he continued.

They'll monitor any changes and are hoping for the best.

"Generally, that's a high-quality water quality part of Tampa Bay, the sea grasses are extremely productive and healthy down that way. That's why everybody is so concered about all these nutrients flowing into the Bay," he added.

Many residents who are new to Florida may be hearing about this environmental dilemma for the first time. But it’s not a new issue and the current crisis is years in the making.

Meanwhile, engineers will continue to work on plugging the leak in the pond using underwater drones and laying down a steel plate.

"The plan is, tomorrow morning, they will take a 10-foot by 10-foot, one-inch steel plate and float it over the breach and gradually lower it to seal in that leak which will contain it," explained Dr. Scott Hopes, Manatee County administrator.

If any water needs to be released again, the DEP is working with a number of companies to come up with a way to remove the harmful nutrients before the water is dumped into the bay.

In the long-term, Manatee County wants to get rid of all that wastewater. Earlier this week, commissioners approved a deep well injection site that will be fast-tracked through the DEP.

Water will be treated and then injected deep below the aquifer, then capped off on county property.