The wastewater from a reservoir holding fertilizer by-product at Piney Point’s abandoned phosphate plant contains a mix of ingredients for harmful algae blooms. Scientists say they want to get ahead and monitor what kind of impact is occurring as millions of gallons of the water head towards Tampa Bay.

A team of University of South Florida scientists will head out on a research vessel Wednesday morning to collect water samples, surface sediments, and fish from Tampa Bay and Port Manatee to assess changes that have resulted from the wastewater that’s ended up in the bay.

USF said some test results, like pH, will be apparent immediately, but most tests will take weeks to months to assess.

READ: Who's to blame for the Piney Point wastewater mess -- and its $200M price tag?

The wastewater contains phosphates and nitrogen, and the algae blooms can have a devastating ripple effect on sea life that have environmentalists and those working in the fishing industry worried.

"Seagrass is just like the grass on your lawn," explained Peter Clark, president and founder of Tampa Bay Watch. "It needs a certain amount of sunlight to grow. So, when you shade it out with and algae bloom, it doesn’t allow the seagrass to grow, and it eventually will die."

He said the nitrogen and phosphates essentially fertilize the bay. The first organism that absorbs those nutrients is algae.

Fishing guides call seagrass a vital base to the ecosystem. It cleans the water, gives fish a place to breed, hatch, and more.

"All the birds, the fish, the manatees, and the manatees are having a hard enough time. When you start killing the seagrass off that these mammals are eating, you’ve got problems," explained Capt. Scott Moore of Moore Fishing. 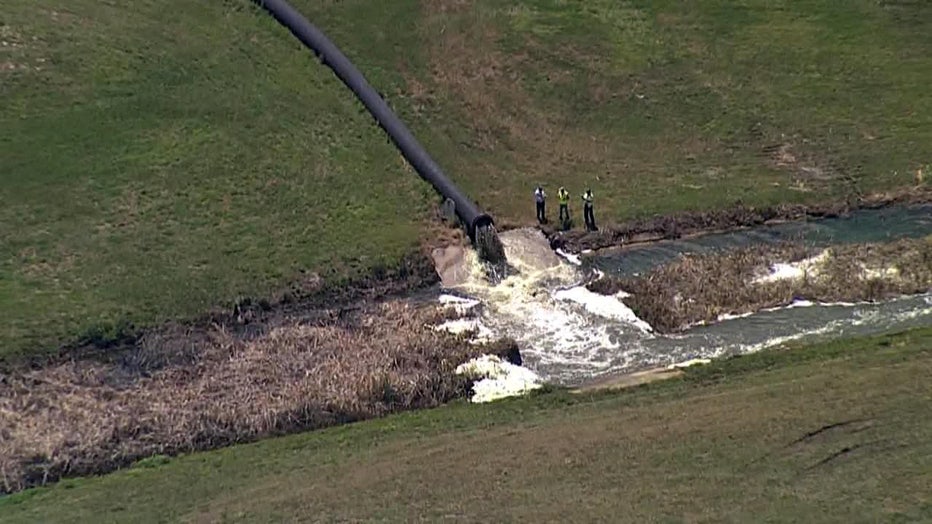 Meanwhile, the leak in the containment wall continues, but officials say the seepage rates have decreased. More than 34 million gallons of water per day from Piney Point continue to flow through Port Manatee and into Tampa Bay.

So far, some 180 million gallons of water have been removed from the leaking reservoir.

Federal, state, and local officials said they are still working to get a fix. They said they’ve secured an underwater submersible to try and locate the leak, and fix the liner.