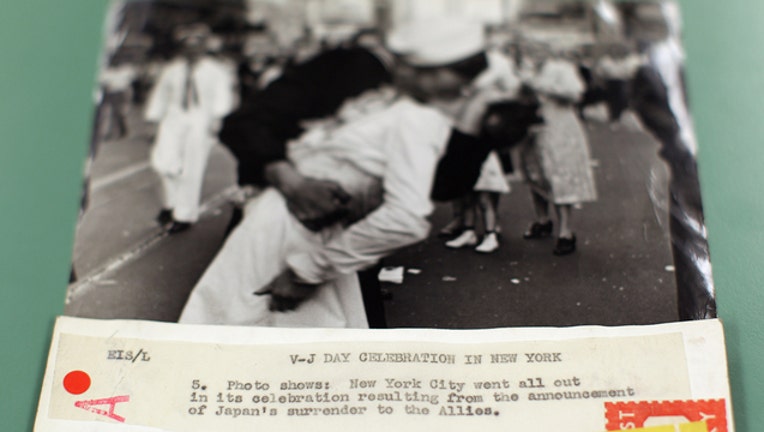 A black and white print of a couple kissing in Times Square on VJ Day, taken by Alfred Eisenstaedt, is laid out from the vast collection of historic photographs stored in the Hulton Archive in London, England. (Photo by Oli Scarff/Getty Images)

NEW YORK (AP) - The woman who was kissed by an ecstatic sailor in Times Square celebrating the end of World War II has died at the age of 92.

Greta Zimmer Friedman's son says his mother died Thursday at a hospital in Richmond, Virginia. She died from complications of old age, he said.

Friedman was a 21-year-old dental assistant in a nurse's uniform on Aug. 14, 1945, known as V-J Day, the day the Japanese surrendered. People spilled out into the streets from restaurants, bars and movie theaters in New York City when they heard the news. That's when George Mendonsa spotted Friedman, spun her around and planted a kiss on her. The two had never met.

In fact, Mendonsa was on a date with an actual nurse, Rita Petry, who would later become his wife.

The photo by Alfred Eisenstaedt is called "V-J Day in Times Square" but is known to most the world over as simply, "The Kiss." Mendonsa says that in some photos of the scene, Petry could be seen smiling in the background.

The photo was first published in Life, buried deep within the magazine's pages. Over the years, the photo gained recognition, and several people claimed to be the kissing couple. In an August 1980 issue of Life, 11 men and three women said they were the subjects. It was years until Mendonsa and Friedman were confirmed to be the couple.

Joshua Friedman says his mother recalled it all happening in an instant.

"It wasn't that much of a kiss," Friedman said in an interview with the Veterans History Project in 2005. "It was just somebody celebrating. It wasn't a romantic event."

The photograph has become one of the most famous photographs of the 20th century.

Both of Friedman's parents died in the Holocaust, according to Lawrence Verria, co-author of "The Kissing Sailor: The Mystery Behind the Photo that Ended World War II." Friedman, who had escaped Austria, got to the U.S. when she was 15.

Friedman will be buried in Arlington National Cemetery, next to her late husband, Dr. Misha Friedman.