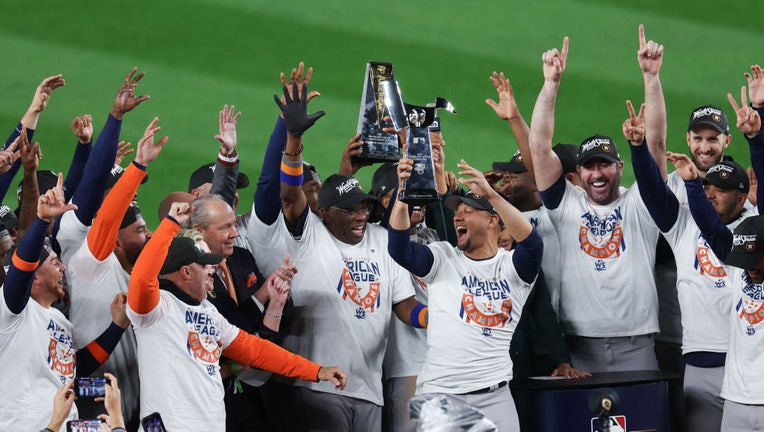 The Houston Astros celebrate defeating the New York Yankees in game four of the American League Championship Series to advance to the World Series at Yankee Stadium on October 23, 2022. (Jamie Squire/Getty Images)

"There were quite a few of us," Matthews recalled.

When fans watch the Houston Astros and Phillies line up this week to begin the Fall Classic, it will be a much different picture.

To be sure, Houston's Jose Altuve and Philadelphia's Jean Segura are among scores of Latin players helping keep big league rosters diverse.

But for the first time since 1950, shortly after Jackie Robinson broke the Major League Baseball color barrier, there project to be no U.S.-born Black players in this World Series. Zero.

"That is eye opening," said Bob Kendrick, president of the Negro Leagues Baseball Museum in Kansas City, Missouri. "It is somewhat startling that two cities that have high African American populations, there's not a single Black player."

"It lets us know there's obviously a lot of work to be done to create opportunities for Black kids to pursue their dream at the highest level," he said. 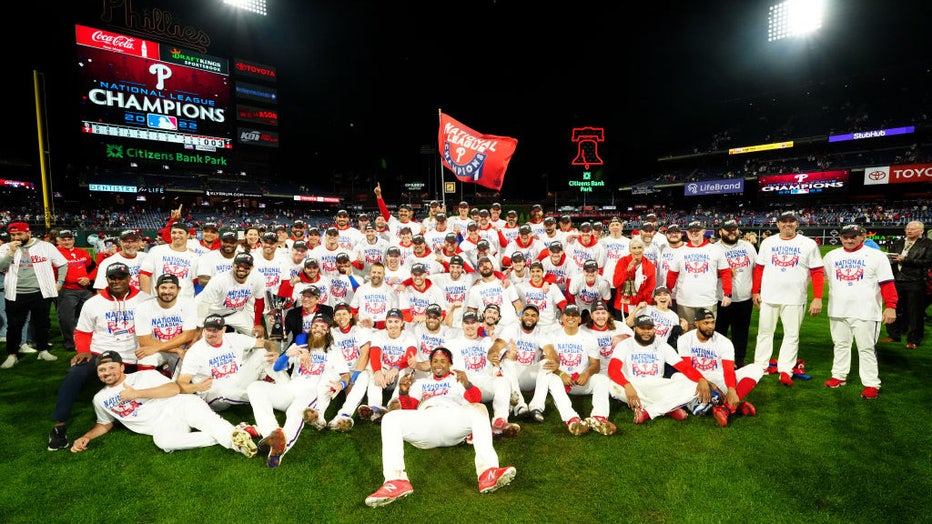 The Philadelphia Phillies pose for a team photo on the mound after winning Game 5 of the NLCS versus the San Diego Padres at Citizens Bank Park on Sunday, October 23, 2022. (Photo by Daniel Shirey/MLB Photos via Getty Images)

RELATED: How much are World Series 2022 tickets, Astros vs Phillies?

Robinson debuted in 1947 with the Brooklyn Dodgers and played in the World Series that year. Since then, the 1950 matchup between the New York Yankees and Phillies has been the only World Series without a Black player.

Houston and Philadelphia will announce their 26-man rosters several hours before Game 1 on Friday night at Minute Maid Park, where Dusty Baker, a Black outfielder for the 1981 champion Los Angeles Dodgers, manages the Astros.

Starting in 1954 when Willie Mays and the New York Giants played against Larry Doby and Cleveland, every single team to reach the World Series had at least one U.S.-born Black player until the 2005 Astros did not.

During that half-century, Black greats such as Hank Aaron, Barry Bonds, Lou Brock, Bob Gibson, Rickey Henderson and Frank Robinson commanded the October stage. In 1979 alone, Willie Stargell and Dave Parker were among 10 Black players on the "We Are Family" Pittsburgh Pirates champions.

For much of that time, baseball was clearly the dominant game in the United States, the national pastime. Over the years, as basketball and football increased in popularity, baseball became more expensive with an emphasis on travel teams and elite showcases.

One of Matthews' sons, Gary Jr., was an All-Star outfielder. Another son works in the commissioner's office with diversity programs.

By 2020, when the Dodgers beat Tampa Bay, Los Angeles star Mookie Betts was the only Black player in the World Series.
At the All-Star Game this summer at Dodger Stadium, Betts wore a T-shirt with the message: "We need more Black people at the stadium."

But on the field this weekend, despite encouraging indicators and multi-layered efforts by MLB, it will be a World Series shutout for the first time in over seven decades.

"It's the exclamation point," said Richard Lapchick, director of The Institute for Diversity and Ethics in Sport at Central Florida.

"It's been a story that's been ongoing since the late 1980s, the decline of Black baseball players," he said.

Lapchick, lead author for his group's annual reports on diversity hiring practices in sports, said Black players made up 7.2% of opening day rosters this year. That dipped from 7.6% last year and marked the lowest since study data was first collected in 1991, when 18% of MLB players were Black.

The Phillies had no Black players on their opening roster this year for the first time since 1959. Roman Quinn, a Black backup outfielder, played 23 games before being released.

Philadelphia power-hitting rookie Darick Hall made his debut in late June and played 41 games — his mother is white and his father is Black and white, and he identifies as multiracial. Hall wasn't on the Phillies' roster for any of the first three rounds this postseason and isn't expected to be on the World Series roster.

Houston lost in the World Series last year with Michael Brantley, a Black outfielder, on the roster. Brantley is out for the season this year because of a shoulder injury. Relief pitcher Josh James is also Black and on the team's 40-man roster, but he had arm surgery in early October.

MLB had 38% players of color on opening day rosters, including Altuve, Yordan Alvarez, Jeremy Peña, Yuli Gurriel, Cristian Javier and Framber Valdez of the Astros and Segura, Ranger Suárez and Seranthony Domínguez of the Phillies.

Many Afro Latino players embrace Black identity, yet perhaps not for the same reasons that Black U.S. players do. Race and skin color hold a different currency in places like the Dominican Republic, Panama, Cuba and Belize.

Kendrick and others see signs of more on the way.

Last summer, for the first time in MLB draft history, four of the first five players selected were Black.

All four, along with more than 300 big leaguers including Harris, Cincinnati's Hunter Greene, Pittsburgh's Ke’Bryan Hayes and Milwaukee's Devin Williams, took part in MLB diversity-based initiatives such as the MLB Youth Academy, DREAM Series and the Reviving Baseball in Inner Cities (RBI) program.

MLB also has pledged $150 million in the next decade to the Players Alliance, an organization of current and former players working to increase Black involvement at all levels of the sport.

"The problem is we’re not patient. I don’t like instant grits. I’m from Georgia — I like mine slow cooked," he said.