A Kentucky hospice nurse arranged for her patient to watch his son play his first football game of the season with the help of a local dentist who owned his own plane.

Jerree Humphrey is a registered nurse and case manager at the the Hospice of Lake Cumberland in Somerset, Kentucky. There, she met Scott Sullivan, 50, a patient diagnosed with a rare and terminal type of cancer called leptomeningeal carcinomatosis.

According to Humphrey, Sullivan was told he only had months to live before he moved into hospice.“He was only given a very short time,” Humphrey, who had been Sullivan’s nurse for about a month, said.

Since Sullivan was told he had little time left, he decided to have a bucket list ready to go, and at the top of his list was his desire to watch his son play football at his season opener.

Cade Sullivan, 17, Scott’s son, was going to have his season opener in Belfry on Sept. 11, which was not close to the hospice, according to Humphrey. 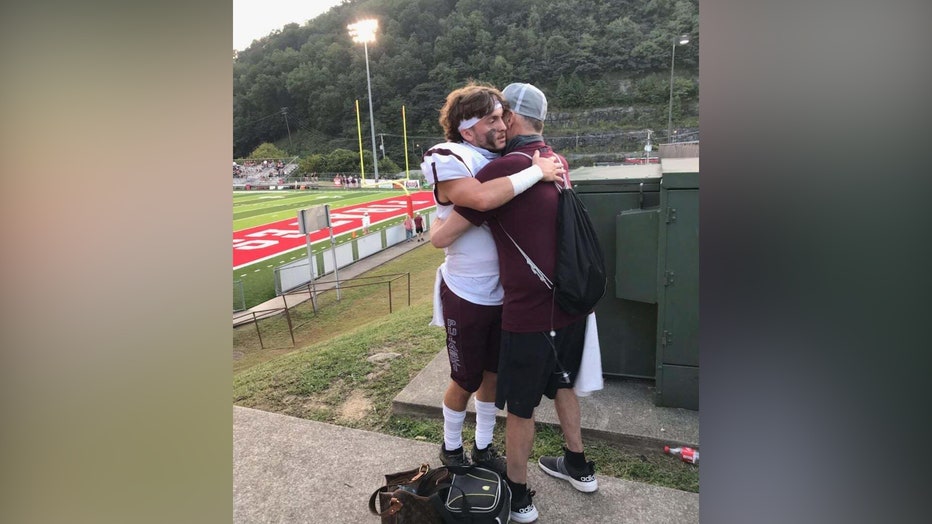 Scott (R) and Cade (L) embrace after he lands at the football game.

”So he said, ‘What do you think about me going,’ and I was like, well I don’t really know because it’s like a three-and-a-half hour car drive, then three-and-a-half hours back, so I thought if it was that far, about a seven or eight hours drive, it really wasn’t feasible, you know. So he kind of laughed and he said, ‘Do you have a helicopter in your backyard?’”

Humphrey said no, but little did Sullivan know, the gears in her head were already turning.

“I finished my visit and I left, so that day I thought, you know, we have enough people in our community, I thought, I wonder if somebody would really be willing to do that?”

That’s where a friend of Humphrey’s who works at the airport came to mind.

“I have a friend, Kellie Baker, fortunately the Lord has put us in each other’s path, and she’s actually the manager at the airport here, so I thought, if anybody would know if somebody would be willing to do that, then it would be her.”

Humphrey rang up her friend and asked Baker to help fulfill her patient’s bucket-list request. 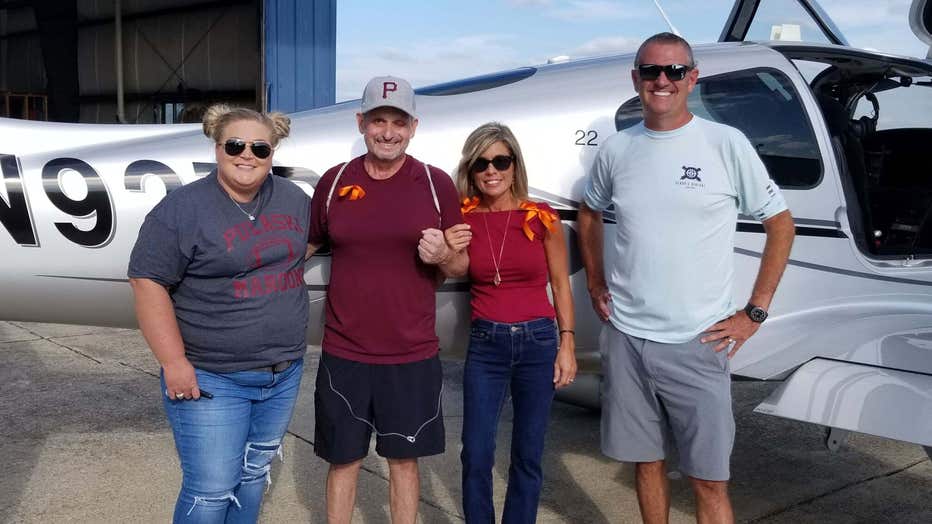 “She was all excited about it, she wanted to help,” Humphrey said. “So she got us in contact with Dr. Denny Brummett.”Brummett owned a small plane and excitedly agreed to help Humphrey with her mission.

“He was more than willing, he was so happy to take us and bring us back. He stayed and watched the game with us. It was just synchronized and he did a great job,” Humphrey said.

“The airport manager is friends with Jerree, I went to high school with her (Humphrey) as well, but we hadn’t been in contact for a long time,” Brummett said. “But they called and mentioned Scott was wanting to go to this game.”

Brummett had been flying since 1998 and owns a small plane he flies from time to time and is even a part of AERObridge, a relief group that flies in supplies to areas hit by natural disasters.

“I was excited to do it, not only to help Scott, but just to get out of the house and go to a game for the first time since all of this quarantine began,” Brummett joked. 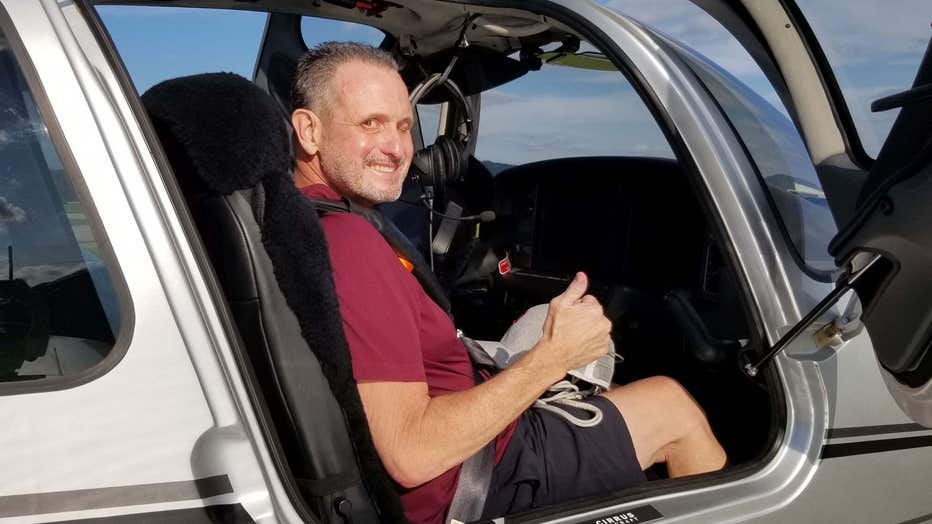 Despite not knowing Sullivan very well, Brummett knew his prognosis wasn’t great and wanted to do what he could to help after having lost his own mother just one year ago.

“We hit it off,” Brummett said of meeting Sullivan for the first time on the day of the flight. “We all had a really great time on the trip.”

Brummett expressed his desire to help Cade and hopefully give him a few lasting memories before he endures what he is preparing to go through.

“Once you been through something like that, you know what somebody is getting ready to experience,” Brummett said. “You know what they’re in for, unfortunately. I think I didn’t do anything that a lot of people weren’t willing to do or able to do, I just had the time and done it.”

And while Brummett was delighted that he and Sullivan hit it off, even exchanging phone numbers and texting back and forth after the football game, he is sobered by the fact he might not be able to speak with him for much longer.

“It’s kind of an odd situation because, people have asked me, well it made you feel really good, well it’s kind of weird,” Brummett said. “Because we kind of hit it off, so it’s meeting a friend for the first time and knowing that their life is just short. It’s a bad deal, I hate it for him.”

Having kids of his own who play sports, Brummett said he just could not imagine what Sullivan is going through.

“I have three kids and they all play sports and I just can’t imagine thinking it was your last time to see your child play football or soccer or whatever sport it is,” Brummett said. “It makes you really look back on it and really want to enjoy every time you get with them.”

Once Humphrey got the transportation secured, it was time to tell Sullivan the news.

Sullivan was excited he would get to watch his son’s season opener, but Humphrey was almost equally as excited.

Not only did she orchestrate the plan, but her bosses and colleagues were on board and willing to help with whatever she needed.

“My bosses and stuff, whenever I was like, well I kind of reached out to my friend at the airport, well then they were like, well, regardless, we want to make it happen,” Humphrey continued. “Once I did get it out there that I wanted to do it, then it was like everyone was willing to help.”

Humphrey recalled the planning part of her entire operation took between three to four days.

“Whenever I decided to ask, I thought, all they can do is say no,” Humphrey said, and that can-do attitude got her to fulfill her patient’s bucket list wish.

“Everybody was praying for us — good weather and good health,” Humphrey said. “All the ladies at work, all the other nurses, they were excited. Everybody wanted him to be able to go.” 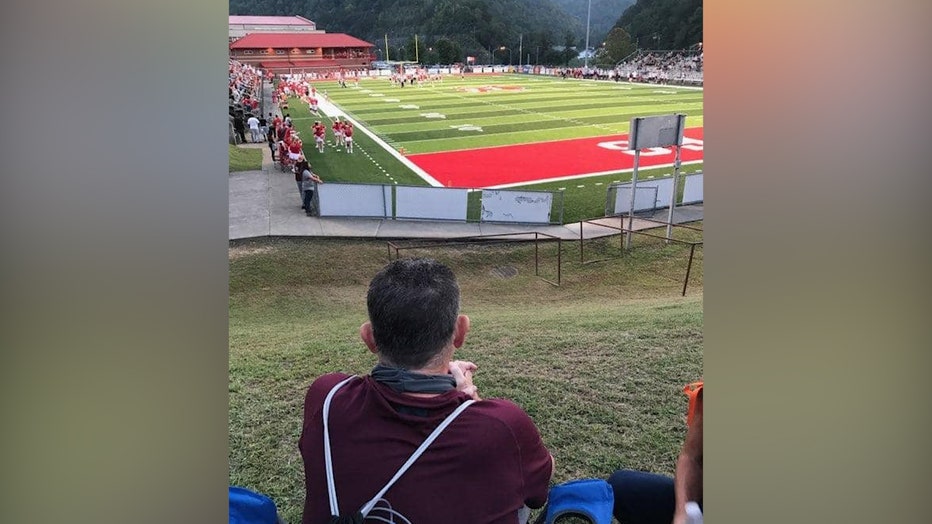 Humphrey accompanied Sullivan to his son’s football game to ensure he stayed a good distance away from game-goers and in the event that he needed medical attention. Fortunately, everything went perfectly.

Humphrey said she was so happy to be able to make this happen for Sullivan.

“It was really cool, it was so cool to just see him and Cade be there together and his son be so excited and him, be so excited to watch,” Humphrey recalled, wiping away tears.

“That day, whenever we went, we came around the clubhouse at the football field, and his son run up that hill to give him a hug, I mean, it was just like the sweetest thing ever, you couldn’t help but cry,” Humphrey recalled, holding back tears.

“They’re best buddies,” Humphrey said of Sullivan and his son. “He (Cade) looks for him (Scott) to be there. It was so awesome that he got to be there.”

Kelly Hayes contributed to this report.