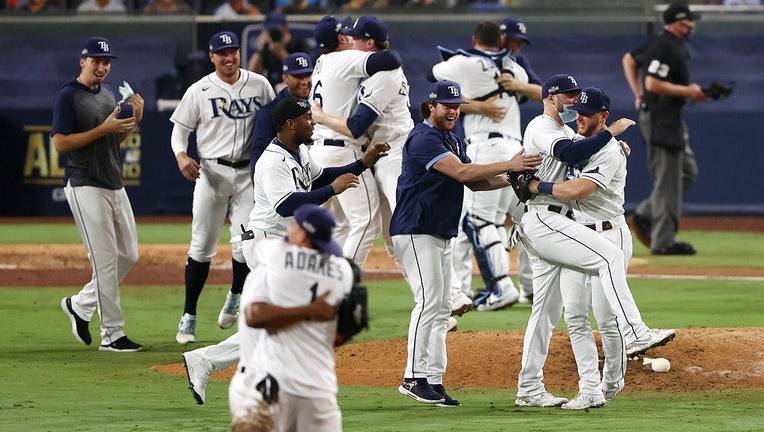 Members of the Tampa Bay Rays celebrate a 4-2 win against the Houston Astros to win the series in Game Seven of the American League Championship Series at PETCO Park on October 17, 2020 in San Diego, California. (Photo by Ezra Shaw/Getty Images)

The Rays will face either the Los Angeles Dodgers or Atlanta Braves in the World Series in Arlington, Texas, starting Tuesday night. Game 7 of the NLCS is Sunday night.

Tampa Bay's only other World Series appearance was in 2008, when it lost to the Philadelphia Phillies.

The innovative Rays led the AL with a 40-20 record in the pandemic-shortened season. Known for their pitching and defense, they also introduced the concept of the starter and sometimes deploy a four-man outfield.

Tampa Bay snapped a three-game losing streak and prevented the Astros from matching the 2004 Boston Red Sox, the only major league team to rally from a 3-0 deficit to win a seven-game series.

The Rays also kept the Astros from becoming the first team to win a pennant with a losing regular-season record (29-31).

The loss ended Houston's first season since its sign-stealing scandal was revealed. The Astros were viewed by many fans as villains for their role in the cheating scandal en route to the 2017 title against the Dodgers.

Mike Zunino homered and drove in two runs for the Rays, who avoided the ignominy of joining the 2004 New York Yankees, who took a 3-0 lead in the ALCS and lost four straight to the Red Sox. Boston went on to win its first World Series in 86 seasons. 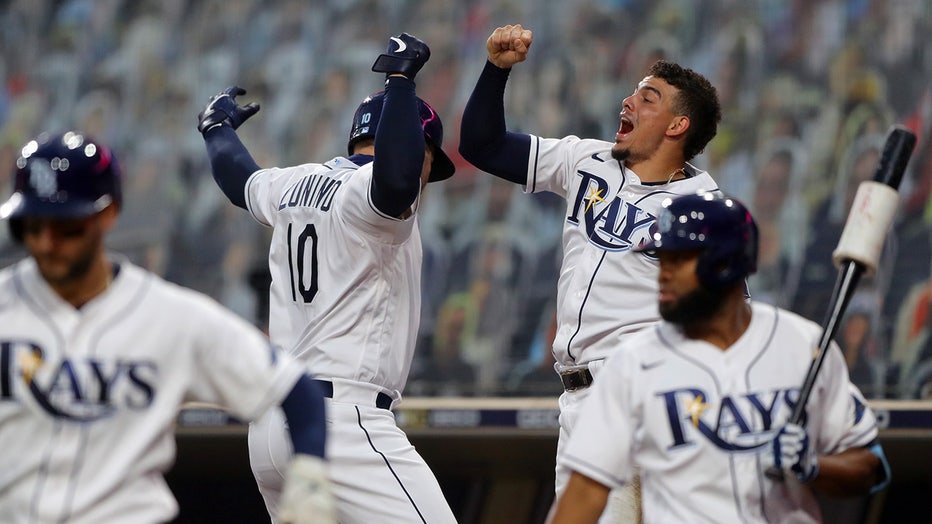 Mike Zunino celebrates with teammate Willy Adames after hitting a home run in the second inning during Game 7 of the ALCS. (Photo by Alex Trautwig/MLB Photos via Getty Images)

Arozarena, relatively unknown before these playoffs, set a rookie record with his seventh homer of the postseason. His 21 hits are one shy Derek Jeter's 1996 rookie postseason record.

Nicknamed "The Cuban Rocket," the 25-year-old Arozarena drove a 1-1 sinker from Lance McCullers Jr. to right-center field at Petco Park with one out in the first for a two-run homer. 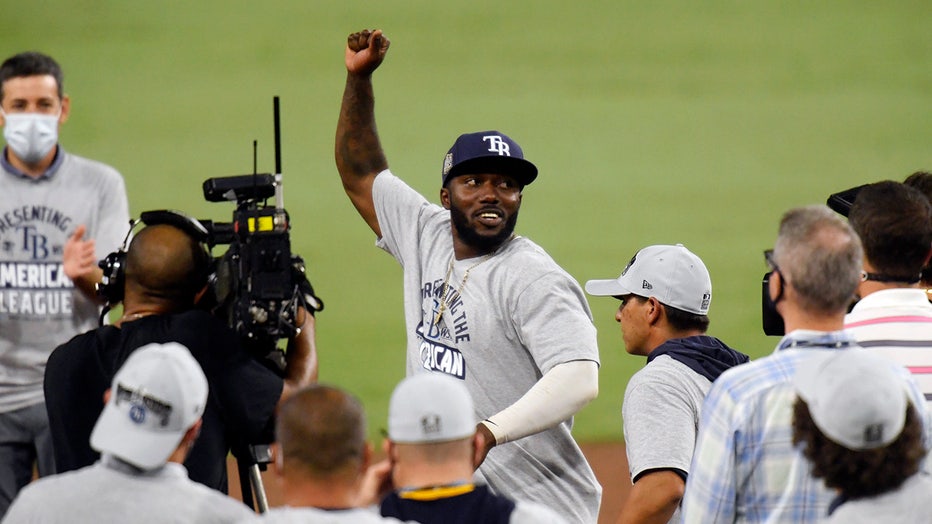 Manuel Margot, who played with the San Diego Padres from late in the 2016 season until being traded to Tampa Bay in the offseason, was aboard after getting hit with a pitch.

Arozarena defected from Cuba to Mexico in 2015, signed with the St. Louis Cardinals in 2016 and made his big league debut last year. Traded to Tampa Bay in the offseason, he tested positive for COVID-19 before summer camp and didn't make his 2020 debut until Aug. 30.

Until he started showing his October power, Arozarena was best known for a gaffe he committed while with the St. Louis Cardinals last postseason. After the Cardinals beat Atlanta in the NL Division Series, he posted manager Mike Schildt's profane clubhouse rant to social media, not realizing it would get a negative reaction. 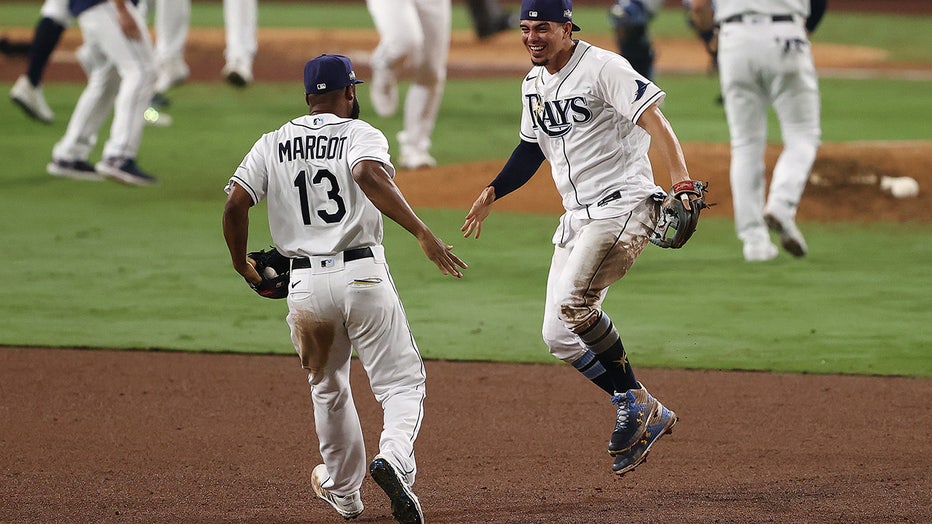 Morton held the Astros to two hits in 5 2/3 scoreless innings while striking out six and walking one. He retired 14 straight batters until walking Martin Maldonado with one out in the sixth. George Springer forced Maldonado and took third on Jose Altuve's two-out infield single, and manager Kevin Cash pulled Morton after just 66 pitches. Nick Anderson came on and retired Michael Brantley.

Morton is the first major leaguer to earn the victory in four winner-take-all games, including Game 7 of the 2017 World Series and Game 7 of the 2017 ALCS against the Yankees when he was with Houston. He signed with Tampa Bay as a free agent before the 2019 season and won the wild card game at Oakland last year. The Rays were then eliminated by the Astros in the ALDS.

The Astros broke through against the Rays' bullpen in the eighth. Carlos Correa hit a two-run single off Pete Fairbanks before the reliever struck out Alex Bregman on a 100 mph fastball.

Fairbanks worked around a one-out single in the ninth to close it.

McCullers Jr. lasted only 3 2/3 innings. He allowed three runs and four hits, struck out seven and walked one.

Morton and McCullers became the first pair to pitch in the same winner-take-all postseason game as teammates and later start against each other in a winner-take-all game. In the decisive Game 7 of the 2017 World Series, McCullers started and went 2 1/3 scoreless innings while Morton pitched the final four innings for the victory.

Zunino hit a solo shot into the second deck in left off McCullers with one out in the second and added a sacrifice fly in the sixth. On Friday night, he snapped his bat over his knee in frustration after striking out on three pitches. 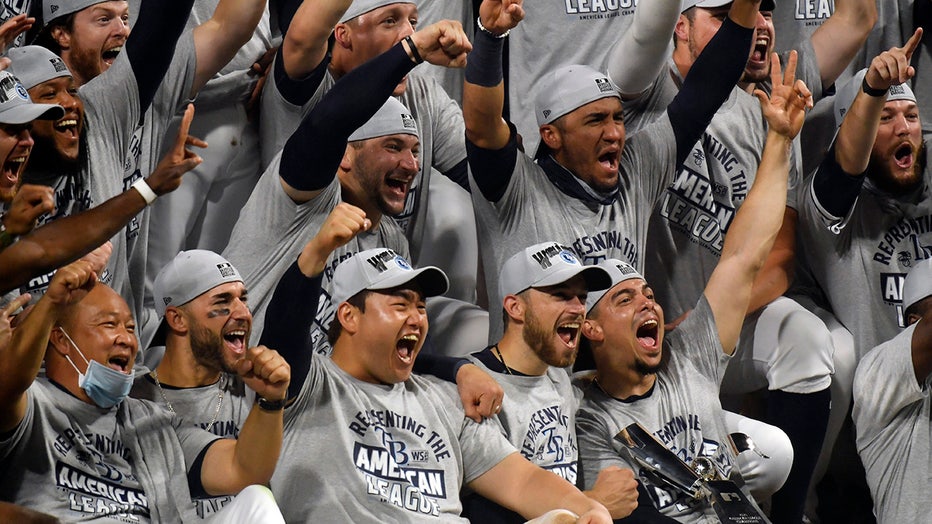 Members of the Tampa Bay Rays pose with the William Harridge Trophy after defeating the Houston Astros in Game Seven of the American League Championship Series at PETCO Park on October 17, 2020 in San Diego, California. (Photo by Harry How/Getty Imag

Arozarena is only one homer away from matching the major league record of eight homers in any single postseason. Barry Bonds set the mark for San Francisco in 2002, and it was tied by Houston's Carlos Beltran in 2004 and Texas' Nelson Cruz in 2011. Arozarena is only the ninth player ever to homer seven times in a single postseason, all of them occurring since 1995 in the wild card era.

Rays: Three-time Gold Glove Award-winning CF Kevin Kiermaier was back in the lineup. He missed three starts after being hit with a pitch on the left hand in Game 3.