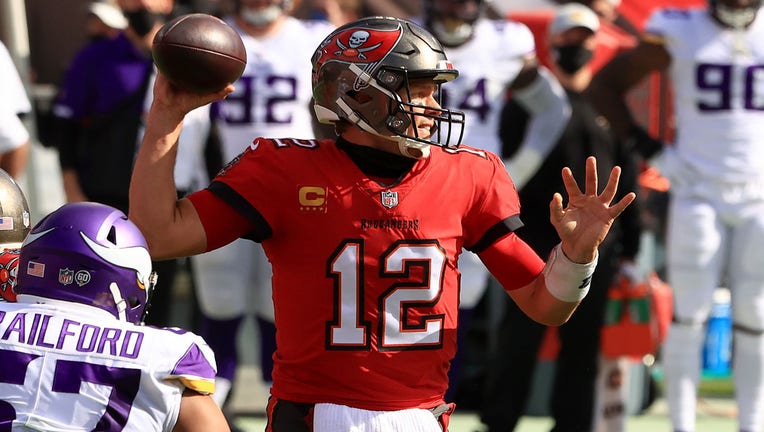 TAMPA, Fla. - Tom Brady threw for 196 yards and two touchdowns on Sunday, helping the Tampa Bay Buccaneers bolster their playoff hopes with a 26-14 victory over the Minnesota Vikings.

The Bucs (8-5) lost three of four games to division title contenders leading into last week’s bye, including a pair of 27-24 losses at home to the Rams and reigning Super Bowl champion Chiefs. They entered Sunday holding the sixth playoff spot in the NFC, with the Vikings (6-7) nipping at their heels after winning five of six following a 1-5 start.

Tampa Bay sacked Kirk Cousins six times, the last producing a fumble that ended any chance of a rally in the closing minutes. Cousins finished 24 of 37 passing for 225 yards, one touchdown and no interceptions. Dalvin Cook rushed for 102 yards on 22 carries, but Minnesota's chances were undermined by another poor performance by kicker Dan Bailey, who missed an extra point and three field goals.

Slow starts hindered the Bucs in those losses to the Rams and Chiefs. This time, Brady shrugged off a scoreless opening quarter with help from Bailey and a trio of costly of penalties on the Vikings' defense. Minnesota was flagged for pass interference in the end zone twice to set up Jones’ touchdown run and Succop’s 18-yard field goal on the final play of the first half.

Miller’s long TD catch wiped out the 6-0 lead the Vikings took on Cook’s 14th touchdown rushing. Jones’ TD finished a drive aided by a penalty on Minnesota safety Harrison Smith for lowering his helmet to initiate contact on a tackle, and a flag thrown against cornerback Jeff Gladney for interfering with receiver Mike Evans in the end zone.

Gronkowski’s TD in the third quarter increased Tampa Bay’s lead to 23-6. Cousins trimmed Minnesota’s deficit to 23-14 with a 14-yard scoring pass to Irv Smith Jr. and a 2-point conversion throw to Justin Jefferson. That was as close as the Vikings could get.

Brady was 15 of 23 without an interception. He improved to 15-4 in 19 regular-season starts following a bye.

Buccaneers: CB Jamel Dean (groin) was inactive. The Buccaneers didn’t announce any injuries during the game.

Buccaneers: travel to Atlanta for the first of two meetings with the NFC South-rival Falcons over final three weeks of the season.