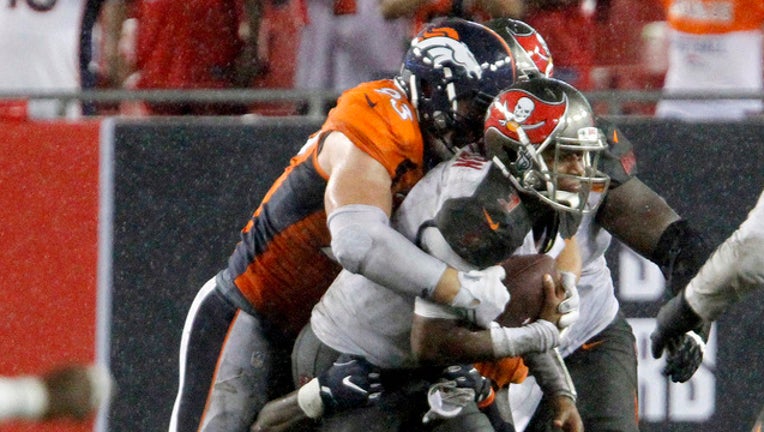 Jameis Winston is sacked by Jared Crick #93 of the Denver Broncos late during the fourth quarter at Raymond James Stadium on October 2, 2016 in Tampa, Florida. (Photo by Joseph Garnett Jr. /Getty Images)

Siemian has been one of the best feel-good stories of this young season, leading the defending Super Bowl champions to a promising start following the retirement of Peyton Manning.

Lynch, drafted in the first round to be a big part of Denver's future, added a nice first chapter to his career by finishing a 27-7 victory over the Tampa Bay Buccaneers.

The rookie played high school ball in Deltona, Florida, about two hours east of Tampa, then starred at the University of Memphis.

"It was definitely exciting to come back here and have a lot of family and friends here to see it happen," Lynch said. "I'm glad that they were here for it and I'm also glad I got the opportunity, too. But to come in in that kind of circumstance, Trevor gets hurt, you never want that to happen."

Siemian left the game with two minutes remaining in the first half with what the Broncos described as an injury to his non-throwing shoulder. He remained in uniform and watched the second half from the sideline while Lynch, the 26th pick in the draft, finished the Broncos' ninth consecutive win.

Coach Gary Kubiak said Siemian probably could have re-entered the game if needed.

"Was getting ready to back up if I had to if something happened to Paxton but fortunately he did a heck of a job," Siemian said, adding he was a "little sore," but hopeful of playing next week at home against Atlanta.

"I think I'm just going to take it one day at a time," Siemian said. "But that's the plan, to be ready to play."

Siemien threw a touchdown pass to Demaryius Thomas, capitalizing on Aqib Talib's interception and 25-yard return to the Bucs 11 on Tampa Bay's opening possession. The ex-Buc cornerback also set up another first-half TD with a second interception that led to C.J. Anderson's 1-yard run for a 14-7 lead.

For the second straight week, play was stopped in the fourth quarter at Raymond James Stadium because of inclement weather. The game was suspended for 1 hour, 26 minutes with 6:52 remaining Sunday, with only a few thousand fans returning to their seats for the conclusion.

Jameis Winston scrambled 7 yards for a touchdown in the first quarter, but had limited success against the Denver defense the rest of the way. In addition to throwing two interceptions, the second-year quarterback was sacked five times while going 17 of 35 for 179 yards.

The Bucs (1-3) have lost three straight, and coach Dirk Koetter he was "very concerned" about the play of Winston.

"He's not regressing. He's got to take care of the football," Koetter said. "You can't turn it over three times in a half. ... You're not going to win games like that."

A week after becoming the first player in league history with 300 passing yards, four TD passes and zero interceptions in his first career road start, Siemian was off to another solid start when he was sacked by Bucs defensive tackle Clinton McDonald, who slung the Broncos quarterback to the turf on his left shoulder for an 8-yard loss late in the second quarter. Siemian left the field on his power and later received a ride to the locker room on a cart.

Denver (4-0) punted after Lynch threw an incompletion on third down coming out of the two-minute warning. The rookie got one more crack at the Bucs defense before halftime, going 4 of 8 for 47 yards to move his team into position for a 38-yard field goal that made it 17-7.

The Broncos set the tone for a frustrating second half for the Bucs, methodically moving 69 yards in 16 plays for a field goal that increased the lead to 13. Lynch's 5-yard TD pass to Emmanuel Sanders, who had eight receptions for 88 yards, made it 27-7 in the fourth quarter.

Siemian was 5 of 7 for 68 yards, including an 11-yard TD pass to Sanders on Denver's first offensive play. Lynch finished 14 of 24 for 170 yards, one TD and no interceptions. Anderson had 49 yards rushing on 19 carries.

Talib faced his former team for the second time, first in Tampa. He was a first-round draft pick of the Bucs in 2008 and spent four-plus years with the team before being traded to New England in the middle of the 2012 season. His 33 interceptions are the most by a cornerback since the ninth-year pro entered the league. The first 16 came with Tampa Bay.

The Broncos are 4-0 for the second straight season and third time in four years. Their nine-game winning streak is the longest in the NFL and they've now won a league-best 26 consecutive games when they've won the turnover battle.

The Buccaneers had four sacks — 1 ½ by McDonald, after not getting much pressure on opposing quarterbacks the previous two weeks against Arizona and Los Angeles. Siemian was sacked three times before leaving the game.