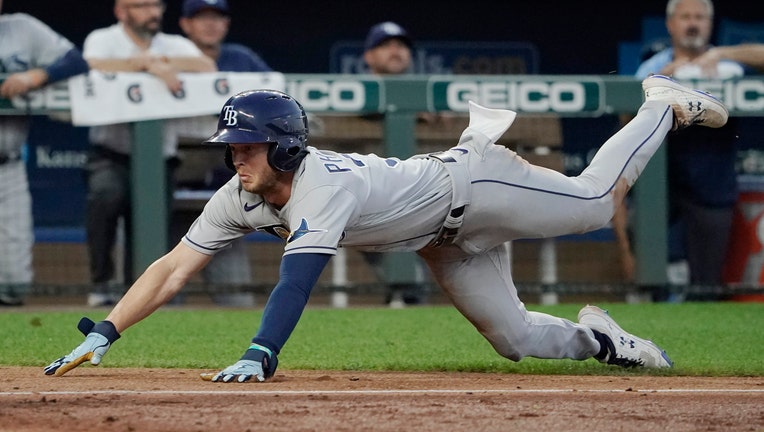 KANSAS CITY, MISSOURI - JULY 22: Brett Phillips #35 of the Tampa Bay Rays dives into home to score on a Yandy Diaz three-run double in the fourth inning against the Kansas City Royals at Kauffman Stadium on July 22, 2022 in Kansas City, Missouri. (Ph

Dozier snapped a 2-all tie with two outs in the seventh when he singled off Brooks Raley (1-1) to score Whit Merrifield. Melendez added an insurance run with a double down the left-field line in the eighth.

The Royals overcame the loss of Bobby Witt Jr. for their first series win against the Rays since 2017. They broke an 11-series losing streak to the American League East.

Bubic (2-6) tied with a season high by pitching seven innings. He gave up two runs on four hits, walked three and struck out four.

For the second straight game, the Royals lost a lead but found some timely hits late to prevail.

Witt hit an RBI single in the first inning, but exited the game before the next half-inning even started. The 22-year-old rookie stole second but then gingerly ran to third on a fly ball to center field and was removed with right hamstring tightness. He is considered day-to-day.

Nick Pratto made it 2-0 in the second with a sacrifice fly to center field that scored Michael A. Taylor.

Tampa Bay responded, as Yandy Diaz hit a 434-foot homer to center field for his first since May 14. The Rays tied the game in the sixth on a sac fly by Luke Raley.

Taylor Clarke got his second save of the season.