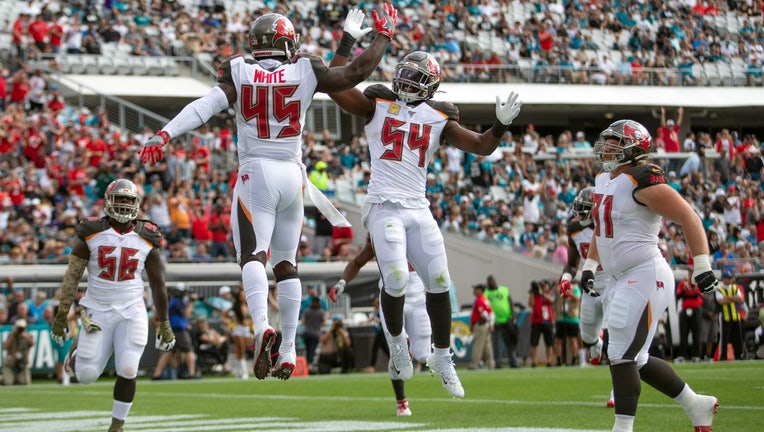 JACKSONVILLE, Fla. - Nick Foles, Doug Marrone and the Jacksonville Jaguars reached a new low in their first home game in more than a month.

Foles ended his first three drives with turnovers that Tampa Bay turned into touchdowns, costly mistakes that propelled the Buccaneers to a 28-11 victory over the Jaguars on Sunday.

It was Jacksonville's fourth consecutive loss by at least 17 points and could mean the end of Marrone's tenure with the team. At the very least, the skid will have owner Shad Khan considering changes over the final month of the season.

Marrone, meanwhile, has to decide what to do at quarterback. He benched Foles at halftime, switching back to rookie sensation Gardner Minshew.

A sixth-round draft pick from Washington State, Minshew started eight games while Foles recovered from a broken left collarbone and gave the Jaguars (4-8) a chance nearly every week. Foles, the 2018 Super Bowl MVP who signed a four-year, $88 million contract in free agency, never looked comfortable in his three games since coming off injured reserve.

He was downright awful against the Buccaneers (5-7), who have won two straight for the first time in coach Bruce Arians' first season.

Foles completed 7 of 14 passes for 93 yards, with two fumbles and an interception. He also was sacked three times.

The Bucs capitalized on each of Foles' miscues.

He fumbled again on the team’s third drive, this time in the red zone. Carl Nassib

Minshew completed 16 of 27 passes for 147 yards, with a touchdown, an interception and a fumble in the final minutes.

Jameis Winston was 21 of 33 for 268 yards and didn’t throw an interception for the first time in a month.

Buccaneers: Cornerback Jamel Dean left in the first half with a shoulder injury and was later ruled out. Guard Alex Cappa left with an elbow injury.

Jaguars: Linebacker Myles Jack missed the first game of his four-year NFL career, forcing Donald Payne into the starting lineup. Cornerback D.J. Hayden left in the third quarter with a neck injury. Defensive end Josh Allen, who broke the franchise’s rookie record with his eighth sack, left to be evaluated for a concussion.