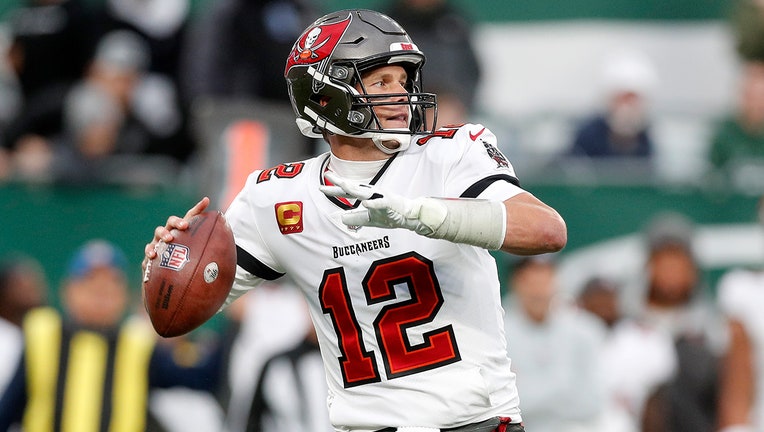 TAMPA, Fla. - While it would be nice to get Tom Brady and Tampa Bay’s other healthy starters some rest, coach Bruce Arians isn’t counting on it when the defending Super Bowl champions close the regular season against the Carolina Panthers.

The Bucs (12-4) have already won the NFC South and matched a franchise record for regular-season wins. However, there’s still plenty to play for Sunday with Brady and Co. looking to stay in the running for a No. 2 playoff seeding.

"Oh, I would hope that would happen. ... It happened three times this year, but the thing is, who do you take out? Because you can’t take them all out," the Bucs coach said. "You only dress 47 (players). You can’t have all of your second string go in because there’s not enough of them. It’s a time when this guy is a little nicked up and get him out of there."

"I hope that would happen, but I don’t anticipate it."

The Bucs currently hold the No. 3 seed in the NFC. A victory, combined with a loss by the Los Angeles Rams, would propel Tampa Bay into the No. 2 spot.

That would ensure the reigning Super Bowl champs a second home game if they win their playoff opener next week.

"You play to get that second seed, that’s huge," Arians said. "We’re not resting anybody. We’re playing to win."

The Bucs spent the early part of the week answering questions about Antonio Brown’s bizarre exit from last week’s come-from-behind win over the New York Jets.

Brown alleged Arians cut him after he refused to re-enter the game because of an ankle injury. Arians said Brown was upset that he wasn’t having enough passes thrown to him.

The coach reiterated the defending champs are focused on taking care of business against the Panthers.

"Our team is great. Our team knows the truth. They know what happened," Arians said. "Our guys are fine. They are ready to play Carolina."

RELATED: 'Get the F out of here:' Buccaneers officially terminate Antonio Brown's contract

The Buccaneers saw the Panthers rotate quarterbacks two weeks ago in their 32-6 rout of Carolina in Charlotte as Cam Newton and Sam Darnold split reps.

But Darnold is expected to get his second straight start since returning from a shoulder injury and handle the large majority of reps in Sunday’s rematch. Newton could see some action in short-yardage and goal-line situations in what could be his final game with the Panthers. The 2015 league MVP saw limited action last week against the Saints, running one time for 5 yards. He did not attempt a pass.

Darnold, who is 4-6 as the team’s starter, is under contract for more than $18 million next season, while Newton is an unrestricted free agent.

Neither Carolina quarterback had much success against the Bucs in the last meeting as they were sacked a combined seven times.

The Panthers also allowed seven sacks in a loss last week to the Saints, and over the past three games have surrendered 18 sacks. For the season, the Panthers have allowed 50 sacks, fourth-most in the league behind only the Baltimore Ravens (54), Chicago Bears (51) and Cincinnati Bengals (51).

Coach Matt Rhule said this week it is time for the Panthers to make a "true investment" in the offensive line.

Bucs WR Mike Evans is the only player in NFL history to begin a career with seven consecutive seasons with at least 1,000 yards receiving. He’s 54 yards shy of extending the record to eight.

Hall of Famer Randy Moss is the only other receiver to start with at least six straight 1,000-yard seasons.

The Panthers have been eliminated from playoff contention. They currently hold the sixth spot in the 2022 NFL draft, but could move up to fifth with a loss Sunday and the New York Giants beat Washington.