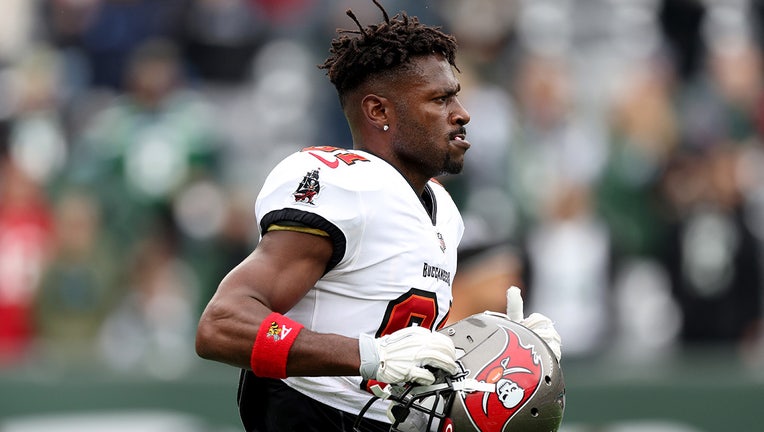 Antonio Brown looks on against the New York Jets during the game at MetLife Stadium on January 02, 2022 in East Rutherford, New Jersey. (Photo by Elsa/Getty Images)

TAMPA, Fla. - The Buccaneers were the only team in the NFL willing to risk signing Antonio Brown last year. In fact, Bruce Arians didn't want Brown initially until Tom Brady convinced the Bucs to sign the receiver with a questionable past.

Brady took full responsibility for Brown, even letting him Brown live with him for a few weeks. So how hurt is Brady after all he's done for him?

"I think there’s a lot of personal feelings, obviously," Brady said Thursday after the team officially released the temperamental receiver. "I don’t think this is really the week to discuss it though. I’m just going to do the best I can do as the quarterback of the team, try to put together a great week and finish strong. You just always deal with different things over the course of the season and that’s what we’re doing this week."

RELATED: 'Get the F out of here:' Buccaneers officially terminate Antonio Brown's contract

Arians also put his reputation on the line, going back on his word of "one mistake and he's gone." Despite heavy criticism, Arians welcomed Brown back after a three-game suspension for misrepresenting his status with a fake COVID card.

Arians is equally hurt for standing behind Brown.

"Yeah, I’m hurt, but I just still wish the best for him," the coach said. "Just get the help you need."

RELATED: Antonio Brown says he needs surgery after 'pressure directly from my coach to play injured'

The Antonio Brown situation pales in comparison to the distraction created with "Deflategate" with the New England Patriots back in 2015. After 22 years in the NFL, Brady has learned to deal with off-the-field issues. He admits he's no stranger to them.

"I’ve had lots of different things over a period of time," he offered. "I think what you’ve always got to think of is that the work is ahead of us. The more you think about things that have happened a year ago, five years ago, it just takes away from what we’re trying to do this week. The best you can focus on [is] the job you have to do – and I know what I have to do. The team obviously counts on me to do a good job with what I’m doing. The more I can focus on that, the better it is. That’s what I’ve tried to do this week, that’s what I tried to do last week, that’s what I tried to do the week before. I owe that to my teammates, my coaches and my family. I just want to go out there and do a great job."

The drama of Brown's exit along with loss of his talent is a lot for this team to handle heading into the most critical stretch of the season.