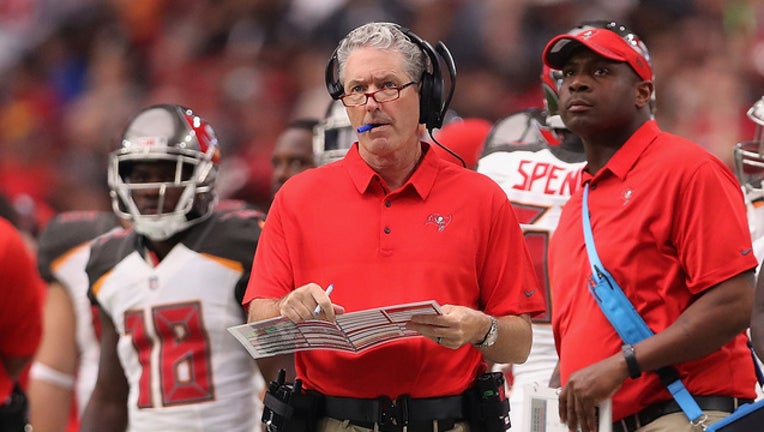 Head coach Dirk Koetter of the Tampa Bay Buccaneers reacts during the first half of the NFL game against the Arizona Cardinals. (Photo by Christian Petersen/Getty Images)

TAMPA (AP) - Despite winning just five games and missing the playoffs for the 10th consecutive season, the Tampa Bay Buccaneers feel they're progressing under Dirk Koetter.

Koetter is the coach the Bucs are betting on to help quarterback Jameis Winston realize his potential in 2018. That's a bit of a surprise considering ownership's lack of patience with predecessors hired to change the team's fortunes.

The Bucs have made four coaching changes during a decade-long playoff drought. Raheem Morris was fired after three seasons, while Greg Schiano and Lovie Smith exited with losing records after two years.

The Glazer family met last week with general manager Jason Licht, who informed Koetter two days before a 31-24 season-ending victory over New Orleans that the coach would retain his job despite the Bucs (5-11) taking a step back after going 9-7 in 2016.

"Again, I am very appreciative of the Glazer family. They are going to give me and my staff the opportunity to come back and fix the things that we didn't do good enough this year ... and I do think it took courage," Koetter said.

"I'm sure plenty of people are surprised by this, but I appreciate the opportunity, and we are going to do our best to fix it."

The Glazers are sticking with Koetter despite rumors about of a possible rift between the coach and Winston, the No. 1 overall pick in the 2015 draft.

The 23-year-old quarterback missed three games with a shoulder sprain that also hampered Winston during a four-week stretch in which he tried to play through the injury.

Winston returned to the lineup in December and played well down the stretch.

The third-year pro denied his relationship with Koetter had deteriorated and that he's happy the coach will get a chance to build on the progress the Bucs have made.

"He truly deserves that. You could just see this locker room and how we kept fighting for him," Winston said. "Our coach comes to work every single day, and he is so consistent. His message is always the same. He expects a lot from us and he holds us accountable."

Takeaways from a disappointing season:

INCONSISTENCY: In addition to stopping a five-game losing streak, the Bucs avoided going winless in the NFC South by beating the division champion Saints to close the season. The team lost 10 of 13 after a 2-1 start, including five of six down the stretch. They went 3-7 in games decided by a touchdown or less.

While injuries were a factor, red zone scoring difficulties, as well as the absence of a consistent pass rush and productive running game, held them back, too.

"Score more points -- that is one issue," Koetter said. "The No. 2 biggest issue is we can't get pressure with a four-man rush. I'm not telling anybody any big secrets here. Those were our two biggest things that need to be addressed."

WINSTON'S GROWTH: With 11,636 passing yards, Winston has thrown for more yards than any player in his first three NFL seasons except Andrew Luck (12,957) and Peyton Manning (12,287). He remains a turnover machine, though. He threw for 19 TDs this season, giving him 69 in his career, but he also had 11 interceptions and lost 10 fumbles in 13 games.

"Turnovers are the No. 1 thing that get you beat. ... Jameis knows that," Koetter said. "It's definitely something that has to be corrected."

"Let me tell you something: When we're healthy, we can beat the heck out of anybody. ... This offense works," Winston said.

QUITE A START: With five catches for 55 yards in the finale, WR Mike Evans joined A.J. Green and Randy Moss as the only players in league history to begin their careers with four consecutive seasons with 1,000 yards receiving. He finished with 71 receptions for 1,001 yards and five TDs.

MOVING FORWARD: Change is inevitable, however don't anticipate a massive overhaul for next season. Koetter stands by his assertion during training camp that the Bucs are talented enough to win consistently. He has no intentions to stop calling offensive plays, and there's no indication that defensive coordinator Mike Smith is on his way out.

"I'll stand by my comment that it is the most talent that we have had," Koetter said. "Getting that talent to score enough points and rush the passer enough is what we didn't do."