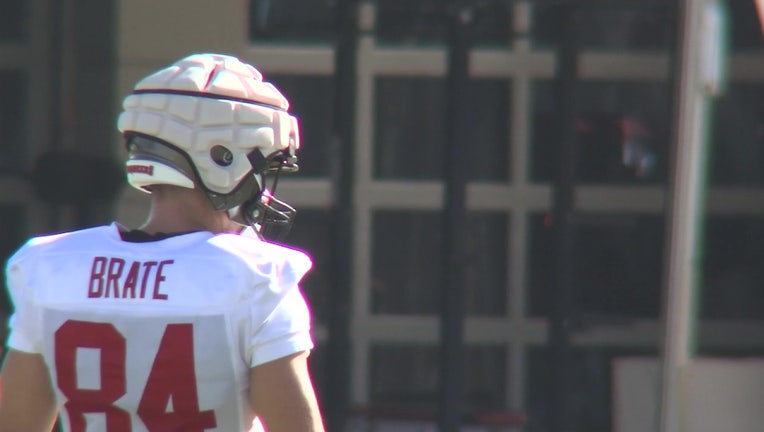 TAMPA, Fla. - Cam Brate is entering his ninth season with the Tampa Bay Buccaneers, and for the first time in his career, he's the team's No. 1 tight end. In fact, he's only made four starts in his last two seasons.

"I think that’s a little bit harder of a role," said Brate. "When you’re not playing all the time, and you’re kind of just thrown out there on third down and got to beat man coverage and stuff. After having that experience, now where I’ll probably be used more a little bit on early downs, I love that – kind of get into the rhythm of the game. [I’m] excited for that challenge and looking forward to it."

Bucs Head Coach Todd Bowles said he's please with Brate and everything he's done, saying he brings a lot to the team on and off the field.

Brate comes to camp feeling fresh, and physically, it's the healthiest he's felt in six years.

"It's frustrating when every off season your hurt, you can't really focus on your training," said Brate. "It's more about recovering than it's actually improving on as a player. To have the whole off season this year to focus on my body, focus on my game. I think it's paid huge dividends for me. I'm still feeling great. They're taking care of me a little bit this year, which has been really nice. Hopefully knock on wood, keep it that way."

For Brate, not having Rob Gronkowski as a teammate is bittersweet. In the two years that Gronk was with the Bucs, Brate learned a lot from arguably the greatest tight end to play the game, and he feels he's a better player because of it.

"With Gronk, it was all learning by watching him, not really by listening to him," joked Brate. "He doesn't always do a good job of explaining how he sees the game and stuff, but I mean, he’s probably the best tight end to ever play. So, just seeing the way he went about his business every day, the kind of unique way he sees the game, definitely benefited me a ton."

Despite his career role as a No. 2, Brate has been a touchdown machine. He tied Kevin House last season for the third most receiving touchdowns in franchise history. He's putting in the work to make sure his run blocking is on par with his pass catching.

"The last couple years just technically work on the run game stuff," said Brate. "It's kind of been a point of emphasis. Just trying to improve everyday on that. Looking to take steps forward in that regard."