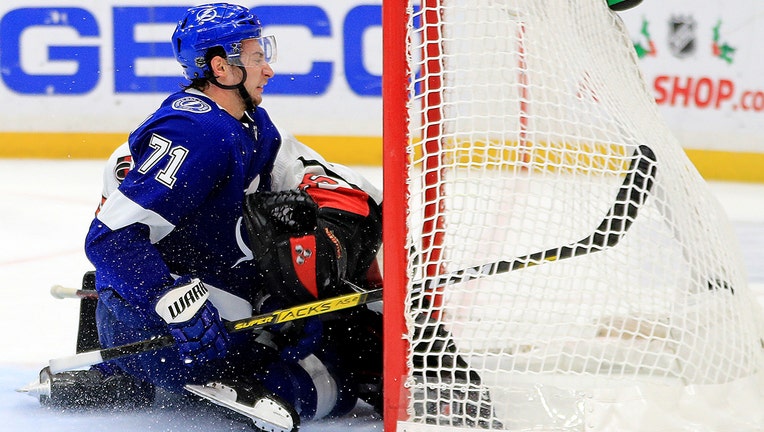 TAMPA, FLORIDA - DECEMBER 17: Anthony Cirelli #71 of the Tampa Bay Lightning scores the game winning goal in overtime on Marcus Hogberg #35 of the Ottawa Senators during a game at Amalie Arena on December 17, 2019 in Tampa, Florida. (Mike Ehrmann/Getty Images / Getty Images)

Cirelli split two defenders near the blue line and lifted a shot past Marcus Hogberg.

Tampa Bay also got goals from Nikita Kucherov, Cedric Paquette and Brayden Point, and Andrei Vasilevskiy made 25 saves. The Lightning were looking to rebound following a 5-2 loss to NHL-leading Washington on Saturday night.

Mark Borowiecki, Connor Brown and Anthony Duclair scored for the Senators, who were coming off a 6-1 loss Monday night at Florida. Hogberg, playing in his third game this season and seventh overall, stopped 36 shots.

Duclair got his ninth goal over the last seven games on a breakaway after Kucherov's turnover as the Senators tied it at 3-3 at 15:46 of the second.

Kucherov, in the lineup after leaving Saturday's game midway through the second after taking a shot off his right foot, spent the third period sitting on the bench.

Hogberg made several strong saves during the first half of the third before the Senators' NHL lowest-ranked power play failed to score while Tampa Bay star Steven Stamkos served 4 minutes for high-sticking at 9:51.

Kucherov opened the scoring 7:27 into the game from the high slot. Hogberg lost his stick while moving to his right to try and stop Victor Hedman's in-close shot and was scrambling to get back in position as the Lightning right wing got his 199th career goal.

Point scored at 3:32 of the second but Brown got the goal back 29 seconds later.