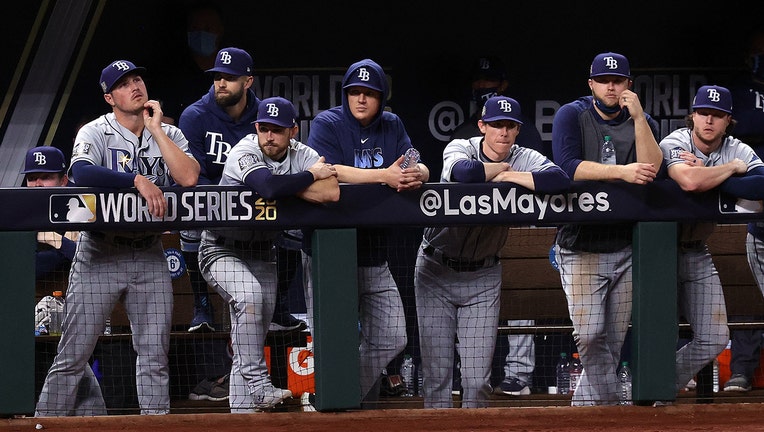 The Tampa Bay Rays look on against the Los Angeles Dodgers during the ninth inning in Game Six of the 2020 MLB World Series at Globe Life Field on October 27, 2020 in Arlington, Texas. (Rob Carr/Getty Images)

ARLINGTON, Texas - The Los Angeles Dodgers have won their first World Series since 1988, beating the Tampa Bay Rays in Game 6 to end a pandemic-shortened season.

Dave Roberts finally has a World Series title to savor.

The Los Angeles manager guided the Dodgers to their first championship since 1988 on Tuesday night, beating the Tampa Bay Rays 3-1 to win in six games.

Roberts did what his seven predecessors — including Joe Torre and Don Mattingly — failed to do, bring a championship to long-starved Dodgers fans. He joins Hall of Famers Walter Alston and Tom Lasorda as the only managers to do so.

An emotional Roberts shared hugs with his players after the final out. 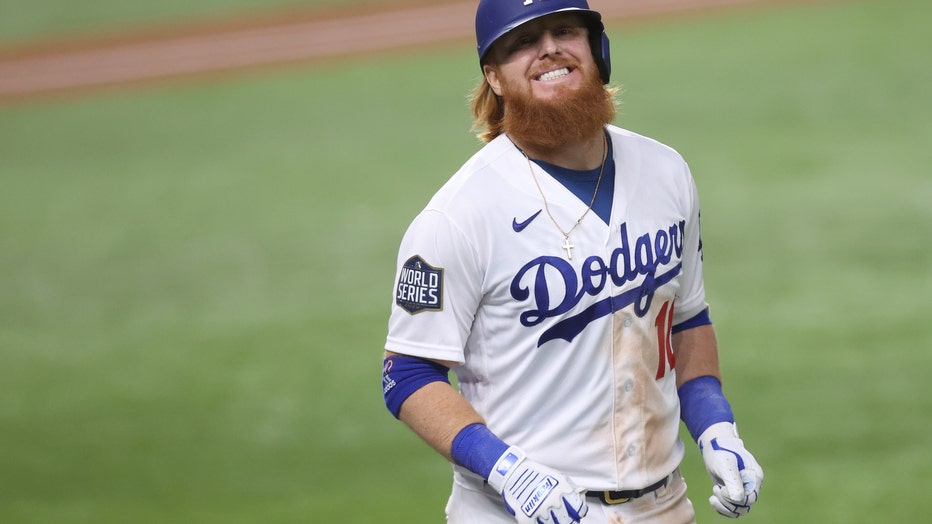 Justin Turner #10 of the Los Angeles Dodgers reacts after flying out against the Tampa Bay Rays during the sixth inning in Game Six of the 2020 MLB World Series at Globe Life Field on October 27, 2020 in Arlington, Texas. (Tom Pennington/Getty Images

He's taken the Dodgers to the playoffs in each of his five seasons, helping extend their streak of eight consecutive NL West titles. But they never reached their ultimate goal and Roberts endured his share of criticism along the way.

Roberts got booed in Game 5 by the few fans allowed at Globe Life Field in Arlington, Texas.

The mostly pro-LA crowd didn't want Clayton Kershaw to leave so soon, but Roberts stuck to his pregame plan. He wanted his veteran ace to face 20 or so batters (he faced 21) and turn it over to the bullpen. Kershaw left after getting the first two outs of the sixth. The Dodgers went on to win 4-2.

The fans' reaction was ironic. In previous years, they had excoriated Roberts for leaving Kershaw in too long only to watch disaster strike. They would rip the 48-year-old manager for his use of the bullpen, using only one reliever or too many. Roberts routinely got tagged with the blame when failure occurred.

But he rarely changed his disposition. Roberts is known for being a players' manager, full of trust in his roster. He's friendly and positive with everyone. Nowhere close to being the yeller that Lasorda was.

Roberts was at the helm for World Series defeats to Houston in 2017 and Boston in 2018; both times the opposition celebrated on the Dodgers' home field.

Roberts had overcome the odds before. He survived a diagnosis of non-Hodgkin's lymphoma 10 years ago. He battled his way up the depth chart to become the starting center fielder for the Dodgers in the early 2000s after spending most of the previous eight years in the minors. He wasn't the first choice to manage the team, either.

Roberts became the franchise's first minority manager in 2015. His late father was Black and his mother is Japanese. He was born in Okinawa, Japan, where his father was stationed with the Marines. Waymon Roberts died at age 68 in 2017.

Roberts had never managed anywhere before taking over one of baseball's most storied franchises. He was previously bench coach with the San Diego Padres.

As a player, Roberts was best known for The Steal in 2004. In Game 4 of the AL Championship Series, the Red Sox were facing elimination when he entered as a pinch-runner. Roberts stole second against Yankees closer Mariano Rivera and scored the tying run on a single. Boston won in 12 innings, overcame the Yankees and went on to win its first World Series since 1918, although Roberts didn't play in the Series.

The Dodgers were baseball’s best team throughout the abbreviated 60-game season. Now, under Roberts, they're world champions.