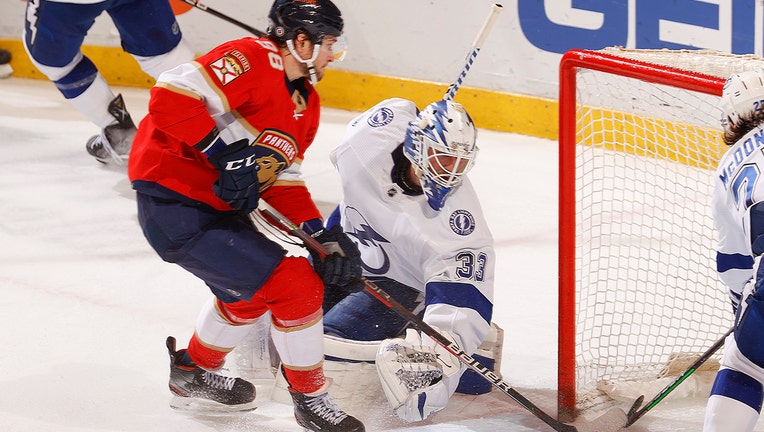 SUNRISE, FL - DECEMBER 30: Maxim Mamin #98 of the Florida Panthers scores a goal past Goaltender Maxime Lagace #33 of the Tampa Bay Lightning during second period action at the FLA Live Arena on December 30, 2021 in Sunrise, Florida. (Photo by Joel A

SUNRISE, Fla. - Anthony Duclair scored twice, Jonathan Huberdeau had a goal and four assists, and the Florida Panthers romped to a 9-3 rout of the NHL-leading Tampa Bay Lightning on Thursday night.

"We gave up too many chances to a really good team that wanted to beat us," Lightning coach Jon Cooper said, "and a team that we’ve handled and beat in the playoffs, and they haven’t forgotten. After tonight, I won’t forget this."

READ: NHL players express frustration over being barred from Olympics

"We have a lot of depth in our lineup when we’re all healthy and it shows," Huberdeau said.

Steven Stamkos, Zach Bogosian and Brayden Point scored for Tampa Bay, which lost for only the second time in 11 games this month. Maxime Lagace stopped 21 of 27 shots before giving way to Hugo Alnefelt, making his NHL debut, to start the third period.

Florida then scored twice to build a four-goal cushion after two periods. Mamin poked in the puck for his fourth goal at 17:26 after Lagace stopped Carter Verhaeghe on a breakaway. Lundell added his seventh goal at 19:23.

"We got a little sloppy at different times but I thought there was a little swagger. Some of the plays being made were pretty special, especially on home ice," Panthers interim coach Andrew Brunette said. "It felt good."

Point, on the power play, Duclair, Ekblad and Barkov (short-handed) all scored in the third period.

"You want to (throw) this game out and turn the page," Tampa Bay’s Mathieu Joseph said.

The Panthers went ahead 4-1 at 3:02 of the second when Luostarinen put in a rebound of Radko Gudas’ wrist shot from the right point.

Vatrano’s seventh goal, converting his own rebound from a shot off the crossbar, made it 3-0 at 14:21 of the first period.

Duclair took Brendan Montour’s long pass from the defensive zone and broke in alone on Lagace to open the scoring at 2:10. It was Duclair’s 11th goal and No. 100 in his career.