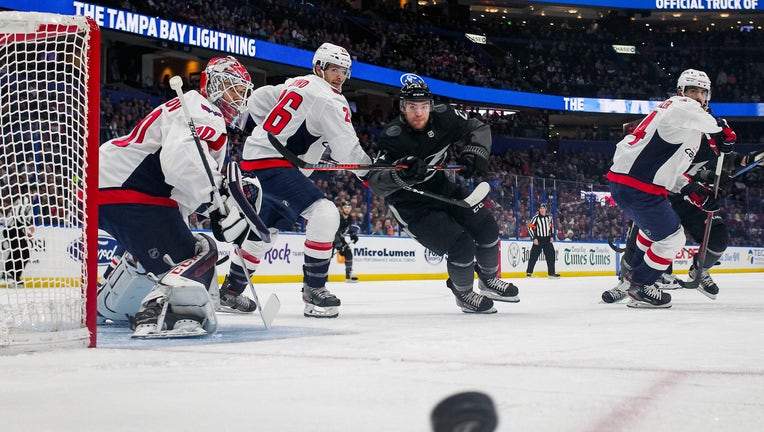 TAMPA, FL - DECEMBER 14: Brayden Point #21 of the Tampa Bay Lightning skates for the puck against goalie Ilya Samsonov #30 and Nic Dowd #26 of the Washington Capitals during the first period at Amalie Arena on December 14, 2019 in Tampa, FL (Photo by

Ellers scored from the left circle at 1:58 and Hathaway made it 3-1 from in-close.

Backstrom opened the scoring at 6:42 of the first. Rutta was getting ready to make a pass when teammate Ondrej Palat skated in front of him behind the net on a breakout play and had the puck go off his skate right to Backstrom in the low slot.

Samsonov kicked out his left leg to stop an in-close back-hander by Mikhail Sergachev early in the first. Kevin Shattenkirk sent a shot from a tough angle behind

Samsonov later in the period but the puck went through the crease along the goal line and went off the post.

Soon after Vasilevskiy made a short-handed glove save when Carl Hagelin's shot that went off Lightning defenseman Victor Hedman, Point tied it a 1 from the slot 5:45 into the second.

NOTES: Washington is 15-2-1 on the road. ... Backstrom has 14 goals and 61 points in 51 games against Tampa Bay. ... Kucherov assisted on Point's goal and has a 12-game point streak (nine assists, 18 points) against the Capitals.
UP NEXT
Capitals: At Columbus on Monday night.
Lightning: Host Ottawa on Tuesday night.
___
More AP NHL: https://apnews.com/NHL and https://twitter.com/AP_Sports