SEMINOLE, Fla. - Facing pressure as big as the state of Texas, the Rays’ Brett Phillips came through in the bottom of the ninth with a clutch hit in Game 4 that’ll forever be etched in team history.

His RBI single brought home Kevin Kiermaier and the stumbling Randy Arozarena, capping a back-and-forth game that tied the World Series at two games each

“To know the backstory is to know the story,” said Phillips during a post-game interview.

The story traces all the way back to the ballfields at Seminole High School.  Phillips is a 2012 graduate.  He was a standout athlete and so much more.

“First and foremost he's one of the finest young men I’ve ever been around,” said former Coach Dr. Jeff Pincus.  “Brought chills and, honestly, a couple tears to my eyes.”

Growing up in Pinellas County, Phillips was born to be a Rays fan.  He was acquired by the team this year in a late-season trade.

“In 2008, when these guys were in the World Series, I was in eighth grade watching them. Now to be a part of it, helping them win a World Series game, it’s special,” he said after the win.

“Crazy, crazy nervous. But again with my son, I had that gut feel he was going to do something special,” Brett Phillips Sr. said.  “He just always seems to come through. There’s something about Brett; it’s incredible.” 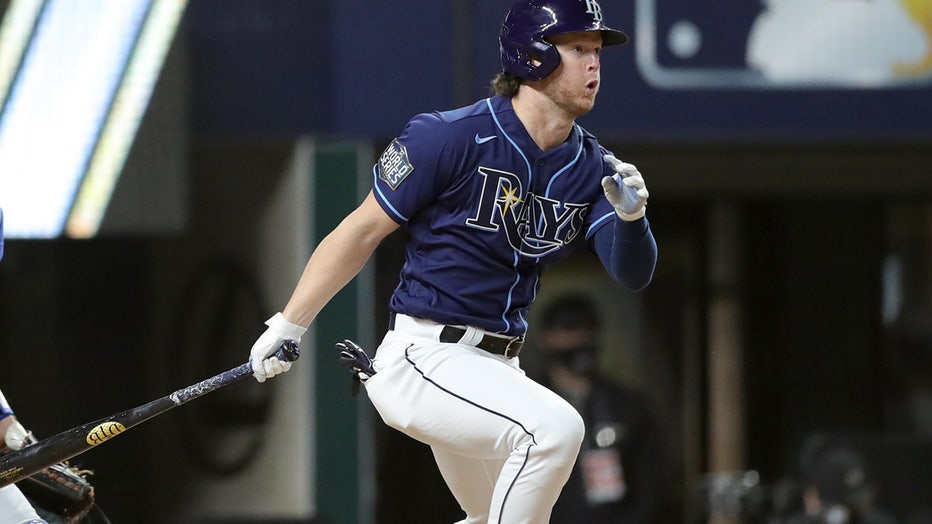 Brett Phillips of the Tampa Bay Rays hits an RBI single in the ninth inning during Game 4 of the 2020 World Series. (Photo by Kelly Gavin/MLB Photos via Getty Images)

The hit created a World Series memory that no Rays fan will ever forget.  It’s what every little kid practices in the backyard.

“It is just surreal for him to think as a kid and have these big dreams as a kid, and then here he is. It’s amazing,” said Phillips’ wife, Bri.

And that’s the backstory to this story.

“Golly, what a special moment, I just want to thank God for the opportunity,” Phillips said seconds after the game-winning hit.

Brett Phillips got so excited in the aftermath of his two-out single in the ninth inning of Game 4, the one that started a wild game-ending play with two errors and two runs for Tampa Bay in an 8-7 victory, that he got sick.