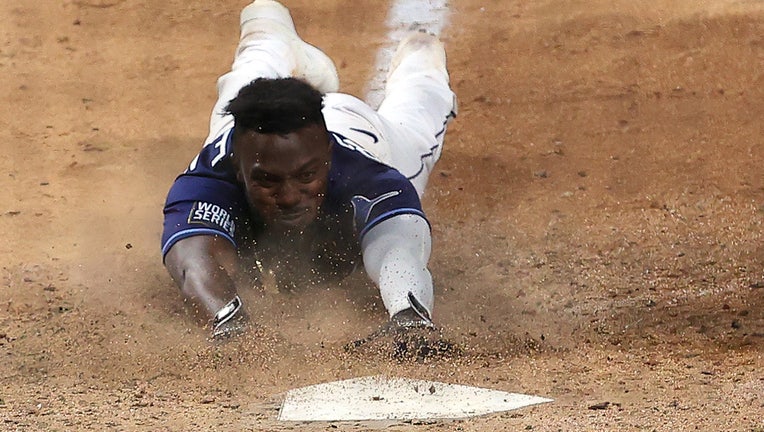 Randy Arozarena slides into home plate during the ninth inning to score the game-winning run. (Photo by Tom Pennington/Getty Images)

Is there anything this rookie can’t do?

The winning run the Cuban sensation scored in a frenetic ninth inning will have fans talking for years after the Tampa Bay Rays stunned the Los Angeles Dodgers 8-7 Saturday night, tying the matchup at two games apiece.

“Randy’s not used to having to run like that. Normally he’s just trotting,” Rays manager Kevin Cash said.

Those same folks might want to remember that much earlier, the 25-year-old outfielder passed Barry Bonds among others for the most home runs in a single postseason. He then joined the top of the list for hits as well.

Arozarena’s solo homer leading off the fourth opened the scoring for the Rays and was his ninth of the postseason, and sent him past the previous record of eight shared by Bonds (2002, San Francisco), Carlos Beltran (2005, Houston) and Nelson Cruz (2011, Texas).

None of those three won the World Series. But Arozarena and the Rays are even with the Dodgers and guaranteed to go deeper in this World Series than in the franchise’s only other appearance, a five-game loss to Philadelphia in 2008.

“It feels really good to be able to break the record and be on top of that record board,” Arozarena said through a translator. “But the most important thing is that we got the win and we came out victorious in such a tough game like today.”

His third hit of the night, a single leading off the sixth, set up Brandon Lowe’s three-run homer that sparked the seesaw final four innings.

The only time Arozarena didn’t reach base was in the seventh, when his inning-ending double play in the seventh came two batters after Kevin Kiermaier’s tying solo homer.

Then came probably Arozarena’s most important at-bat, when the Tampa Bay sparkplug drew a seven-pitch walk off closer Kenley Jansen with two outs in the ninth — Arozarena coolly took a close pitch with two strikes that was just a tad outside.

That set up the dramatic game-ending sequence on Brett Phillips’ RBI single.

Center fielder Chris Taylor bobbled the hit, chased after the ball and threw toward the plate as Arozarena rounded third. Arozarena appeared to be an easy out when he stumbled and fell halfway to home, but catcher Will Smith couldn’t the relay from first baseman Max Muncy, allowing Arozarena to dive into the plate.

“I was actually trying to get back to third base. We had already tied the game. I was trying to get into a rundown. Then obviously once the ball got past him, I turned around and scored,” he said.

Down in the dirt, Arozarena kept pounding the plate as the Rays rushed out to celebrate with him. His eighth homer of this postseason came off Jansen a night earlier, a throwaway run in a 6-2 loss in Game 3.

“I knew I hit the home run off him yesterday,” Arozarena said. “I was just going up there being patient and trying to find something I could hit. I knew I was facing a good pitcher. He threw me a ball in the dirt, so I took it.” 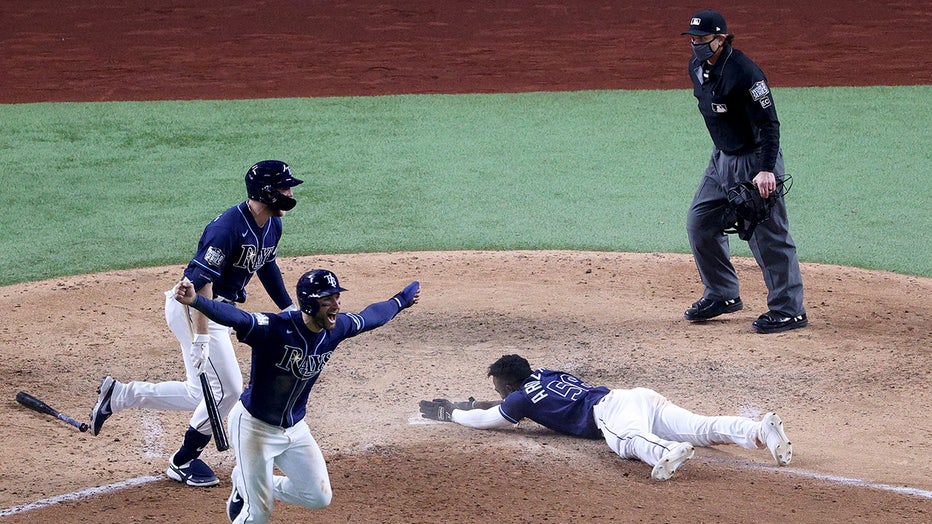 With the series extended to at least six games, Arozarena has a good chance to break the record of 26 hits in one postseason he now shares with Pablo Sandoval, who did it in 17 games when San Francisco beat Kansas City in Game 7 of the 2014 World Series. Arozarena has played 18 games, with more on deck.

Cash might argue all the homers and the hits are overshadowing another aspect of Arozarena’s impact.

“We’re talking about Randy offensively for really good reasons because he’s done so much damage in the postseason,” Cash said. “But we’ve seen him show patience. He’s got just a great idea of what pitchers are trying to do to him.”