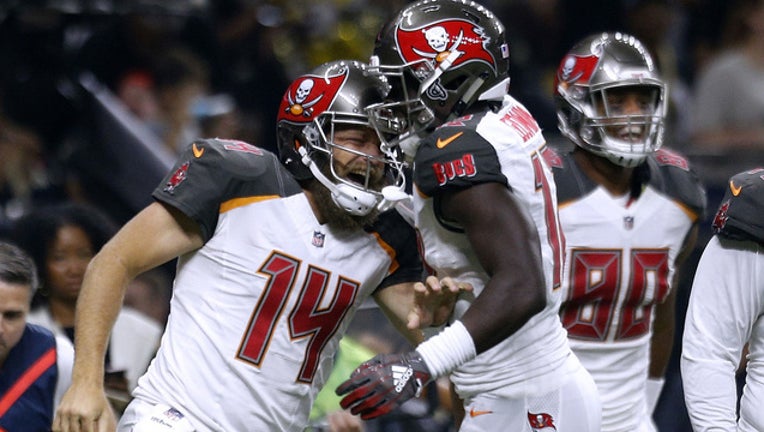 Ryan Fitzpatrick celebrates a touchdown with Justin Watson during the first half against the New Orleans Saints. (Photo by Jonathan Bachman/Getty Images)

NEW ORLEANS (AP) - Ryan Fitzpatrick backpedaled giddily for about 20 yards as he watched DeSean Jackson come down with a 36-yard touchdown pass over the middle. The journeyman quarterback then turned toward the Tampa Bay Buccaneers sideline and triumphantly thrust his arm in an upward arc.

Time will tell if the Bucs are on a similar trajectory this season, but there's no denying they're off to an encouraging start.

Fitzpatrick highlighted a 417-yard, four-touchdown performance with two scoring strikes of more than 50 yards, and the Buccaneers stunned the Saints 48-40 on Sunday.

Fitzpatrick completed 21 of 28 passes without an interception and also ran for a short touchdown, bowling over free safety Marcus Williams on his way into the end zone.

"I hope somebody had him in fantasy because he went crazy today," Bucs receiver Mike Evans said of Fitzpatrick. "And he was running the ball - phenomenal game. One of the most complete games I've seen."

Coming off a playoff appearance and hosting a team that won only five games last season, the Saints were among the more heavily favored teams in Week 1. But some of the Saints' defensive players who were instrumental in New Orleans' success a season earlier had a miserable start to 2018.

Saints cornerback Marshon Lattimore, the 2017 defensive rookie of the year, had trouble covering Evans, who caught seven passes for 147 yards, including a 50-yard touchdown that put the Bucs up 41-24 late in the third quarter.

"It isn't going to get me down. Everybody gets beat," Lattimore said. "We needed to get slapped in our face one good time to see we're not on a level we think we're on."

A season ago, Evans was so frustrated with coverage by Lattimore that he hit him after the whistle and wound up being suspended a game for it. After this latest meeting, Evans said, "I like my odds against anybody, not just him."

Jackson caught scoring passes of 58 and 36 yards to highlight his five-catch, 146-yard day before leaving with a concussion.

"The talent level in that huddle, with guys that can go up and make plays, it's a pretty special group," Fitzpatrick said. "I'm glad we showed it today, but now it's about consistency."

The Saints put together a frantic offensive flurry in the fourth quarter, scoring twice on touchdowns by Alvin Kamara - the first a 1-yard run and the second a 7-yard catch, both followed by 2-point conversions. That cut the Saints' deficit to eight points with 3:31 to go.

On third-and-11, Fitzpatrick needed to make one more play - and did. He scrambled to his left for 12 yards at the two-minute warning. With New Orleans out of timeouts, Fitzpatrick was able to run out the clock.

"That's the type of game we've played in year's past as a .500 team," Saints coach Sean Payton said, alluding to three straight 7-9 seasons from 2014-16 before the Saints returned to the playoffs with 11 wins in 2017. "Nothing carries over from last year. I've said it a millions times."

The combined 88 points set an NFL record for a regular-season opener, narrowly eclipsing Philadelphia's 45-42 victory over Washington in September of 1947.

New Orleans' Drew Brees was 37 of 45 for 439 yards and three TDs. Kamara, the 2017 offensive rookie of the year, caught nine passes for 112 yards and one touchdown to go with two touchdown runs. Receiver Michael Thomas set a single-game franchise record by catching 16 passes for 180 yards and a TD, but turned the ball over on a fumble across midfield in the third quarter.

Tampa Bay scored on six of its first seven possessions. The only Bucs drive of the first half that did not produce points was when they ran out the final 55 seconds before halftime. Tampa Bay did not punt until their eighth drive about halfway through the third quarter. The Bucs finished with eight passing plays of 20 or more yards.

The Saints punted only once in the first half and trailed 31-24 at halftime after Thomas' 6-yard touchdown catch.

With Mark Ingram serving a four-game suspension for use of a banned substance, the Saints brought in running back Mike Gillislee after he was cut by New England. In his Saints debut, Gillislee fumbled in the second quarter on a hit by Vernon Hargreaves. Cornerback Justin Evans scooped up the loose ball and ran it back for a 34-yard TD.

Buccaneers: Hargreaves was helped to the locker room with a shoulder injury in the fourth quarter.

Saints: New Orleans did not announce any injuries.